There were reports of voter intimidation by Trump supporters in Brooklyn and the Bronx, but no reports of major widespread issues at polling places throughout New York, New Jersey or Connecticut all day

Tri-state officials hoped early voting and absentee ballots would help limit typical Election Day issues, with voter turnout poised to break records locally and across much of the United States. Going into the final stretch Tuesday evening, most of their hopes had been realized.

Many polling places throughout New York and New Jersey reported shorter lines than in previous presidential elections, thanks in large part to widespread participation in mail-in and early voting. New Jersey had actually reached 88 percent of 2016's total turnout before Election Day even started, as the state was set to blow past what were record participation levels that year.

There were a few sporadic issues that popped up, especially earlier in the morning. In the city, a missing poll coordinator allegedly kept lines of people outside in 40-degree weather in Brooklyn, while voters at a site in Port Jefferson reported mostly broken machines.

Early gripes also included reports of voter intimidation in the Bronx and Brooklyn, where a person in a Trump-decorated pickup truck and another voter were engaged in mutual harassment, the NYPD said. The department said cops spent nearly an hour trying to resolve the issue. Both the Trump supporter and other voter were offered the opportunity to file a police report, which both declined.

There were also complaints of connectivity issues at various polling sites throughout the city, long lines (with up to 45-minute waits in places like Astoria around lunchtime) made longer by efforts to keep socially distant and voter roll verification issues. However, no major widespread issues were reported at polling sites in New York going into the evening hours. At one location on the Upper East Side that had lines wrapped around the block both in 2016 and during early voting this year, it was much calmer Tuesday, with voters trickling in and only very short lines, if any, formed.

While most city polling locations opened on time, there were some that opened later than 6 a.m., which NYC Deputy Mayor J. Phillip Thompson called "unacceptable." He said those problems have been reported to the city's Board of Elections and vowed to follow up to ensure smoother operations for future elections.

Are you experiencing problems at the polls? Let us know

Earlier Tuesday, Mayor Bill de Blasio, who condemned early voting problems in New York City like extensive lines and limited hours, said, "We need a different and better Board of Elections going forward." Still, he urged New Yorkers to take advantage of the system they have, saying, "Our future is riding on this election."

The mayor was later seen handing out donuts to voters waiting in line in South Ozone Park in the afternoon.

More than 500 volunteers were dispatched across the city's polling sites to watch for potential intimidation and harassment. New York Attorney General Letitia James said she will work with local election boards and law enforcement to “swiftly address any incidents of intimidation or harassment.”

The NYPD was also out in force; cops took down a "Trump or Communism" sign from a polling entrance in Manhattan. Translation services are also being provided at 52 different polling sites to assist New York City's registered voters whose first or preferred language is not English.

Elsewhere in the state, parts of Suffolk County reported lines of around an hour and a half. Poll workers blamed the number of districts voting at those locations, and two registration stations were also down due to a lack of paper. Still, the majority of polling sites did not report longer than usual lines or any major problems. 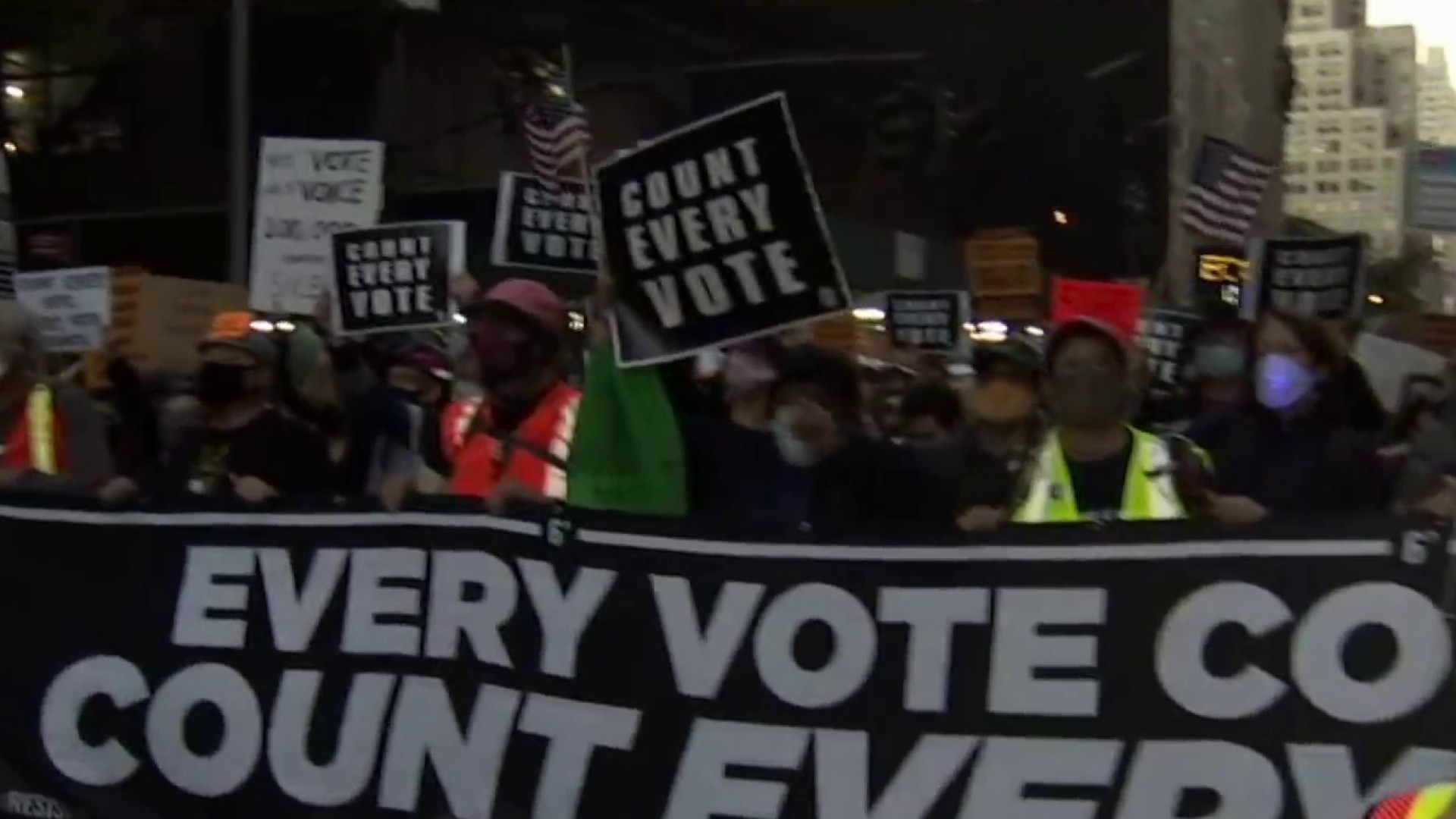 Multiple Arrests Made After Fires Set During Protest Marches Across Manhattan

In New Jersey, some polling sites bought in members of the state's National Guard to help count ballots as a way of preventing delays or problems. But similar to New York, there were few issues reported. There were multiple locations, like those in Fort Lee and Paramus, that said at any given time throughout the day, there were more poll workers than voters present.

There were some longer delays reported in Connecticut, which did not have early voting (but the state said that nearly half of voters planned on doing mail-in or absentee ballots). Polling sites in Stamford and Hartford reported lines that took as long as two hours, but many areas throughout the state did not face the same problems.

Officials say the recent election reforms and the swath of mail-in and early ballots may have helped contribute to a smoother Election Day. But they've also sown confusion.

Already this year, early voters waited in polling lines several hours long and an estimated 100,000 New York City voters were sent absentee ballots with the wrong names and addresses printed on the return envelopes. The city's Board of Elections said it would automatically mail affected voters corrected absentee ballot packets with instructions.

Election reforms approved last year allowed for more than 2.5 million registered New Yorkers to vote early. According to the state Board of Elections, another million absentee ballots were also returned by Monday. New York doesn't open those until a week after Election Day, so some key local race results likely won't be finalized for a number of days.

It's not yet clear if the major differences of this year's vote - higher than normal absentee voters and first-time early voting in a presidential race - will smooth or further stress the system. Polls in New York close at 9 p.m. Tuesday; anyone in line at that time will vote. Any ballots postmarked by Tuesday will be counted.

On Monday, Gov. Phil Murphy said he felt the hybrid of mail-in and in-person voting was working well for New Jersey. While most voted by mail, he said each of the state's 21 counties had been asked to have at least 50 percent in-person capacity available and at least one location to accommodate voter preferences.

While lines seemed to be shorter in New York City, many voters on Long Island found wait times longer than an hour. Pei-Sze Cheng reports.

"It has been smooth and I expect it will continue to be," Murphy said Monday. "I am extremely confident that we have our county clerks and local election officials at the ready. I do not expect any intimidation."

In addition to state and local safeguards on Election Day, the U.S. Department of Justice said it would have federal personnel from the Civil Rights Division in two New Jersey counties - Bergen and Middlesex - to "monitor for compliance with the federal voting rights laws."

Over in Connecticut, election officials have urged voters to get their absentee ballots turned in as soon as possible. All ballots must be returned to drop boxes or polling sites by 8 p.m. Tuesday, regardless of any postmark date.