For months, New Yorkers heard pitches from top contenders vying to become the next mayor of the five boroughs before they have to decide how they're going to vote.

With less than 48 hours until Election Day, Nov. 2, Democratic nominee Eric Adams and Republican nominee Curtis Sliwa sat down with NBC New York for one-on-one interviews and opened up on a personal level not seen in heated debates about the vaccine mandate, gun violence and other contentious topics.

For 61-year-old Adams, running for mayor while being the Brooklyn Borough President can often put him in high-stress situations. When the going gets tough, Adams says he focuses on his breathing. He did it on stage at the debate on News 4 with other primary candidates breathing down his neck.

"Four breaths in from your stomach, and eight breaths out," he explained during his walkthrough of Brooklyn Heights with News 4 politics reporter Melissa Russo on how he keeps his mind and body calm. It's something he wants public schools to teach children if he becomes mayor.

"It's unbelievable how something as important as breathing is not taught anywhere. You do it 10 times and it's amazing how it slows down your mind and brings you at peace," Adam said.

The former NYPD police officer and long-time public servant said he wants to evaluate every child in public schools for gifted programs and for learning disabilities because he doesn't want any student to struggle as he did without resources.

"I used to hear the alarm clock goes off and I was traumatized" because he dreaded going to school, he said. Adams has previously been open about his dyslexia, a learning disorder characterized by difficulty reading, but he has not been officially diagnosed.

Adams said he got help processing words when he made it to college. Also to improve the overall health of school children, Adams says he hopes to promote healthier eating habits and cut down on extra-processed foods.

"It's not about if you get enough calories, it's that you get the right calories," he said. Adams, who stopped eating animal products in 2016 and said it reversed his diabetes, added that he won't bad sugary drinks or foods with high salt content like Mayor Michael Bloomberg. 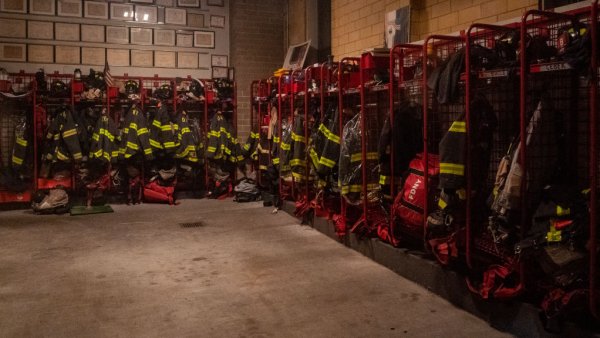 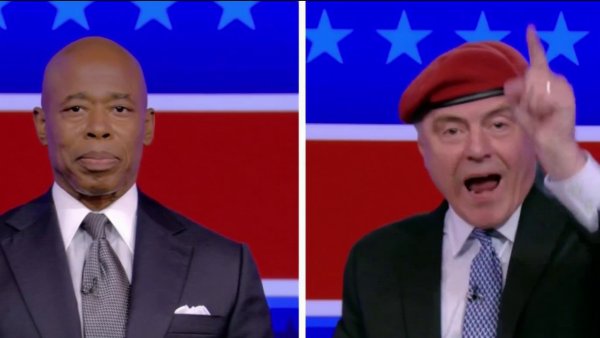 He also promised to improve on current Mayor Bill de Blasio's performance, in which he gave a B+ rating during one of the debates. "I'm not a good grader," he joked.

Sliwa didn't let the potential results, or even a fractured arm from getting hit by a yellow cab, stop him from campaigning until the very end.

From his 350-square-foot studio apartment, the Guardian Angels leader showed the big heart that he has for New York City as well as for all things that live within it, including 15 rescued cats.

Ajax the cat is Sliwa's favorite, he told Russo. The 67-year-old added that Ajax helped him while he recovered from prostate cancer. When asked what his home says about what kind of mayor he will be, he said "we have to learn to do more with less."

The tiny Upper West Side apartment he shares with his wife and cats is all that he can afford after paying $15,000 a month in child support. He vowed to treat New Yorkers as well as he treats his beloved animals.

"The way you treat your animals is how you treat people in society. We don't treat animals well, our disturbed people well, our homeless people well," Sliwa said, promising to support all New Yorkers.

In recent weeks, Sliwa tried to attract votes from city workers who oppose Mayor de Blasio's vaccine mandate -- which went into effect a day before Election Day -- but he wanted to be clear that he's not anti-vaccine.

"There's a segment that is anti-vax. That's not me and a lot of people out there. We're anti-mandate," he said.

But with the number of NYC Democrats greatly outweighing the number of Republics, it's unlikely Sliwa can win the majority of votes in his own neighborhood. Still, it doesn't stop him from trying by citing how he will tackle crime and homelessness.

When asked why he would be a preferable candidate to Adams, a former police officer, Sliwa said, "they realize, this guy does not fly the Trump flag. it's a different kind of Republican. He's also an independent. He rides the subways and walks the streets."

If cats and dogs could vote, Sliwa said "I would win overwhelmingly."