Top aides to President Joe Biden on Sunday began talks with a group of moderate Senate Republicans and Democrats on a $1.9 trillion coronavirus relief package as Biden faces increasing headwinds in his effort to win bipartisan backing for the initial legislative effort of his presidency.

Lawmakers on the right question the wisdom of racking up bigger deficits while those on the left are urging Biden not to spend too much time on bipartisanship when the pandemic is killing thousands of Americans each day and costing more jobs amid tightening restrictions in many communities.

At least a dozen senators met for an hour and 15 minutes in a virtual call with White House National Economic Council director Brian Deese and other senior White House officials. Many hope to approve a relief package before former President Donald Trump's trial, which is set to begin in two weeks, overtakes Washington’s attention.

“There was not a hint of cynicism or lack of commitment to at least trying to work something out,” King said. “If they were just trying to jam this through, I don’t think it would have interrupted the Packers game.”

King told reporters that there was “absolute consensus” among the group that the No. 1 priority was to speed up the distribution of vaccinations and expanding COVID-19 testing and tracing.

The White House did not seem to budge on breaking up the package or reducing the overall price tag, even as it pushes for bipartisan support. There was also no discussion of pushing it through on a procedural move that could be done without Republicans, King said.

One key Republican, Sen. Susan Collins of Maine, said afterward, “It seems premature to be considering a package of this size and scope.”

In an interview with LX News, Dr. Anthony Fauci addressed the multiplying mutations of the coronavirus, including a U.K. variant that is thought to be more deadly as well as more contagious. Watch the full interview with Dr. Fauci on NBCLX this Tuesday at 8 a.m. and 8 p.m. ET.

Collins said instead she would pull the bipartisan group together “and see if we could come up with a more targeted package.” She said in a statement that a bill with additional funding for vaccine distribution "would be useful."

Senators from both parties raised questions about the economic aid provisions, particularly making direct $1,400 payments to Americans more tailored to recipients based on need.

Many of the senators are from a bipartisan group that struck the contours of the last COVID-19 deal approved late last year. They were joined on the call by the two leaders of the House’s Problem Solvers Caucus, Reps. Josh Gottheimer, D-N.J., and Tom Reed, R-N.Y., who were also part of earlier discussions.

Director of the National Economic Council Brian Deese spoke with the media on Friday and outlined the details of President Joe Biden’s executive order on helping provide food assistance to Americans.

Sen. Jeanne Shaheen, D-N.H., told The Associated Press that no red lines were drawn. But she added there was consensus among the call's participants “that the more targeted the aid is the more effective it can be."

Overall, “it was a conversation and it was not about drawing lines in the sand," Shaheen said. “It was about how can we work together to help the people of this country.”

Out of the gate, Biden has made clear that quickly passing another round of coronavirus relief is a top priority as he seeks to get the surging pandemic and the related economic crisis under control, while demonstrating he can break the gridlock that has ailed Congress for much of the last two presidencies.

Biden and his aides in their public comments have stressed that his plan is a starting point and that finding common ground on relief should be attainable considering the devastating impact the pandemic is exacting on Democratic and Republican states alike. With more than 412,000 dead and the economy again losing jobs, Biden has argued there is no time to lose.

“We’re going to continue to push because we can’t wait,” said White House principal deputy press secretary Karine Jean-Pierre. “Just because Washington has been gridlocked before doesn’t mean it needs to continue to be gridlocked

Central to Biden’s campaign pitch, beyond healing the wounds created by Trump’s presidency, was that he was a proven bipartisan dealmaker, one who would draw upon his decades in the Senate and deep relationships with Republicans to bridge partisan divides.

Some Biden advisers watched with worry as the Senate, just days into the president’s term, was already in gridlock as to a power-sharing agreement, with Republican leader Mitch McConnell refusing to budge on a demand to keep the filibuster intact. If the Senate twists itself in knots over its very basics, some Democrats wondered, how could it reach a big deal?

More on US Economy and COVID-19 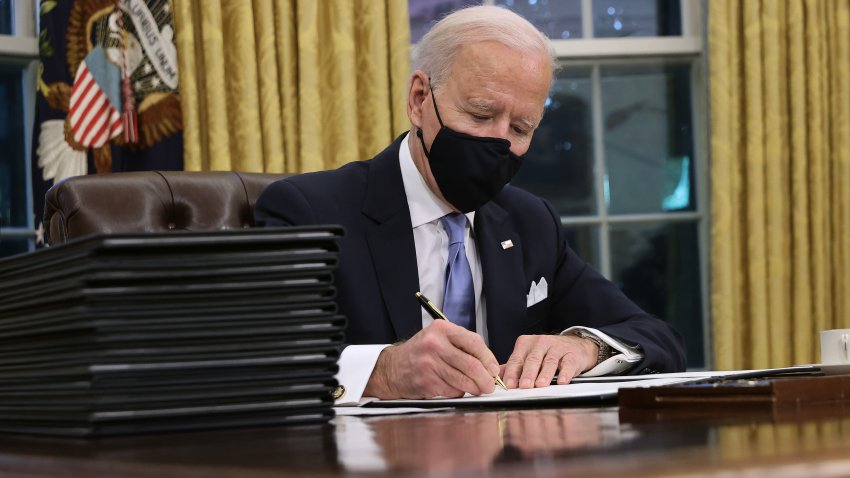 Additionally, some of Biden’s preferred methods to lobby and schmooze have been curtailed by the pandemic. Though his address book remains one of the best in Washington, it stands to be far more difficult for Biden — at least for the foreseeable future — to engage in the face-to-face politicking that he prefers.

Sen. Mitt Romney, R-Utah, ahead of the meeting, raised concerns again about the wisdom of the government engaging in massive deficit spending.

“If we get beyond COVID, I believe that the economy is going to come roaring back,” Romney told “Fox News Sunday.” “And spending and borrowing trillions of dollars from the Chinese, among others, is not necessarily the best thing we can do to get our economy to be strong long-term.

Sen. Bernie Sanders, the Vermont independent who caucuses with Democrats, said he didn’t have high hopes for negotiations leading to Republican support and suggested Democrats may need to use budget reconciliation to pass it with a simple majority. The procedural tool would allow Democrats to push the package to approval without the 60-vote threshold typically needed to advance legislation past a filibuster. Republicans used the same tool to pass tax cuts during the Trump administration.

“What we cannot do is wait weeks and weeks and months and months to go forward,” Sanders said. “We have got to act now. That is what the American people want."