The 63-year-old Democrat will not run for public office again, his top aide, Melissa DeRosa, who also resigned amid the scandal, said Monday: "He looks forward to spending time with his family and has a lot of fishing to catch up on. He is exploring a number of options, but has no interest in running for office again"

Gov. Andrew Cuomo held fast to his insistence he had done nothing wrong in his final address to New Yorkers as he resigns amid a sexual harassment scandal, pledging the "truth" is still to come even as he endorsed his successor.

The Democrat has at every turn personally and through his outside counsel eviscerated both the full account of the AG report, which found credible evidence he sexually harassed 11 women and retaliated against at least one, and accusers.

Cuomo, 63, couldn't get away from that Monday as he said farewell, marking a meteoric downfall for a politician whose rise was equally meteoric last year. Read the full transcript of his remarks right here as provided by his office.

"Of course, everyone has a right to come forward. And we applaud their bravery and courage in doing so. But allegations must still be scrutinized and verified, whether made by a woman or a man, that is our basic justice system," he said. "There was a political and media stampede. But the truth will out in time. Of that, I am confident."

Cuomo has offered few hints about his future plans or where he'll live after leaving the Executive Mansion, though top aide Melissa DeRosa, who also resigned amid the fallout over the attorney general's bombshell sexual harassment report, said the three-term electee had no plans to pursue further public office.

“Between HUD, AG & his time as governor, Andrew Cuomo has spent nearly 25 years in public service. And the way he does it, it’s 24 hours a day, 7 days a week," said DeRosa, who also resigned amid the fallout over the attorney general's bombshell sexual harassment report. "He looks forward to spending time with his family and has a lot of fishing to catch up on. He is exploring a number of options, but has no interest in running for office again.”

Cuomo is set to end his shortened third term at 11:59 p.m., just under two weeks after he announced he would resign rather than face a likely impeachment battle over sexual harassment allegations. He sent in his three-sentence letter of resignation to state Senate Majority Leader Andrew Stewart-Cousins and Assembly Speaker Carl Heastie Monday evening, concluding it saying it "has been my pleasure to serve with you both."

New York Gov. Andrew Cuomo delivered his final address to the people of New York ahead of his scandal-plagued resignation.

Defiant until the end, he reiterated the remarks he first made at the end of his initial resignation announcement (albeit a brief one).

"There are moments in life that test our character, that ask us are we the person we believe we are or are we the person we try to be at our best. You know me, I am a fighter, and my instinct is to fight this because it is unfair and unjust in my mind," Cuomo said. "But you also know that I love New York, and I serve you. That is the oath that I took, and in this moment, I believe that my service comes first."

"Prolonging this situation could only cause governmental paralysis and that is just not an option for you and not for the state, especially now. There is real work to be done," he added.

He relinquishes his grip on government to Lt. Gov. Kathy Hochul in a midnight power transfer that'll break another glass ceiling for women in state politics. Hochul is scheduled to be sworn in as New York’s first female governor just after midnight in a brief, private ceremony overseen by the state's chief judge, Janet DiFiore.

She plans to address the people of New York as governor for the first time Tuesday afternoon.

Who Is Kathy Hochul? 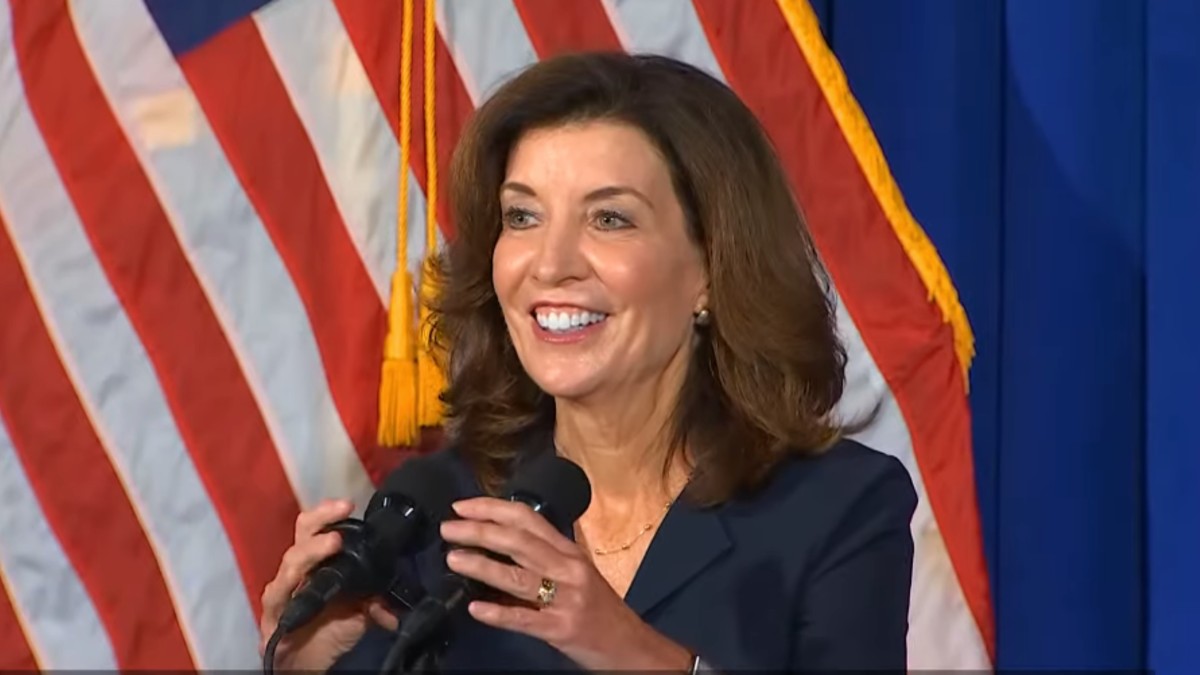 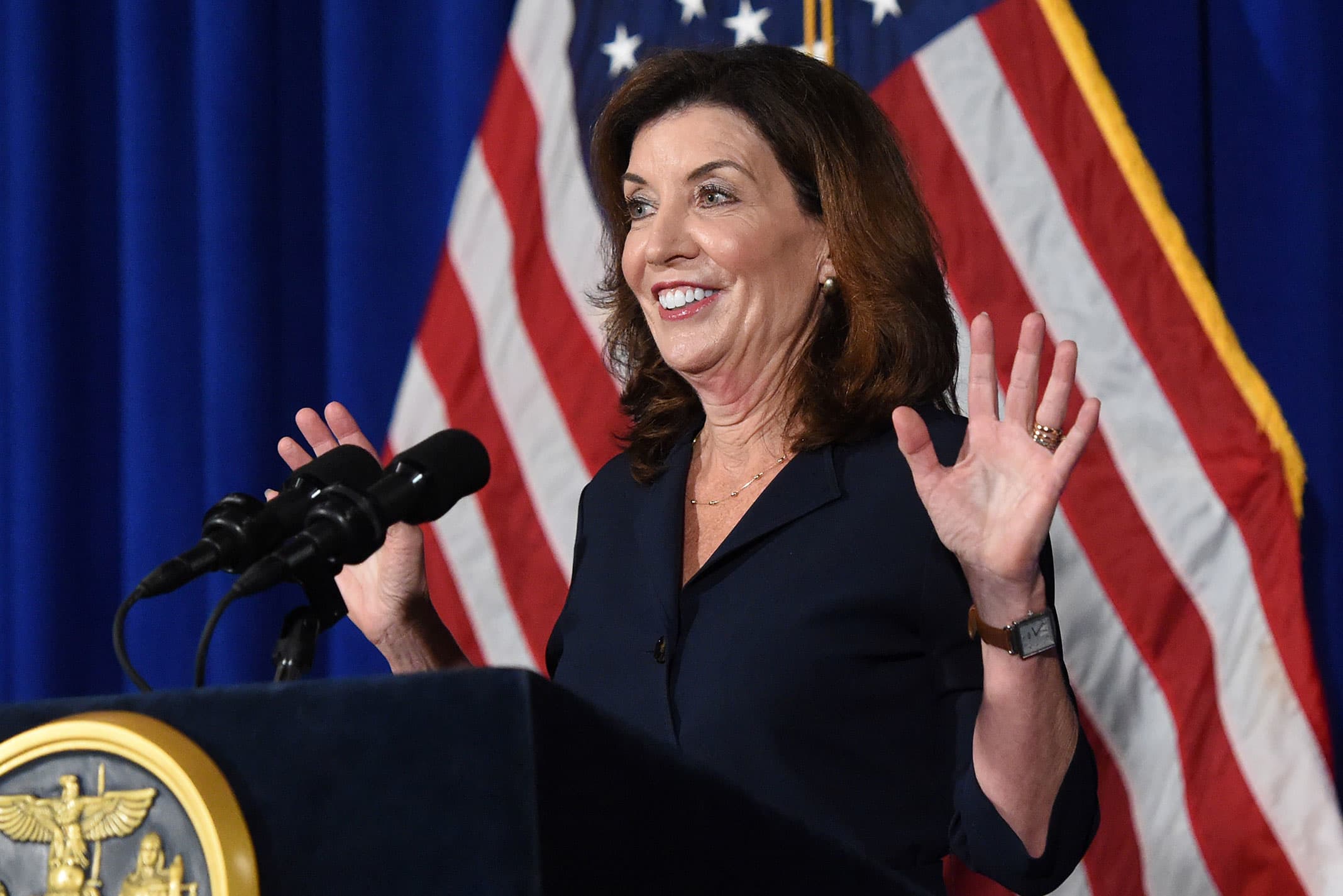 The leadership switch comes amid the aftermath of Henri, which narrowly missed Long Island on Sunday but was dumping potentially dangerous amounts of rain over parts of the Catskill Mountains and Hudson River Valley, even after it was downgraded to a tropical depression.

The storm drew Cuomo back out into public view over the weekend, albeit briefly. He gave two televised briefings — warning New Yorkers to take the storm seriously with the same mix of scolding and reassurance that once made his daily COVID-19 briefings popular.

No other politician in recent memory has plunged from hero to zero more expeditiously on a public stage. The outgoing governor followed the same steep curve he showed in many of those earlier COVID briefings. He just went backward.

Perhaps if the storm had been catastrophic Cuomo might have been tempted to put off his resignation. But as the potential for danger diminished, he said there would be no change in his plans. “My final day is tomorrow," he said Sunday.

The vast majority of registered New Yorkers on both sides of the political aisle were ready to see him go, according to recent polls. 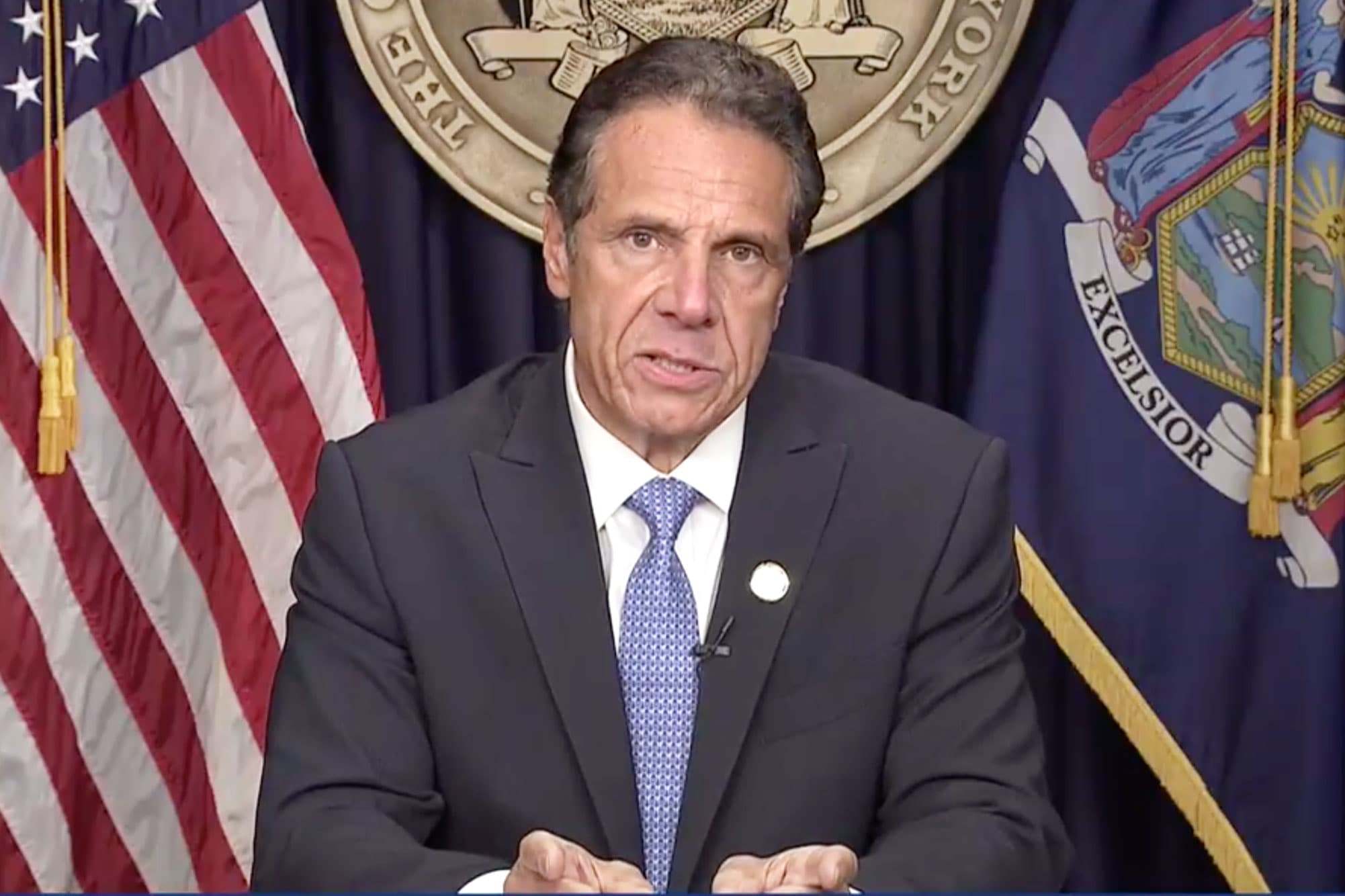 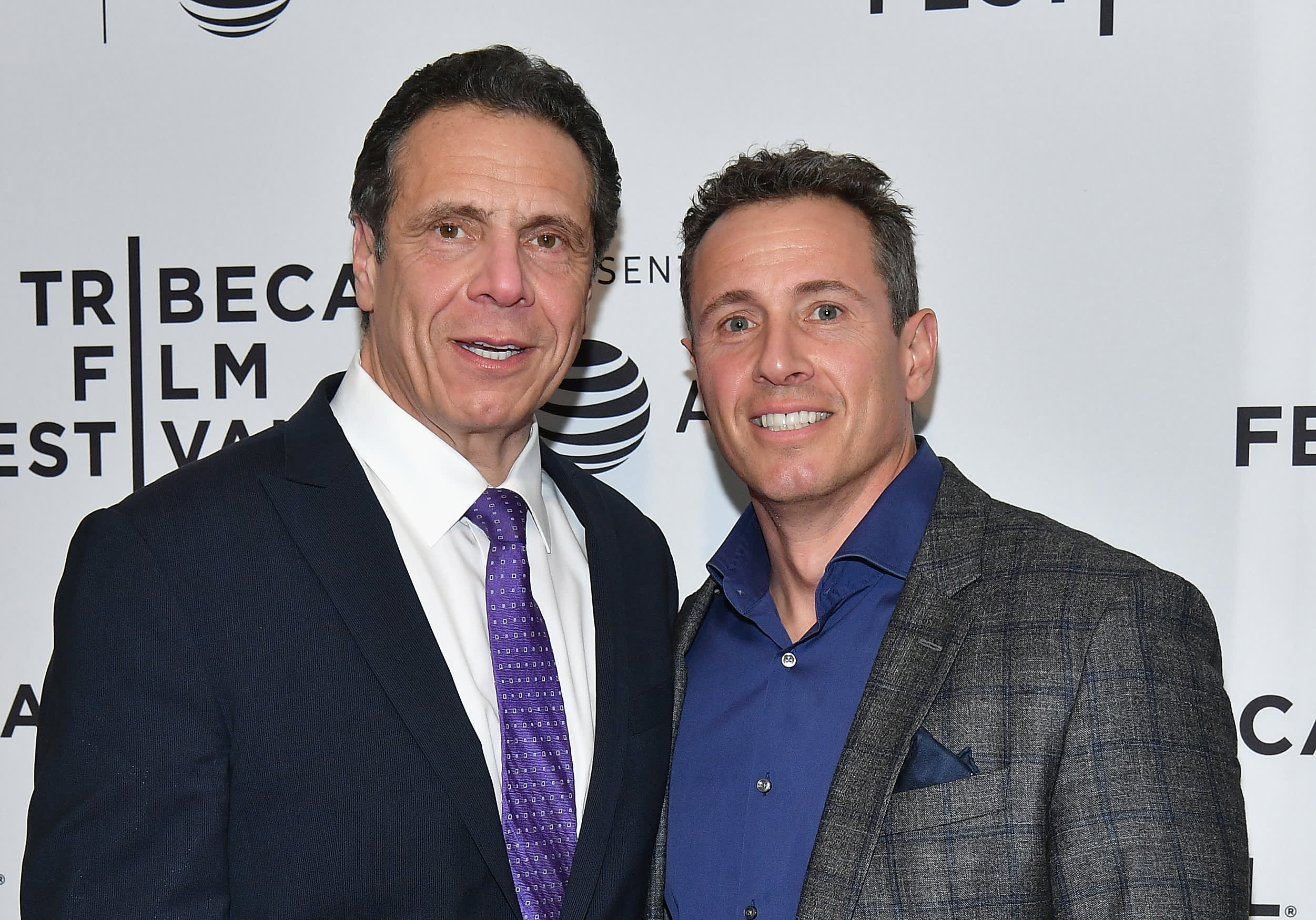 Chris Cuomo and His Brother: ‘I Tried to Do the Right Thing' 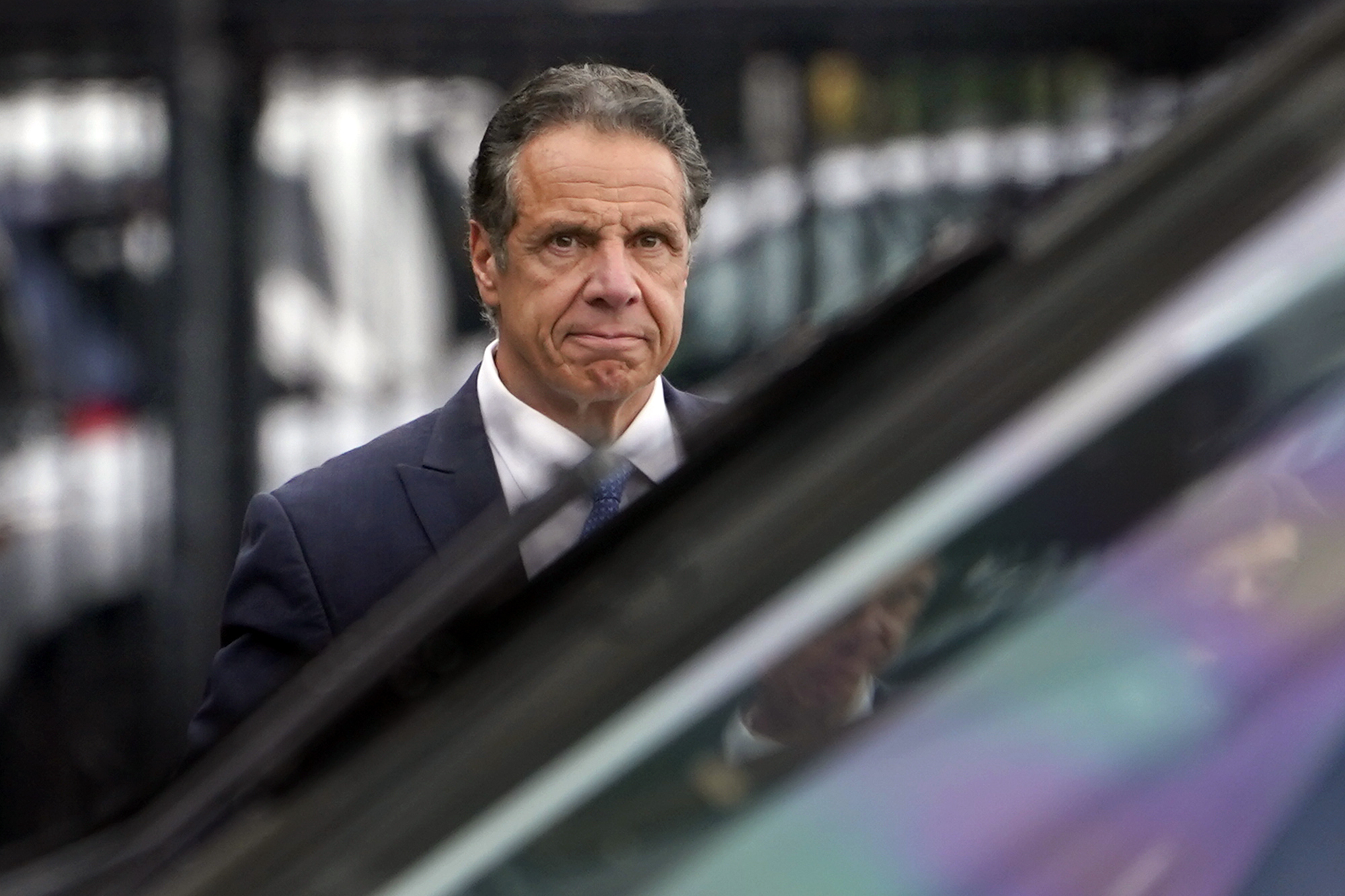 Cuomo’s resignation comes after an independent investigation overseen by New York Attorney General Letitia James concluded there was credible evidence he'd sexually harassed at least 11 women, including an aide who said he groped her breast and has since filed a complaint with the Albany County Sheriff's Office.

Investigators also said Cuomo’s senior staff retaliated against at least one of those women and worked to undermine the credibility of others.

Cuomo insists he didn’t touch anyone inappropriately and called the allegations “unfair” and “untruthful,” but said he wouldn’t force the state to endure an impeachment trial he couldn’t win. He and his outside counsel, Rita Glavin, have steadfastly and aggressively refuted the findings of the AG report even after the resignation announcement. Glavin did so most recently Friday, for the third time.

Andrew Cuomo's personal attorney held a virtual press conference in some of the final hours before his resignation to renew claims of "inaccuracies" in the independent harassment probe and ask for edits to the 165-page report. NBC New York's Jonathan Dienst reports.

The state legislature stopped its impeachment proceedings shortly after Cuomo's resignation, but the governor separately faces a legislative investigation into whether he misled the public about COVD-19 deaths in nursing homes to protect his reputation as a pandemic leader and improperly got help from state employees in writing a pandemic book that may net him $5 million.

In his resignation speech Aug. 10, he spoke with pride about his record of legalizing same-sex marriage, expanding paid family leave and boosting the statewide minimum wage to $15.

Hochul, a 62-year-old Democrat, inherits immense challenges as she takes over an administration facing criticism for inaction in Cuomo’s distracted final months in office.

COVID-19 has refused to sufficiently abate amid the ongoing spread of the delta variant. Schools are set to reopen in the coming weeks, with big decisions to be made about whether to require masks for students or vaccination for teachers. Cuomo had left those calls to individual school districts. (New York City has separately said it would require masks in school and announced a vaccine mandate for public school teachers and staff earlier Monday.)

In the days after Cuomo announced his plans to resign, Hochul tepidly stepped into the waters around some of these controversial issues. The same week she became the incoming governor, Hochul told "Today" that a statewide school mask mandate was coming, along with a housecleaning for state government as far as staff.

She is expected to announce more developments on those fronts as early as this week once the transition of power is complete.

Apart from the ongoing COVID crisis, Hochul will also have to confront a devastating budgetary crisis worsened by the pandemic, soaring increases in crime, especially in New York City, and the legalization of recreational marijuana. She says she will run for New York governor after finishing Cuomo's term.

Lt. Gov. Kathy Hochul will be taking over for Gov. Andrew Cuomo after he was embroiled in a sexual harassment scandal. Adam Kuperstein talks with someone who's covered her for decades to get everything you need to know about New York's first female governor.

Hochul needs to quickly build her own team of advisers who can help steer the administration for at least the next 16 months. She announced senior appointments to her incoming administration on Monday, with Karen Persichilli Keogh as secretary to the governor and Elizabeth Fine as counsel to the governor.

She plans to keep on Cuomo-era employees for 45 days to allow her time to interview new hires but said she will not keep anyone found to have behaved unethically. At least 35 employees in the governor’s office have left since February, according to staff rosters.

Hochul, who said she didn’t work closely with Cuomo and wasn’t aware of the harassment allegations before they became public, has vowed no one will ever call her workplace “toxic.”

“I have a different approach to governing,” Hochul said Wednesday in Queens, adding, "I get the job done because I don’t have time for distractions, particularly coming into this position.”

Hochul, who once represented a conservative Western New York district in Congress for a year and has a reputation as a moderate, is expected to pick a left-leaning state lawmaker from New York City as her lieutenant governor.

“She’s very experienced and I think she’ll be a refreshing and exciting new governor,” he said.