Ukraine's president has become widely known for his brave, "heroic" actions amid the Russian invasion

When Volodymyr Zelenskyy was growing up in southeastern Ukraine, his Jewish family spoke Russian and his father once forbade the younger Zelenskyy from going abroad to study in Israel. Instead, Zelenskyy studied law at home. Upon graduation, he found a new home in movie acting and comedy — rocketing in the 2010s to become one of Ukraine’s top entertainers with the TV series “Servant of the People."

In it, he portrayed a lovable high school teacher fed up with corrupt politicians who accidentally becomes president.

Fast forward just a few years, and Zelenskyy is the president of Ukraine for real. At times in the runup to the Russian invasion, the comedian-turned-statesman had seemed inconsistent, berating the West for fearmongering one day, and for not doing enough the next. But his bravery and refusal to leave as rockets have rained down on the capital have also made him an unlikely hero to many around the world.

With courage, good humor and grace under fire that has rallied his people and impressed his Western counterparts, the compact, dark-haired, 44-year-old former actor has stayed even though he says he has a target on his back from the Russian invaders.

After an offer from the United States to transport him to safety, Zelenskyy shot back on Saturday: “I need ammunition, not a ride," he said in Ukrainian, according to a senior American intelligence official with direct knowledge of the conversation.

Russian forces on Saturday were encircling Kyiv in the third day of the war. The chief objective, say military observers, is to reach the capital to depose Zelenskyy and his government and install someone more compliant to Russian President Vladimir Putin.

The boldness of Zelenskyy's stand for Ukraine's sovereignty might not have been expected from a man whose biggest political liability for many years was the feeling that he was too apt to seek compromise with Moscow. He ran for office in part on a platform that he could negotiate peace with Russia, which had seized Crimea from Ukraine and propped up two pro-Russian separatist regions in 2014, leading to a frozen conflict that had killed an estimated 15,000.

Although Zelenskyy managed a prisoner exchange, the efforts for reconciliation faltered as Putin's insistence that Ukraine back away from the West became ever more intense, painting the Kyiv government as a nest of extremism run by Washington. 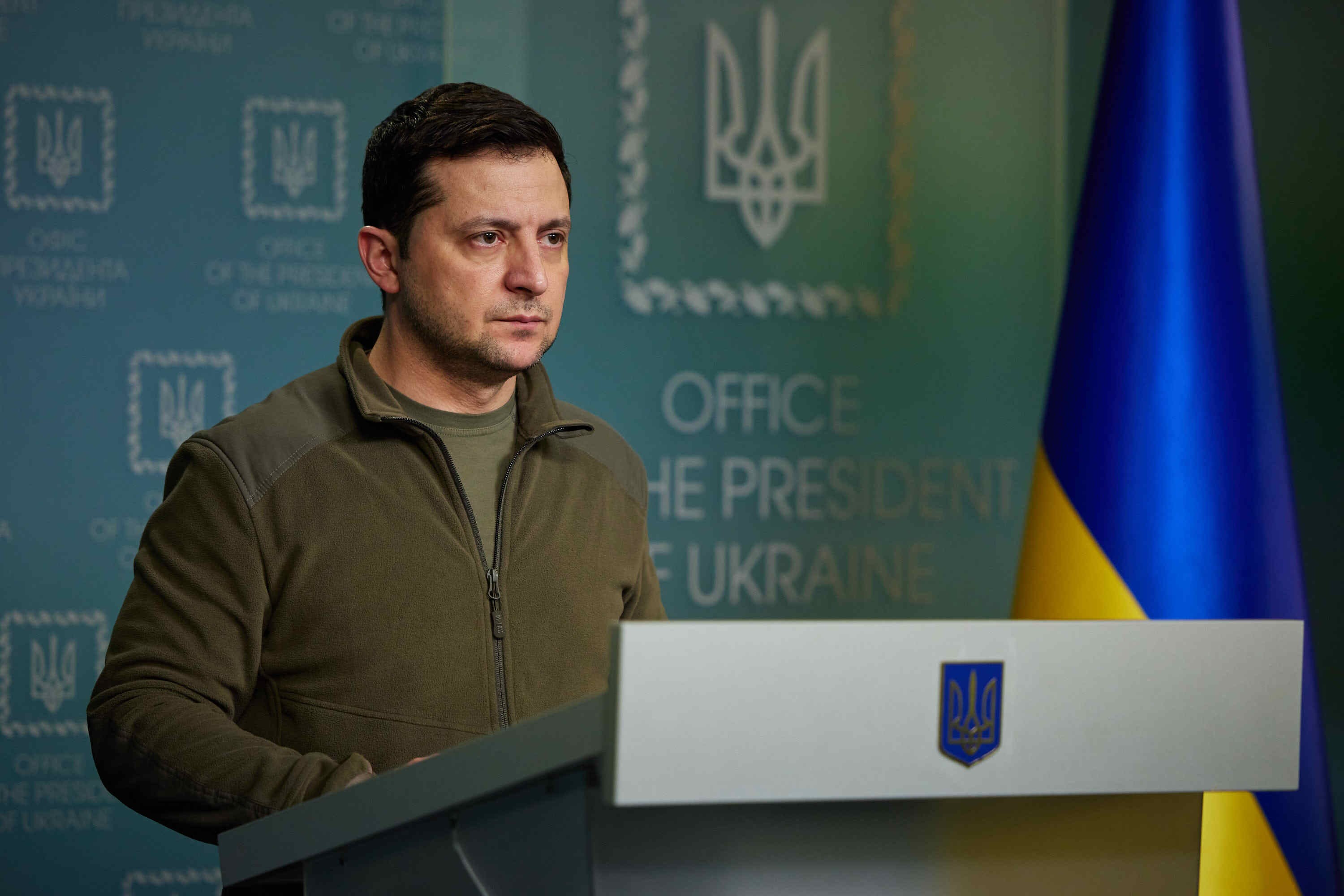 Zelenskyy has used his own history to demonstrate that his is a country of possibility, not the hate-filled polity of Putin's imagination.

In spite of Ukraine's dark history of antisemitism, reaching back centuries to Cossack pogroms and the collaboration of some anti-Soviet nationalists with Nazi genocide during World War II, Ukraine after Zelenskyy's election in 2019 became the only country outside of Israel with both a president and prime minister who were Jewish. (Zelenskyy's grandfather fought in the Soviet Army against the Nazis, while other family died in the Holocaust.)

Like his TV character, Zelenskyy came to office in a landslide democratic election, defeating a billionaire businessman. He promised to break the power of corrupt oligarchs who haphazardly controlled Ukraine since the dissolution of the Soviet Union.

That this fresh-faced upstart, campaigning primarily on social media, could come out of nowhere to claim the country's top office likely was disturbing to Putin, who has slowly tamed and corralled his own political opposition in Russia.

Putin's leading political rival, Alexei Navalny, also a comedic, anti-corruption crusader, was poisoned by Russian secret services in 2020 with a nerve agent applied to his underwear. He was fighting for his life when he was allowed under international diplomatic pressure to leave for Germany for medical treatment, and when doctors there saved him, he chose to go back to Russia despite certain risk.

Navalny, now in a Russian prison, has denounced Putin's military operation in Ukraine.

Both Zelenskyy and Navalny seem to share a perspective that they must face the consequences of their beliefs, no matter what.

“It’s a frightening experience when you come to visit the president of a neighboring country, your colleague, to support him in a difficult situation, (and) you hear from him that you may never meet him again because he is staying there and will defend his country to the last,” Polish President Andrzej Duda said Friday.

He spent time with Zelenskyy on Wednesday just before the fighting started, one of many political leaders who have met with the Ukrainian president over the past month, including U.S. Vice President Kamala Harris.

President of Ukraine Volodymyr Zelenskyy received a standing ovation at the Munich Security Conference Saturday before delivering a damning condemnation of Russian appeasement and imploring world leaders to interfere on Russian military escalation in Ukraine.

Zelenskyy first came to the attention of many Americans during the administration of President Donald Trump, who in a phone call with Zelenskyy in 2019 leaned on him to dig up dirt on then presidential candidate Biden and his son Hunter that could aid Trump's re-election campaign. That “perfect" phone call, as Trump later called it, resulted in Trump's impeachment by the House of Representatives on charges of using his office, and the threat of withholding $400 million in authorized military support for Ukraine, for personal political gain.

Zelenskyy refused to criticize Trump's call, saying he did not want to get involved in another country's politics.

Putin's attack, which the Russian president has termed a “special military operation," began early Thursday. Putin denied for months that he had any intent to invade, and accused Biden of stirring up war hysteria when Biden revealed the numbers of Russian troops and weapons that had been deployed along Ukraine's borders with Russia and Belarus — surrounding Ukraine on three sides.

Putin justified the attack by saying it was to defend two breakaway districts in eastern Ukraine from “genocide."

With Russian media presenting such a picture of his country, Zelenskyy recorded a message to Russians to refute the notion that Ukraine is the aggressor and that he is any kind of warmonger: “They told you I ordered an offensive on the Donbas, to shoot, to bomb, that there’s no question about it. But there are questions, and very simple ones. To shoot whom, to bomb what? Donetsk?"

Recounting his many visits and friends in the region — “I've seen the faces, the eyes" — he said, “It’s our land, it’s our history. What are we going to fight over, and with whom?”

Unshaven and in olive green khaki shirts, he has taped other messages to his compatriots on the internet in the last few days to bolster morale and to emphasize that he is going nowhere, but will stay to defend Ukraine. “We are here. Honor to Ukraine," he declares.

In the runup to the Russian invasion, Zelenskyy was critical of President Joe Biden’s open and detailed warnings about Putin’s intentions, saying they were premature and could cause panic. Then after the war began, he has criticized Washington for not doing more to protect Ukraine, including defending it militarily or accelerating its bid to join NATO.

Zelenskyy and his wife, Olena, an architect, have a 17-year-old daughter and 9-year-old son. He said this week that they remained in Ukraine, not joining the exodus of mainly women and children refugees seeking safety abroad.

"The war has transformed the former comedian from a provincial politician with delusions of grandeur into a bona fide statesman," wrote Melinda Haring of the Atlantic Council's Eurasia Center for Foreign Affairs on Friday.

Though he can be faulted for not carrying out political reforms quickly enough and for dragging his feet on hardening Ukraine's long border with Russia over the last year, Haring said, Zelenskyy “has shown a stiff upper lip. He has demonstrated enormous physical courage, refusing to sit in a bunker but instead traveling openly with soldiers, and an unwavering patriotism that few expected from a Russian speaker from eastern Ukraine."

“To his great credit, he has been unmovable."