The state of Connecticut on Thursday issued a statewide public health advisory because of the rise in COVID-19 cases and urging residents to limit non-essential trips outside the home between 10 p.m. and 5 a.m.

The health advisory applies to all residents except those who are essential workers who must leave their home to go to their jobs and anyone who has to leave their house on an emergency basis for medical care, medical supplies, food or groceries.

In addition, the state is asking residents to keep Thanksgiving celebrations to 10 people or less as the state rolls back to Phase 2.1 beginning at midnight.

"It's a tough pill to swallow, I get it," Gov. Ned Lamont said. "Do it now, do it this Thanksgiving, put up with it a little longer, we're going to be much better in a long-term."

The governor said he believes limiting the size of private, indoor gatherings will limit the spread of the disease and also make tracking and tracing easier.

The models continue to show a rise in the coronavirus into early next year and that it's likely the state will see more cases cases during the winter putting in question gathering sizes for Christmas too, state officials said.

"This has been nationally a source of spread of COVID-19 and as we see our level of community transmission continue to increase in Connecticut, that just means the odds that someone you have over to your home, unfortunately, is even that much more likely to have an asymptomatic or mildly symptomatic case of COVID," said Deirdre Gifford, acting commissioner of the Department of Public Health. "We tend to let down our guard a little bit in terms of masks and distancing inside our homes so for all of those reasons, it makes a lot of sense."

Gifford said she understands how limiting the size of holiday gatherings can be painful.

Meanwhile, Connecticut's COVID-19 test positivity fell bellow 4% to 3.7% on Thursday while hospitalizations and the number of deaths continued to climb, according to the state's latest data.

Health care open enrollment is kicking off amid a global pandemic, soaring unemployment and uncertainty around the future of the Affordable Care Act. Health care strategist Jason Resendez of Consumers for Quality Care explains what to keep in mind when you’re selecting a new plan.

68 towns in Connecticut are now considered "Red Alert" towns, up from 30 the previous week, Gov. Ned Lamont announced Thursday. The governor said those towns account for about 60% of the population of the state.

The state has started a color-coded alert system that places each city and town in a category based on its COVID-19 rate.

Red is the highest alert level and municipalities in that category have the option to roll back to a more restrictive phase two of reopening rather than remain in phase three, which the state is in now.

"This is a map that suggests that why we have moved to statewide protocols -- no more trying to just put on the fire in a local municipality," Lamont said.

*Newly added to the red-level alert list this week

The towns of Canterbury, Cromwell, Lisbon, and Old Saybrook were in the red zone last week and have been downgraded to the orange zone this week.

Editor's Note: The governor originally said there were 42 Red Alert towns during a press conference on Thursday afternoon. His office later corrected that number to 68.

‘Put Some Respect on Her Name': Army Vet and Comedian Rita Brent Performs Her Viral Rap About Kamala Harris 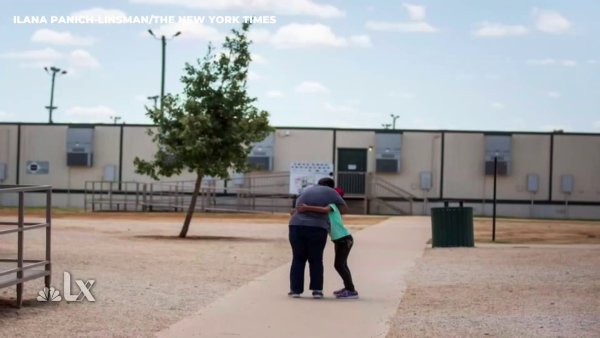 The Parents of 666 Migrant Children Separated at the Border Are Still Missing: An ACLU Lawyer Describes the Lasting Trauma

The state on Thursday also rolled out a number of new restrictions on some sports:

The state looked to enact these regulations in collaboration with Massachusetts and Rhode Island, the governor said.

"We got to stay closer to home so we're not going allow that," the governor said about out-of-state competitions.

The governor said the restrictions would also put a stop to any independent 11 on 11 football leagues. He also said state and local health officials will ask for help with contact tracking and all sports teams should be prepared to support their efforts.

The state is set to roll back some COVID-19 reopening options on Friday morning at midnight, moving to what the governor is calling Phase 2.1.

It includes a reduction in indoor capacity for restaurants and event venues, and a 9:30 p.m. curfew for dine-in service. The governor was careful to say that they do not believe restaurants following the COVID-19 guidelines are the direct cause of any outbreaks, but with concerns about community spread, they believe the move is necessary to protect public health.

Lamont is also recommending Connecticut residents stay home from 10 p.m. to 5 a.m. He said at this point, he is not considering making this curfew a requirement, just a "strong recommendation."

Performing arts and movie theaters will have capacity capped at 100 people.

Personal services such as hair salons, nail salons and barbershops can remain at 75% capacity.

"They've made enormous efforts there. People are wearing the masks, they've got the plexiglass, they've been able to maintain the distancing, and I think that has not been a source of spread," Lamont said Monday about personal services.