US Journalist Jailed for Months in Myanmar Lands in New York

American journalist Danny Fenster, who was freed after nearly six months in jail in military-ruled Myanmar, arrived Tuesday in the United States for an emotional reunion with his family.

Fenster, who was sentenced last week to 11 years of hard labor, was handed over Monday to former U.S. diplomat Bill Richardson, who helped negotiate the release. He is one of more than 100 journalists, media officials or publishers who have been detained since the military ousted the elected government of Nobel laureate Aung San Suu Kyi in February.

It's been a “long time coming, a moment I had been imagining so intensely for so long," a bearded and shaggy-haired Fenster said after landing in New York. "Surpasses everything I had imagined.”

Fenster’s family awaited his arrival in the lobby of an airport hotel — and rushed outside to greet him as the SUV carrying him approached. His mother, Rose, embraced him in a long tight hug the moment he stepped out of the vehicle.

“It’s over. There’s nothing to be anxious about anymore,” Fenster said later in an interview. “Any bitter, ill will, regret, anger spilled out on the tarmac when I got on that plane.” 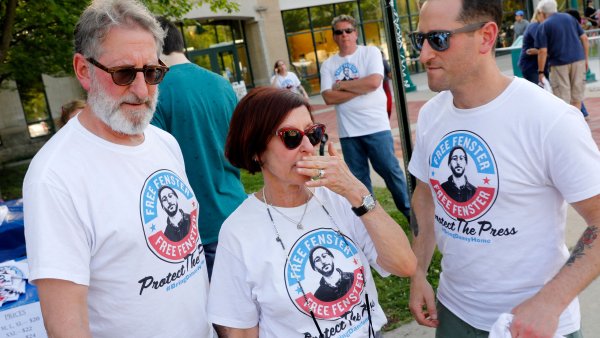 Myanmar Court Sentences US Journalist to 11 Years in Jail 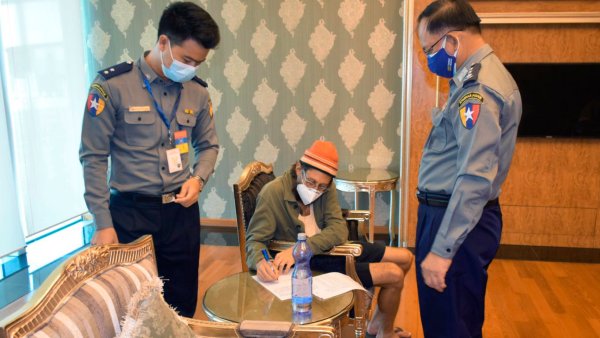 US Journalist Jailed in Myanmar for Nearly 6 Months Is Freed

His wife, Julianna, who is still in Myanmar, is set to reunite with him in Detroit.

Late Monday, as Fenster, 37, transited through Qatar, he told reporters that he was physically OK and had not been starved or beaten while in custody. While jailed, he had told his lawyer that he believed he had COVID-19, although prison authorities denied that.

Fenster, the managing editor of online magazine Frontier Myanmar, was convicted Friday of spreading false or inflammatory information, contacting illegal organizations and violating visa regulations. Days before his conviction, he learned he had been charged with additional violations that put him at risk of a life sentence.

It “feels great to get Danny back home. It’s worth the effort, worth everything we did,” said Richardson, a former governor of New Mexico and past ambassador to the United Nations who helped negotiate the release through his foundation.

Fenster's mother described the ordeal as a “nightmare” and the family expressed relief that it was over.

Fenster — in a knit hat that he said was a gift from another prisoner — joked that the first thing he would do is get a shave and a haircut.

He also said he hoped his plight would help focus world attention on the suffering of the people of Myanmar, where the army has responded brutally to peaceful protests that opposed the generals' seizure of power. Security forces have killed more than 1,200 civilians and arrested about 10,000 others, according to the Assistance Association for Political Prisoners. The takeover and the ensuing crackdown have drawn condemnation and sanctions from the United States and others.

Richardson is known for negotiating the freedom of Americans detained in countries with which Washington has poor relations and when he visited Myanmar earlier this month, it raised hopes that he might win Fenster's release. But after that trip, he said his focus was on helping the Southeast Asian country manage the COVID-19 pandemic and speeding up the delivery of vaccines there — and no mention of Fenster was made in his foundation's summary of the visit.

In an interview with The Associated Press on Tuesday, Richardson said U.S. officials told him not to bring up Fenster’s case during his first meeting with military leaders. But he did so when he sensed there was an opportunity to negotiate the release during a private conversation with the commander-in-chief of the junta.

“Well, I raised it. I said, ’You should release him,” Richardson explained, at which point talks deepened and he was told to return Monday for “a final negotiation.”

Later that day, according to Richardson's timeline, Fenster was free.

Richardson said he made no promises in exchange for Fenster’s freedom. “And they didn’t ask me for anything,” he said.

“I saw we had progress on the humanitarian issue, and I zeroed in on Danny and Aye Moe,” Richardson said, referring to a former worker at his foundation who was also detained then released.

Fenster had been in detention since hisarrest at Yangon International Airport on May 24.

The exact allegations against him were never clear, but much of the prosecution's case appeared to hinge on proving that he was employed by another online news site that was ordered closed this year during the crackdown on the media that followed the military takeover. Fenster used to work for the site but left that job last year.

A native of the Detroit area, Fenster has a master’s degree in creative writing from Wayne State University and worked for a newspaper in Louisiana before moving to Southeast Asia, according to Deadline Detroit, a news website to which he occasionally contributed.

His older brother, Bryan, said he was particularly interested in the plight of people from the Muslim Rohingya minority, hundreds of thousands of whom fled Myanmar during a brutal counterinsurgency campaign by the army in 2017.

The generals in Myanmar “were convinced that it wasn’t worth it to hang on to Danny,” U.S. Rep. Andy Levin of Michigan, who represents the Fenster family in Congress, told Detroit radio station WWJ. “If they kept him and anything really happened to him, we would never forget it. We would never forgive them.”