Several experts have raised concerns that the bans violate the U.S. Constitution's protections of free speech

U.S. court officials in Oregon are reviewing bans on future protesting that were placed on some people arrested during protests in Portland after some raised concerns that the prohibitions violated the First Amendment.

“We're reviewing every case again right now and looking at the wording of some of the conditions,” Brian Crist, chief pretrial services officer for the U.S. District Court in Portland, said Wednesday. “A lot of this I think will be resolved.”

Crist said he couldn't comment on individual cases, but he noted the court looks at each defendant individually and doesn't have “blanket conditions” that are placed on everyone.

Portland has seen nightly protests for more than two months since the police killing of George Floyd in Minneapolis. The unrest intensified after federal agents were dispatched to protect a downtown U.S. courthouse.

The protest bans, first reported by ProPublica, were imposed in at least a dozen cases — most of them involving misdemeanor charges of failing to obey a lawful order. Defendants had to agree to the prohibitions in order to be released from jail while they await trial.

Some of the protest bans were hand-written in the court documents, others were typed out: “Defendant may not attend any other protests, rallies, assemblies or public gatherings in the state of Oregon,” many of the release documents read.

Several experts have raised concerns that the bans violate the U.S. Constitution's protections of free speech.

“I can't believe that they think this is constitutional,” said Aaron Caplan, a professor at Loyola Law School in Los Angeles. “It's really broad and it's hitting at something that is constitutionally protected.”

In at least some of the cases, the protest bans were added by U.S. Magistrate Judge John Acosta. He didn't immediately respond to a request for comment.

“We have only sought geographic (five blocks from the Hatfield Courthouse) and curfew restrictions. The additional restrictions were added by the court,” Sonoff wrote in an email to The Associated Press.

Noelle Mandolfo, a 30-year-old wellness coach and yoga instructor, was among those banned from protests while awaiting trial. She was charged with misdemeanor assault on a federal officer early Monday after joining the Portland protests on her way to her father's home in California.

Video of her saying “I can’t breathe” as federal officers in tactical gear held her down amid clouds of gas circulated widely online. Mandolfo said an agent claimed she'd aimed a laser pointer at officers, but she said she didn't have a laser pointer and never used one during the protest.

Journalist Tuck Woodstock has been on the ground in Portland covering protests in the city, and putting their own safety in danger to do so. Woodstock joined LX News to talk about the importance of independent and volunteer journalists to tell this story, and what they are seeing on the streets.

Mandolfo said she waited nearly 16 hours for a court hearing. Desperate to get out of jail and get medical attention, Mandolfo didn’t hesitate to agree to the conditions.

“I was agreeing to anything that they wanted from me,” she said. “I just really wanted to get away from the whole situation.”

Mandolfo hasn’t yet discussed the conditions of her release with her public defender, who is busy with many other protest cases.

“I feel it’s against my constitutional rights. Of course it is,” Mandolfo said. “But I understand that, to save time, if they really are trying to pose me as a threat, why they can request that from me. And if I have to prove I’m not a threat by not attending, I’m definitely willing to do that, because I’m not a threat. I never was a threat.”

Federal Defender Lisa Hay said her office is working to get the conditions modified in some of the cases.

“We think that kind of condition is overbroad and unconstitutional,” she said. “We understand the court was weighing specific concerns of different defendants who wanted to be able to work and not have a curfew, and so the court made that condition an alternative.”

The federal officers sent into Portland, Oregon, by the Trump Administration to crack down on protests have been behaving in unpredictable ways that have caused confusion and fear in the city, said Celina Tebor, a reporter from the Oregonian. But she said the protests seem to have been only reinvigorated by their presence.

Typically pretrial release conditions are narrowly targeted to the crime, Caplan said. For instance, if someone is accused of assault, they may be banned from having any contact with the victim in the case or going near their home.

But protests, rallies and other forms of political speech are protected by the First Amendment, Caplan said, and not necessarily connected to the crime of failing to obey a lawful order.

“You just can't go to any protests anywhere? Well that's ridiculous,” he said. “It's no longer related to the crime that you were charged with, it's not connected to any particular victim. It's just taking away your right to freedom of speech.”

There’s plenty of case law on the subject, Caplan said. In the 1970s, Russell Means, an Oglala Lakota activist for the rights of Native Americans, was ordered by a North Dakota state judge to refrain from political activities on behalf of the American Indian Movement as a condition of bail. The prohibition was later overturned by a federal judge who said forcing Means to give up his First Amendment rights was a violation of due process.

The wording of the ban in Portland — especially “public gatherings” — is so broad that it could apply to a baseball game or a church service, Caplan said.

“Whoa — this person was accused of disobeying an order to disperse and now they can’t go worship? That’s a problem,” Caplan said. “Ideally the conditions of bail need to be spelled out so they are specific and something everyone can agree on.” 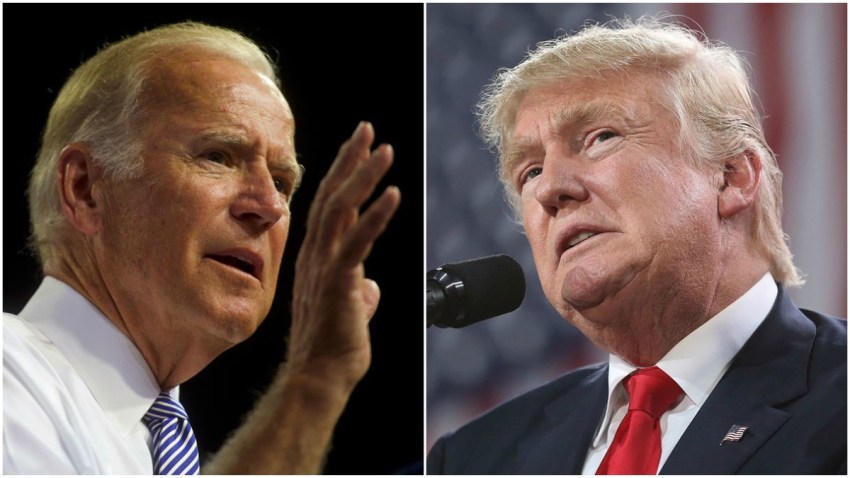 As Crime Surges on His Watch, Trump Warns of Biden's America 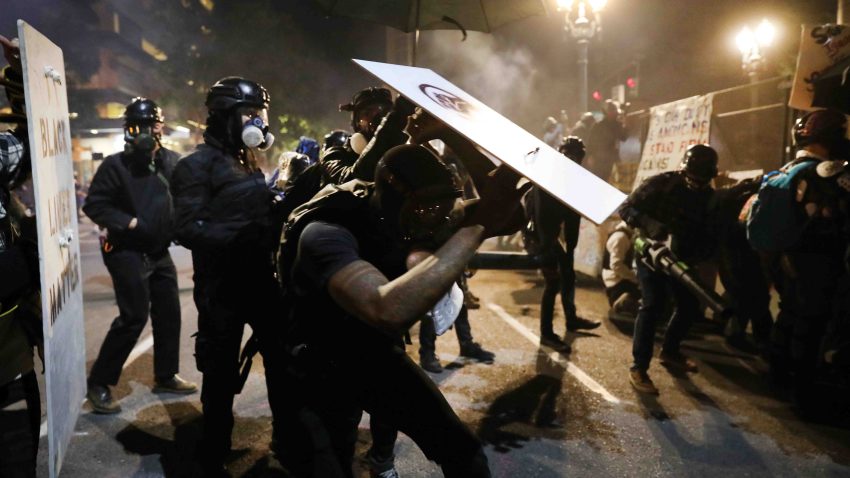 More narrowly tailored geographical restrictions aren’t uncommon in protest-related cases. In Denver, some arrested protesters were released during the days of larger protests in May with the condition that they stay away from a big swath of downtown beyond the area near the state Capitol that was the main focus of demonstrators.

The city attorney’s office asked for the restriction for most protesters but a judge only granted them for those with a criminal history or who were accused of acting violently during the protest, not those who simply violated the curfew in place at the time.

Public defenders objected to the restrictions, pointing out that they would criminalize things like simply passing through the area on a bus, but there were no constitutional arguments raised against it.