The following is some of what we know so far about the lives and the loved ones of the eight victims killed in the Atlanta-area spa shootings. This article will be updated as more information is released:

Sunday should have seen 63-year-old Yong Ae Yue buying groceries and cooking Korean food for her family. Instead those relatives are mourning her death Tuesday at the Aromatherapy Spa in Atlanta.

"We are devastated by the loss of our beloved mother, and words cannot adequately describe our grief,” her sons said in a statement released by attorney BJay Pak.

Yue immigrated from South Korea to the United States, and was married for a time to Mac Peterson of Columbus, who once served at the Army's Fort Benning in that Georgia city.

“Mom was an amazing woman who loved to introduce our family and friends to her home-cooked Korean food and Korean karaoke,” said Rob Peterson, one of Yue’s sons, who described her as an “amazing woman” in a fundraising appeal. “Will miss joining mom on her weekly Sunday routine to the grocery store and traditional Korean dinner. She was always kind-hearted and willing to help everyone she encountered.”

Yue was a licensed massage therapist in Georgia who owned a home in the suburb of Peachtree Corners. Relatives reached there declined comment. 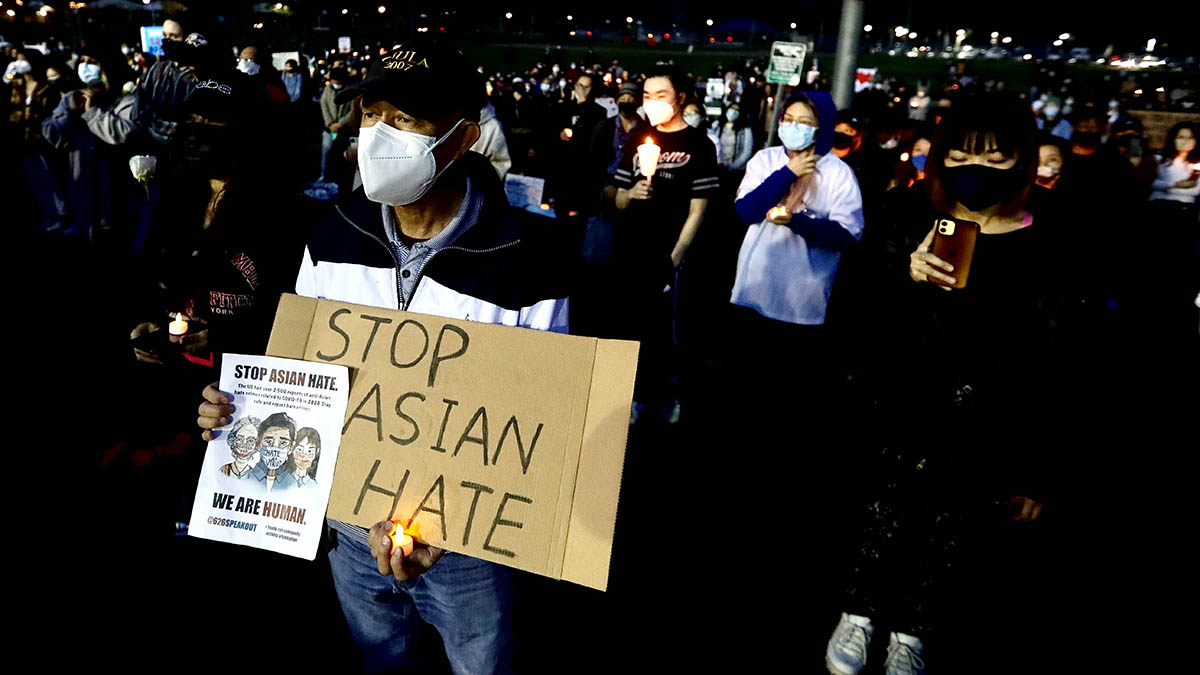 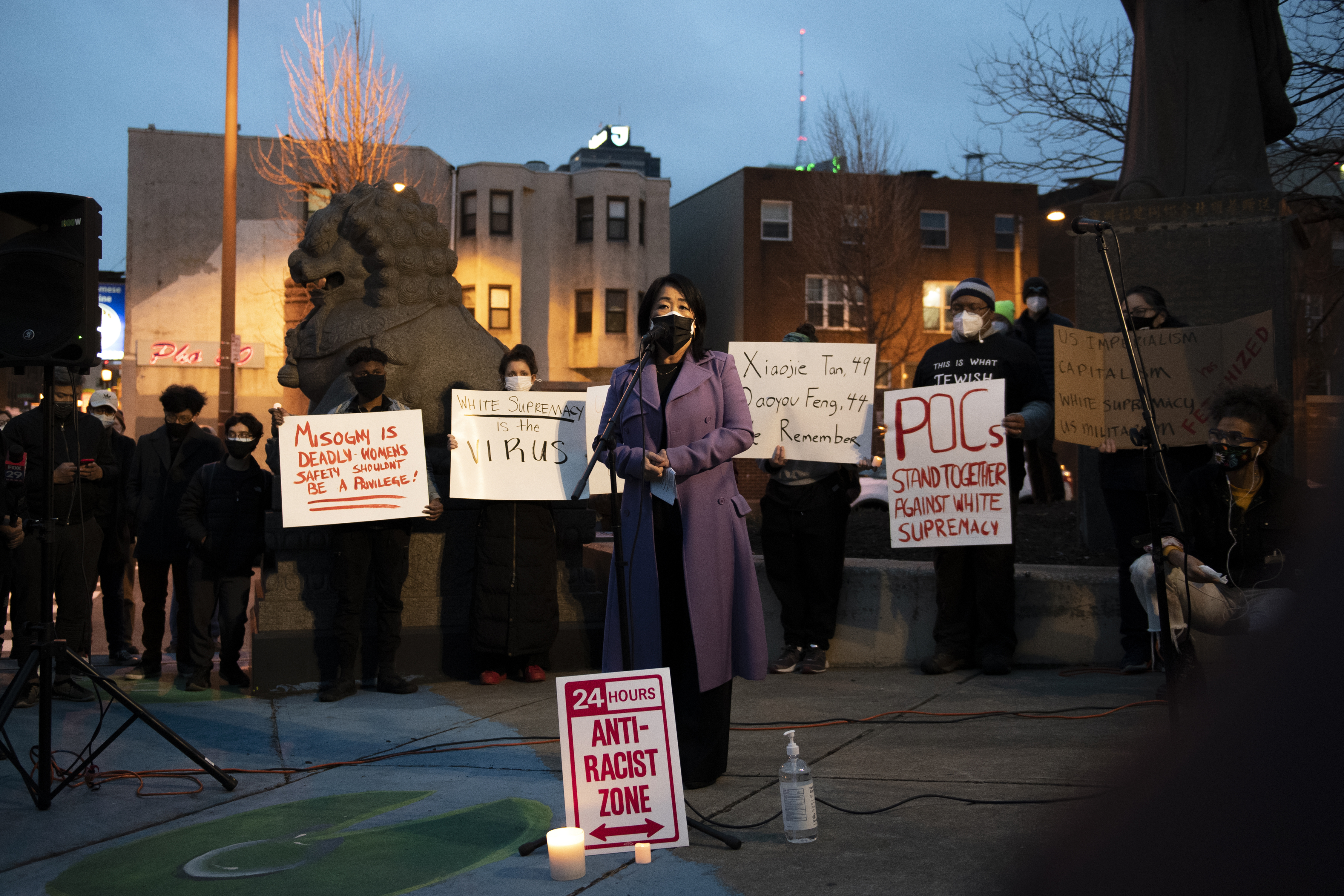 A granddaughter lauds Suncha Kim's love and mourns that she won't be able to “watch her children and grandchildren live the life she never got to live.”

The 69-year-old Kim was one of three women killed at the Gold Spa in Atlanta.

Regina Song wrote that her grandmother was born in Seoul and came to the United States speaking little English, working multiple jobs to provide for her husband, son and daughter.

“This took immense courage and my grandmother was a fighter,” Song wrote.

Family members told The Washington Post that Kim was a Catholic and naturalized American citizen who volunteered her time and helped raised money for various causes. Relatives said Kim won the President’s Volunteer Service Award for her efforts to help feed the homeless in the Washington, D.C., area.

"She was pure hearted and the most selfless woman I knew," her granddaughter wrote. “She represented everything I wanted to be as a woman, without an ounce of hate or bitterness in her heart.”

"She never forgot to call me once a week to say ‘Stay strong in life... when you’re happy, I’m happy.’”

The activist group “Running to Protest” brought New Yorkers together to rally and run a 5K in solidarity with Black and Asian Americans.

Soon Chung Park had spent much of her life in New York and northern New Jersey before moving to Atlanta, son-in-law Scott Lee told The New York Times and The Washington Post.

In Atlanta, the 74-year-old Park settled in a corridor that included Korean businesses in the Gwinnett County suburb of Duluth. Though she had family members in the New York area, she made a new life here, with 38-year-old Gwangho Lee telling The Daily Beast that he accepted Park's marriage proposal after the two met in 2017.

Park was the day manager at the Gold Spa, cooking for employees. Lee, a ride-hailing service driver, told The Daily Beast he was already on the way to Gold Spa when he got texts about an apparent robbery, and tried to resuscitate Park while a police officer stood by after he arrived.

She was described as unusually youthful-looking for her age, fit and active, a former dancer and hard a worker,

“She just liked to work,” Scott Lee told The New York Times. "It wasn’t for the money. She just wanted a little bit of work for her life.”

Hyun Jung Grant, 51, loved disco and club music, often strutting or moonwalking while doing household chores and jamming with her sons to tunes blasting in the car.

“I learned how to moonwalk because, like, I saw her moonwalking while vacuuming when I was a kid,” Park said.

On Tuesday night, Park was at home playing video games when he heard a gunman had opened fire at the Gold Spa where his mother worked. He rushed to the scene and then to a police station to find out more information. But it was through word of mouth that he learned his mother was dead.

Her job was a sensitive subject, Park said, noting the stigma often associated with spa businesses. She told her sons that they should tell others she worked doing makeup with her friends.

Ultimately, Park said, he didn’t care what she did for work.

“She loved me and my brother enough to work for us, to dedicate her whole life,” he said. “That’s enough.”

An entrepreneur who built multiple businesses after arriving in the United States knowing little about the country, Xiaojie “Emily” Tan is remembered for being devoted to her work and her family.

The 49-year-old owned Young's Asian Massage near Woodstock, where she was shot dead two days short of her 50th birthday. She leaves a daughter who is a recent University of Georgia graduate, Jami Webb. Tan had been married twice, first to Michael Webb, who she met in her native city of Nanning, according to USA Today. Later, she married Jason Wang. She also owned Wang's Feet and Body Massage in Kennesaw when she died.

“She worked a lot, and she was the kind of lady that she wanted to depend on herself,” Wang told The Washington Post. Tan had earlier worked in and owned a nail salon.

Tan frequently visited her mother and other relatives in China.

“She’d always say, ‘we family,’” Michael Webb told USA Today. “Even when we got divorced, she’d say that: ‘We family.’ Because that’s how she was.”

Paul Andre Michels, 54, owned a business installing security systems, a trade he learned after moving to the Atlanta area more than 25 years ago.

He’d been talking about switching to a new line of work, but never got the chance. He was fatally shot at Young's Asian Massage on Tuesday along with three others.

“From what I understand, he was at the spa that day doing some work for them,” said Michels’ younger brother, John Michels of Commerce, Michigan.

Paul Michels also might have been talking with the spa’s owner about how the business operates, his brother said, because he had been thinking about opening a spa himself.

“His age caught up to him. You get to a point where you get tired of climbing up and down ladders,” John Michels said. “He was actually looking to start his own massage spa. That’s what he was talking about last year.”

Paul Michels grew up in Detroit in a large family where he was the seventh of nine children. His brother John was No. 8.

Though they were born 2 1/2 years apart, “he was basically my twin,” John Michels said. Both enlisted in the Army after high school, with Paul joining the infantry.

A few years after leaving the military, Paul followed his brother to the Atlanta area in 1995 for a job installing phones and security systems. He also met his wife, Bonnie, and they were married more than 20 years.

“He was a good, hard-working man who would do what he could do to help people,” John Michels said. “He’d loan you money if you needed it sometimes. You never went away from his place hungry.”

The day before she was killed, Delaina Ashley Yaun dropped by Rita Barron's boutique to say hello and show photos of her 8-month-old daughter.

"She told me, 'I’m happy. I want another baby,'” said Barron, who had gotten to know the 33-year-old Yaun from eating at the Waffle House where the new mother worked.

Yaun and her new husband, Mario Gonzalez, returned Tuesday to the shopping center where Gabby's Boutique is located, only this time they headed next door to Young's Asian Massage. They had planned it as a day for Yaun to relax while a relative watched their baby girl.

Barron and her husband, Alejandro Acosta, heard gunshots from inside the boutique and later noticed that a bullet had gone through the wall. She called 911, and after police arrived Acosta watched them bring people out of the business, some bleeding and wounded. Among those who walked out was Yaun's husband, unhurt but distraught. His wife had been killed. "As you can imagine, he’s totally destroyed, without strength, doesn’t want to talk with anybody,” said Acosta, who added that he had spoken twice with Yaun's husband since the shootings.

Family members said Yaun and her husband were first-time customers at Young's, eager for a chance to unwind.

“They’re innocent. They did nothing wrong,” Yaun’s weeping mother, Margaret Rushing, told WAGA-TV. “I just don’t understand why he took my daughter.”

Information on Daoyou Feng will be added once it becomes available.