Three Arrested for Trying to Drive Black Family out of Compton

Three Latino males are alleged to have tried to drive out a black family in Compton, sheriff's officials said

Two men and a teenage boy were arrested in connection with a series of race-based attacks on an African American family in an attempt to drive them out of Compton, in Los Angeles County, sheriff’s officials said.

A group of Latino males who claimed to be in a local street gang used metal pipes and shouted racial epithets at a black man who had recently moved into the neighborhood, sheriff’s officials said.

One of the suspects, identified as Efren Marquez, 21, allegedly pointed a gun at the victim and threatened to shoot him while he was being beaten with a metal pipe allegedly by a second suspect, identified as Jeffrey Aguilar, 19, officials said.

After the attack, the group left in a black sport utility vehicle. 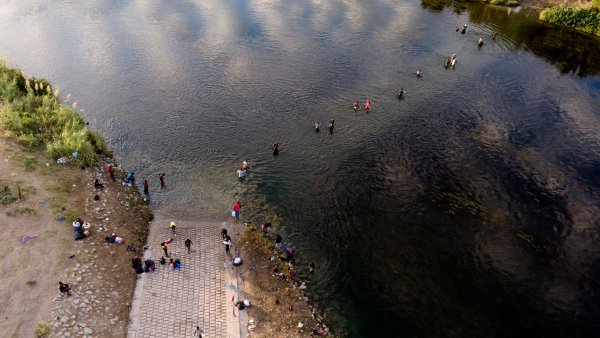 Many Migrants Staying in US Even as Expulsion Flights Rise

Marquez and Aguilar returned 30 minutes later with a group of up to 20 gang members, who surrounded the front of the victims’ home shouting racial epithets and telling them that members of the African American race (using the ‘n-word’) were not allowed to live in the neighborhood, sheriff’s officials said.

An unidentified member of the group threw a beer bottle through the front living room window.

Sheriff’s officials said the suspects continued to drive by the home of the family -- which includes four children -- several times a day, shouting racial epithets while ordering the family to leave the neighborhood.