‘Why Are You Silent?' Gabby Petito Stepdad Searches in Wyoming as FBI Looks to Trace Fiancé's Steps Home

"It’s absolutely absurd. You refer to her as the love of your life, everything seemed to be happy," Petito's stepfather, Jim Schmidt, said. "Why, why are you silent?"

The parents of Gabby Petito had their first inkling something may be off after receiving a text message from her in late August, the last communication they have had with her — or at least her phone.

According to an attorney for the Petito family, the 22-year-old said in a text to her mother "no service in Yosemite." That raised eyebrows because the last time they spoke to her, Gabby and her fiancé Brian Laundrie were on their way to Yellowstone National Park in Wyoming — some 800 miles from the California park mentioned in the text.

Gabby's mother, Nicole Schmidt, received that text on Aug. 30, and she still doesn't know for sure who text it. But now her husband, Jim Schmidt, is helping lead the search in Wyoming for the missing Long Island woman, who disappeared during a cross-country road trip with Laundrie.

Schmidt said that he saw the young couple before they started making their way west for their months-long van trip, as they left from the Long Island town of Blue Point. He said they looked "excited" for the journey.

"They were getting the van ready, and they just seemed like they couldn’t wait to go," Schmidt said Thursday, as he hung up posters throughout the area around Jackson Hole, near Wyoming's Grand Teton National Park. It was at some point during the couple's travels through that area when Petito vanished, her family believes.

"We’re just asking that anybody who has been to this area, visited, taken pictures, videos, whatever it may be — to go back and look at those and take a look, see if there’s anything that may be in there that could help us, help the police do what they have to do to find Gabby," Schmidt pleaded.

He and other officials can't even begin to narrow down their search area for Petito, because Laundrie and his family won't speak with police. Laundrie's attorney, Steven Bertolino, said the Laundrie family is hoping for Petito's safe return, but he's asked them not to talk to investigators.

Earlier in the week, police labeled Laundrie a person of interest in the case, a label that Bertolino shook off as nothing more than procedure.

It's the silence from Brian and the Laundrie family that Schmidt said he cannot comprehend.

"It’s absolutely absurd. You refer to her as the love of your life, everything seemed to be happy," he said. "Why, why are you silent?"

Petito's family reported her missing on Saturday but they hadn't heard from her in three weeks, officials have said. The converted camper Petito and Laundrie had been traveling in returned to Florida, Laundrie apparently with it, two weeks ago. But Petito was not with him, police said. Forensic analysis of the van as well as phone data is ongoing.

As investigators in North Port, Florida, where Petito lived with Laundrie and his parents, continue to struggle getting any information from the family, more law enforcement agencies are now involved in the case. In addition to the ground search in Wyoming and around the national park, there is also a nationwide search the includes police departments and the FBI. Law enforcement is trying to track and trace Laundrie's every move he made from Wyoming back to the home in Florida.

The young woman's father, Joe Petito, also pleaded for help at a police briefing on Thursday.

"What I need from everyone here is help. The goal is still not met, which is to bring Gabby home safely," Joe Petito said -- and urged anyone with information to call the FBI's tip line at 1-800-CALL-FBI. "Whatever you can do to make sure she comes home, I'm asking for that help. There's nothing else that matters to me now."

The couple had been seen arguing in southern Utah just before they traveled to Wyoming -- a dispute that prompted at least one 911 call from a witness, not Petito or Laundrie.

That body camera video clearly shows Petito in a state of distress as she stands on the side of the road in tears. She is heard saying she had been telling Laundrie she was sorry "for being so mean ... sometimes I have OCD, sometimes I get frustrated."

Investigators who responded to that Aug. 12 call described the situation as more of a mental health crisis. Cops said in a police report no significant injuries were observed. They pulled the van over near the entrance to Arches National Park, after it was seen speeding and hit a curb.

Police in North Port, Florida, announced that the fiancé of a Long Island woman who went missing while traveling through Wyoming is a person of interest in this case -- raising suspicion after it became known that he was in Florida 10 days prior to her being reported missing and due to the fact that he refuses to speak to authorities. Pei-Sze Cheng reports.

The body camera video shows Petito visibly upset when an officer approached them.

“We’ve just been fighting this morning. Some personal issues,” she tells him, adding that she suffers from obsessive-compulsive disorder that affects her behavior.

“Some days, I have really bad OCD, and I was just cleaning and straightening up and I was apologizing to him saying that I’m so mean because sometimes I have OCD and get frustrated,” she said.

Laundrie says on the video the couple got into a minor scuffle that began when he climbed into the van with dirty feet, and said he didn't want to pursue a domestic violence charge against Petito, who officers decided was the aggressor.

“I’m not going to pursue anything because she is my fiancée and I love her. It was just a squabble. Sorry it had to get so public,” Laundrie says. He told the responding officer that emotional tension had been building between him and Petito and that they were arguing more frequently because they had been traveling together for four to five months, the report said.

Ultimately Moab police decided not file any charges and instead separated the couple for the night, with Laundrie checking into a motel and Petito remaining with the converted sleeper van.

Police officials said Thursday the body camera video shows there was a disturbance but at this point, police don't know if it had anything to do with Petito's disappearance. North Port police had no history of interactions with the couple before they went on the trip, nor were they aware of any prior mental health issues.

Authorities identified Laundrie as a person of interest in the case Wednesday and appealed on social media to the family attorney for help arranging an interview as they seek to find answers for Petito's family.

North Port Police Chief Todd Garrison vented to reporters on Thursday, "We share the frustration with the world right now. Two people went on a trip and one person returned and that person isn't providing us any information."

Investigators have released very few details so far to protect the integrity of the investigation. What's clear is that Laundrie was in Florida 10 days prior to Petito being reported missing and just before the couple traveled to Wyoming, they were seen arguing in southern Utah. 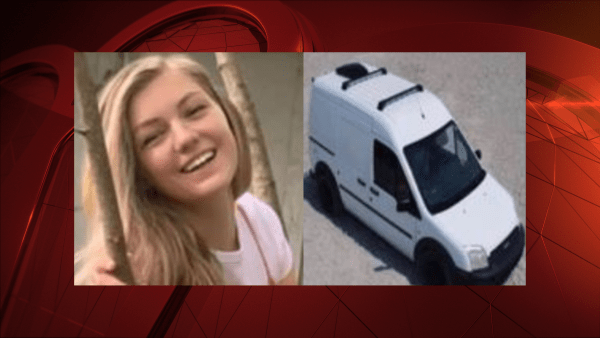 Authorities are also looking for any possible connection between Petito's disappearance and the still-unsolved slaying of two women who were fatally shot at a campsite near Moab.

Their bodies were found Aug. 18, six days after the incident between Laundrie and Petito. The two women, Kylen Schulte, 24, and Crystal Turner, 38, had told friends they feared a “creepy man” they had seen nearby might harm them.

“They're looking into that potential connection,” said Joshua Taylor, public information officer for North Port police. “I have not heard of any information that links these two cases together. I understand the timing is suspicious. You never know. I'm not going to say we've ruled it out.”

The family of Gabby Petito, who reported her missing last week, issued a statement to the parents of Brian Laundrie, Gabby’s fiancé, who is a person of interest in the disappearance.

Laundrie's family attorney has released a statement saying the family declined comment apart from saying it hopes Petito gets home safely. In another emailed statement Wednesday, Bertolino said that Laundrie's family “is remaining in the background" as the search continues.

“In my experience, intimate partners are often the first person law enforcement focuses their attention on in cases like this and the warning that ‘any statement made will be used against you’ is true, regardless of whether my client had anything to do with Ms. Petito’s disappearance. As such, on the advice of counsel Mr. Laundrie is not speaking on this matter,” Bertolino said.

But police want to hear from Laundrie specifically.

"We don't know what Brian knows. That's the bottom line and we were hopeful to talk to him. He needs to talk to us," said Taylor. "We need to know exactly where he was, where she was, their last location."

Petito and Laundrie were childhood sweethearts in Suffolk County but moved from Blue Point, New York, in 2019 to live with his parents in North Port, which is about 34 miles south of Sarasota. They set out on their journey in July from New York, saying on social media accounts they intended to reach Oregon by Halloween.

Family and friends are pleading for help finding a 22-year-old woman from Long Island who went missing while traveling through Wyoming on a "van life journey" with her boyfriend, according to investigators looking into her disappearance. Pei-Sze Cheng reports.