Two men were indicted Wednesday for making a terroristic threat for their alleged roles in an hour-long bomb scare near a Queens mall that resulted in evacuations and ended up being a hoax, the Queens district attorney said.

Louis Shenker and Taylor Lyne both face felony charges for the incident on Jan. 4.

According to the charges, a security guard at the Queens Place Mall in Elmhurst spotted Shenker and Lyne shortly before 5 a.m. standing next to a black Tesla with a Nevada loaner license plate. The car was left parked on a spiral ramp between garage levels. The hood, trunk and doors of the vehicle were all open, Queens District Attorney Melinda Katz said, and the pair were said to have connected an electric bike to the car.

About two hours later, another mall employee saw the car was covered in blankets and cardboard boxes, along with a Black Lives Matter sign. There was also a device with wires coming out of it, and had a similar makeup to a bomb that could go off at any time, Katz said. 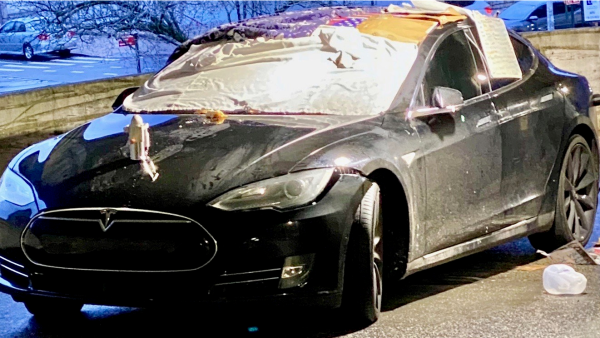 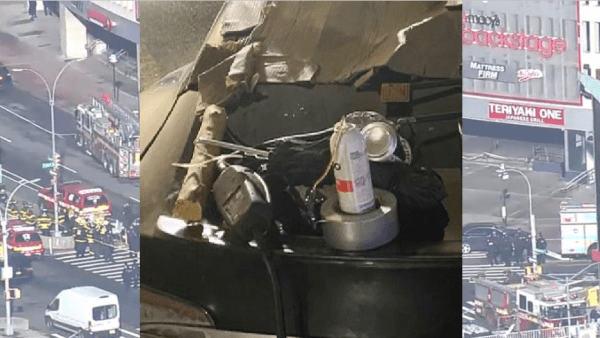 The shopping center was forced to evacuate, businesses had to close and the busy Queens Boulevard had to be shut down to drivers and pedestrians, according to the DA. Police soon determined that the device was not an explosive, but rather a hoax.

Shenker, 22, had turned himself in to police hours after the stunt; Lyne, 27, was arrested and arraigned on Feb. 1.

"There is nothing amusing about a bomb hoax, and the defendants now face very serious charges. Planting a fake explosive in a shopping center creates chaos and fear."

Shenker, of Amherst, Massachusetts, and Lyne, of Santa Rose, California, both face charges for placing the false bomb, making a terroristic threat and abandonment of an animal. A husky was found by police in the trunk of the vehicle, seemingly unharmed.

Investigators have given the "all clear" after the NYPD closed off several blocks near the Queens Place Mall to investigate a report of a potentially suspicious vehicle Monday morning, a senior law enforcement official tells News 4. Video posted to the Citizen app captured the initial response.

NYPD officials had been trying to trace if the car was stolen in Nevada or was already in New York when it was taken. Police believed Lyne was the one who may have initially stolen the Tesla. There were also some indications based on items found inside the vehicle that Shenker may have been living inside the vehicle, investigators have said.

Meanwhile, Shenker has described himself on social media as a self-described "American nationalist" and a “patriot,” and a supporter of former president Donald Trump. He was previously arrested Dec. 30 for allegedly torching a Black Lives Matter poster attached to a police barricade in Manhattan. He was arraigned and released on that charge just three days before the Queens incident.

Shenker has appeared on the online conspiracy show InfoWars and has filled his social media accounts with far-right views and buzzwords like “#MAGA” and “#StopTheSteal,” noting his support of Trump's false claim that the 2020 presidential election was rigged.

Shenker was expelled from the University of Massachusetts Amherst amid a controversy over his views. His lawyers alleged he was a victim of anti-white and anti-Jewish attacks and that faculty members conspired to file false hate crimes charges against him because his views did not align with theirs.

On a since-suspended Instagram account, Shenker mocked the practice of people including their preferred pronouns by listing his as “American / Patriot,” and has posted online attacks on Black Lives Matter, pushed conspiracy theories and railed against wearing masks and lockdowns to combat the coronavirus pandemic.

Both Lyne and Shenker face seven years in prison if convicted.