The suspect's grandfather, Gerald Brevard Sr., said his grandson was once homeless, and he doesn't know why he would target others in such a vulnerable position

A 30-year-old man suspected of shooting five homeless men in New York City and Washington, D.C., in a targeted and at times deadly attack spree was once homeless himself, his family said, and has suffered from mental illness.

Gerald Brevard III was arrested early Tuesday following a multistate manhunt, according to officials in both cities and a senior law enforcement official with direct knowledge of the case.

The suspect's grandfather, Gerald Brevard Sr., said his grandson was once homeless, and he doesn't know why he would target others in such a vulnerable position. 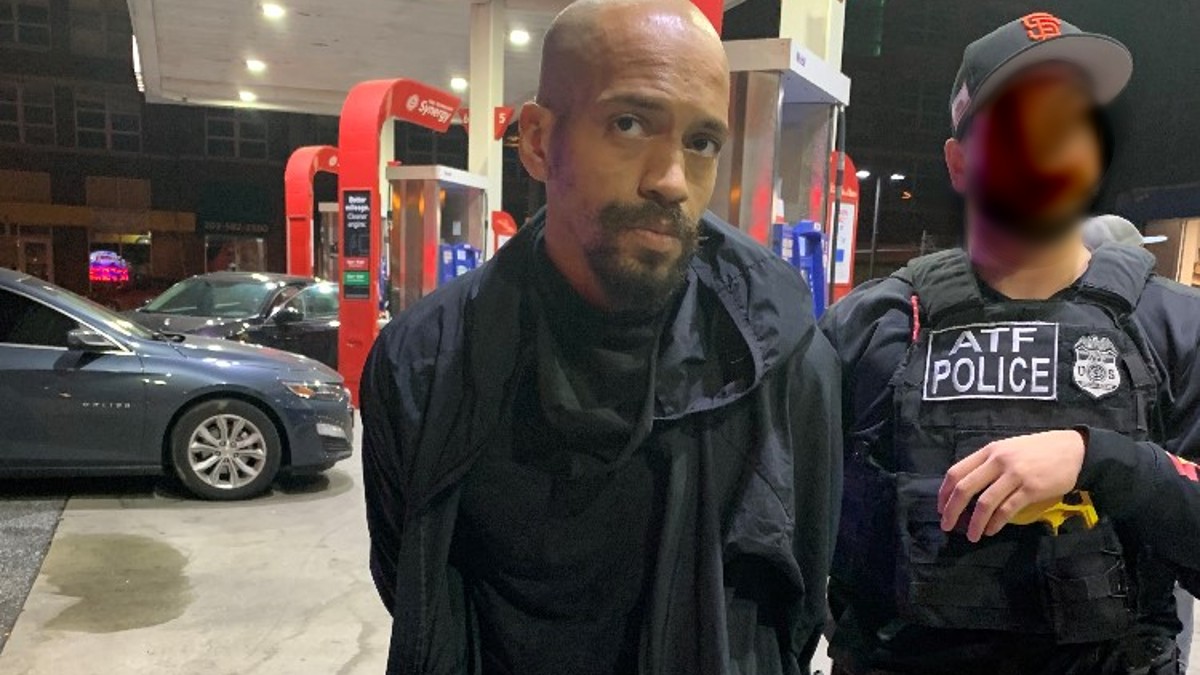 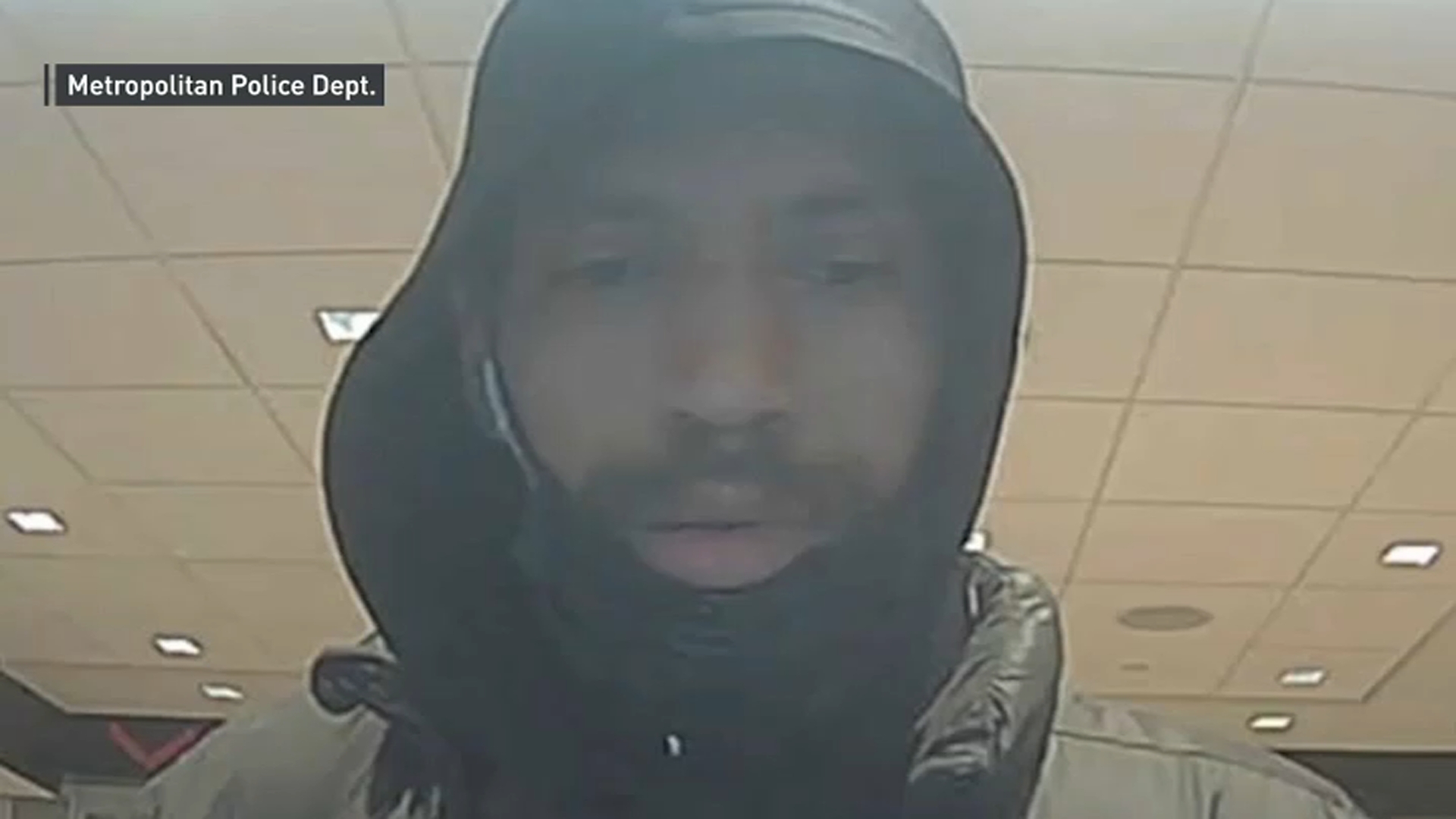 Gunman Wanted in 5 Targeted Attacks, Two of Them Deadly, on Homeless in NYC and DC

"My grandson has suffered with mental problems for a while, so I just hate that anything like this happened," Brevard Sr. told NBC New York over the phone. "I’m hurt. I’m (inaudible) and like I said, I offer my prayers and condolences to the victims."

Brevard Sr. declined to comment specifically on the case, but told NBC New York, "I'm deeply saddened about the victims. Everyone that was injured and killed. My condolences to the families of the victims."

Gerald Brevard Jr., the suspect's father, said in a statement that "like many across the world, [his son] suffers from mental illness… the system has failed regarding the treatment of so many, including my son."

In a statement sent to a New York Times reporter, Brevard Jr. expressed his condolences to the victims and their families. He said his son's illness hadn't been addressed despite multiple encounters with the criminal justice system, according to the paper.

"I cannot speak to the details of the case," the suspect's father told the Times. "I can only speak to the issue of the failure of the judicial system identifying that my son suffers from mental illness but not treating it."

One of the two victims shot by the man allegedly targeting homeless men in New York City and DC says his arm is in pain. NBC New York's Marc Santia reports.

Brevard was arrested in DC on murder, assault and other charges after news of the killings had added new fears to people spending nights on the streets of the two cities and elsewhere. Officers staked Brevard out and Bureau of Alcohol, Tobacco, Firearms and Explosives (ATF) agents, with weapons drawn, took him into custody at a DC gas station, Essig said.

A senior law enforcement official with knowledge of the case said DC cops got a tip after releasing clear images and video of their suspect — and the NYPD got a tip about his name. Both tips helped track the 30-year-old suspect down.

NYPD Chief of Detectives James Essig said officials received over a dozen Crime Stoppers tips and described Brevard as a "strong person of interest" in the NYC shootings. He was being questioned by both New York and Washington detectives.

He was wearing similar clothes as he had worn when he allegedly shot the victims in Manhattan Saturday, the official said, but had no weapon on him. He lives in the Washington area.

Police are now contacting other cities to determine whether or not the suspect might be responsible for attacks elsewhere. Though he hasn't been charged yet in the New York cases, police feel “very confident” they have identified the correct suspect, Metropolitan Police Chief Robert Contee said.

Investigators are now looking into why the man was out roaming the streets of DC overnight once again, wondering if he planned any additional attacks despite not having a gun on him when he was found. In both New York cases, the official said the suspect walked around the block and pulled the trigger after scouting the area. Police said .22 caliber shell casings were discovered at all the crime scenes.

The senior official said Brevard's record includes at least one past assault on a woman in Virginia. Essig added that Brevard had multiple contacts in other states down south but no connections in New York. No other details have been released at this point regarding him.

Brevard hasn't offered any inkling of a motive during interviews with detectives, and authorities believe he may have been randomly targeting the victims, Contee said.

Police now have a clearer look at the man believed to have been responsible for targeting the homeless in shootings in NYC and D.C., and surveillance video shows him open fire on one of the victims on a SoHo sidewalk. NBC New York's Checkey Beckford reports.

The suspect had been eyed in at least five attacks on homeless people in Manhattan and Washington, D.C., in a nine-day span. The first attack in the pattern came on March 3; the latest two were the ones Saturday in New York City.

Two of the victims were killed, including a man found shot on Lafayette Street and one discovered in a burning tent in Northeast D.C. Chilling video of one of the attacks sent shockwaves across the nation for its callous disregard for human life.

"We promised that we’d bring this killer to justice. We kept that promise," Mayor Eric Adams tweeted Tuesday upon news of the arrest. "Thank you to all of our partners in law enforcement for their good work. Public safety is the prerequisite to prosperity. Keeping our streets safe means bringing our country back."

Court records show Brevard was arrested in July 2018 on assault charges and later pleaded guilty to attempted assault with a deadly weapon. He was found mentally incompetent to stand trial in June 2019. Records show Brevard was sent to St. Elizabeths Hospital, a psychiatric facility in DC. A month later, he was deemed competent to stand trial. Soon after, records show, he pleaded guilty and was sentenced to a year in prison. That sentence, however, was suspended.

Investigators in the two cities began to suspect a link between the shootings on Sunday after a Metropolitan Police Department homicide captain — a former resident of New York City — saw surveillance photos that had been released Saturday night by the NYPD while scrolling through social media.

The man in those photos looked similar to the one being sought by his own department.

D.C. Police Chief Robert Contee credited the quick coordination between departments, saying that without that officer making the connection, “It could have been months,” before the link between the attacks was discovered.

After five homeless men were attacked in New York City and D.C., two of them fatally, the city Newark is stepping up its safety protocol for its homeless population. NBC New York's Sarah Wallace reports.

The earliest known shooting happened at around 4 a.m. on March 3 in Washington, D.C., police said, when a man was shot and wounded in the city's Northeast section. A second man was wounded on March 8, just before 1:30 a.m.

At 3 a.m. the next day, March 9, police and firefighters found a dead man inside a burning tent. He was initially thought to have suffered fatal burns, but a subsequent autopsy revealed that the man had died of multiple stab and gunshot wounds.

The killer then traveled north to New York City, police said. At 4:30 a.m. Saturday, the sleeping man was shot, and about 90 minutes later, the gunman fatally shot another man on Lafayette Street in SoHo, police said. The man’s body was found in his sleeping bag just before 5 p.m. Saturday.

“He looked around. He made sure no one was there. And he intentionally took the life of an innocent person,” Adams said.

D.C. police confirmed there were ballistic links between the shootings, and said that all five of the shootings were linked back to the same gun. Police believe that Brevard took public transportation back and forth between D.C. and New York.

New York City police said that the gunman shot the victims without saying a word or having any interaction with them, and D.C. police said they believe the three shootings were "very much consistent" with what was seen in NYC.

Neighbors on King Street identified the man who survived the heartless shooting. He was seen on Monday with a bandage on his right arm, returning to the scene of the gunshots to collect his belongings.

The victim told NBC New York that he is OK, though is still in pain and bleeding from the wound. The man, who did not want to be identified, also said he didn't know why he was targeted, but feels safer knowing there has been an arrest and is grateful to be alive. Police aren't sure why he was targeted, either, nor why the suspect would have been in the city.

In all five incidents between the two cities, all five victims were men experiencing homelessness who were sleeping outside, and in most instances were alone. The D.C. police commissioner said that they are confident that the five shootings are the only victims, but said it is possible there are more out there.

On top of tracking surveillance video, law enforcement authorities are also asking agencies along the East Coast to see if they have any similar unsolved cases, two senior law enforcement officials said Monday. 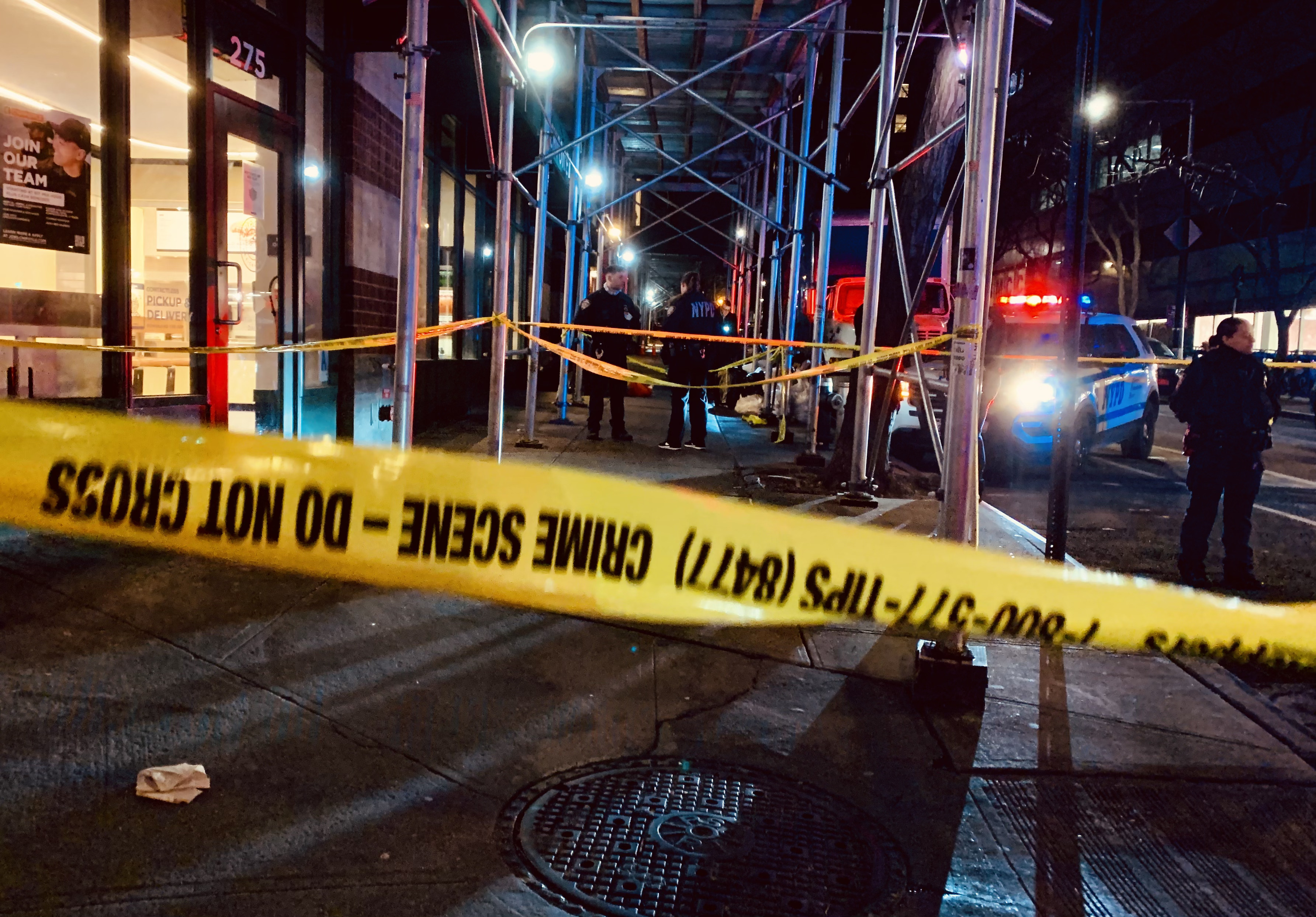 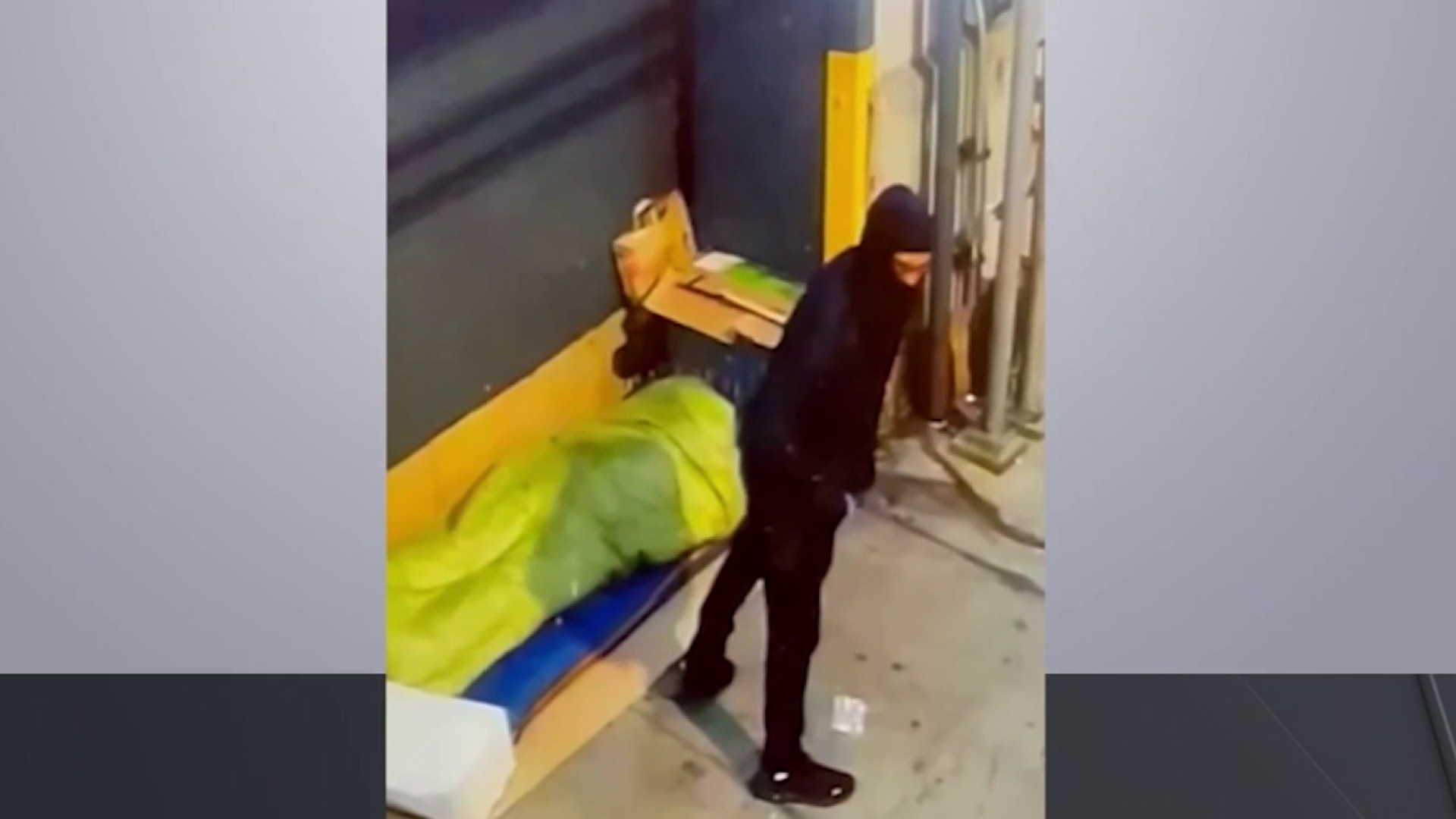 "Homelessness should not be a homicide. This was a cold-blooded attack," Adams said at the Monday evening press conference from D.C. "When you look at the pre-meditative action of the shooter, it sends a clear and loud message that we need the help from the public...Someone knows this person. We are asking for the public to find him."

The latest attacks were reminiscent of the beating deaths of four homeless men as they slept on the streets in Chinatown in the fall of 2019. Another homeless man, Randy Santos, has pleaded not guilty to murder charges in those attacks.

A year ago, four people were stabbed in New York City, two fatally, by a man who randomly attacked homeless people in the subway system. That assailant, who was also homeless, is awaiting trial.