Not one, not two, but three tornadoes touched down on Long Island Saturday in a first for Nassau and Suffolk counties, which have no records of a tornado striking in November.

The National Weather Service confirmed two EF-0 tornadoes and an EF-1 tornado hit a series of towns across both Long Island counties as a line of severe thunderstorms pushed east after blowing through New Jersey and New York City.

A team of NWS surveyors spent Sunday crisscrossing storm damage, tracking the paths of the systems and confirming the rare events for communities shocked to see tornadoes blow through. 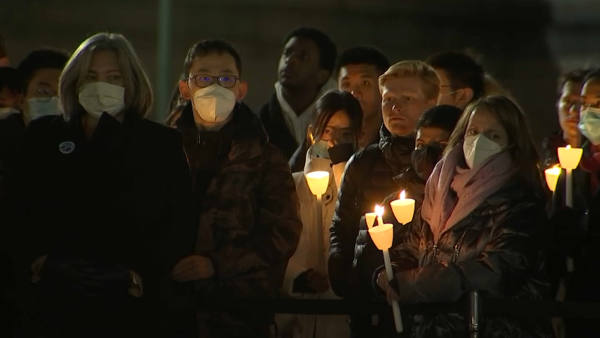 In Nassau County, officials first confirmed an EF-0 tornado with maximum wind speeds of 85 mph touched down in Woodmere, Uniondale and Levittown. Two separate tornadoes, another EF-0 and a more powerful EF-1, also formed in Suffolk County within an hour of the first system. The former struck East Islip and Oakdale, while the latter and flew from Shirley to Manorville, according to the NWS.

According to their report issued Sunday, the first EF-0 tornado touched down shortly after 2:30 p.m. in Woodmere where it knocked down multiple trees and powerlines. Then, the tornado "lifted and skipped," traveling 50 miles per hour as it moved toward Hempstead.

The next touchdown appeared to be in Uniondale, surveyors found, where the tornado tore a roof off of a two-story colonial building. The roof landed on a nearby house. Debris from other structures, including shingles, siding and insulation was found a block over.

The weather agency also confirmed a touchdown in Levittown, where the system was responsible for uprooting a giant tree that split a house nearly in two. The house on Clover Lane had been under construction and was empty at the time Saturday's storms raced through.

The tree was big enough to rip up part of the sidewalk along the front of the property.

"I couldn't believe it. It's a huge tree, you can see it's off the slab, it's crazy. This house has to be completely taken down and started over," Nick Barberio told News 4.

The tornado's fury ended in Levittown minutes before 3 p.m. where some of the worst destruction in the county was observed. It only took 20 minutes for the second EF-0 system to appear over in Suffolk County.

A second report Sunday by the NWS confirmed the Suffolk tornado dropped down in East Islip where its winds uprooted a few dozen large trees. Then the tornado "likely lifted over the John F. Kennedy Elementary School sport fields, becoming a funnel cloud."

The surveyors believe that funnel cloud briefly touched back down as a weak tornado in Oakdale where it toppled a tree, destroying a home in the area of Frog lane and Jade Street.

The damage is still being surveyed after a line of powerful storms caused havoc across the tri-state. NBC New York's Adam Harding reports.

And finally around 3:45 p.m. Saturday, a third and significantly stronger tornado appeared in Suffolk County. The NWS said the tornado touched down in Shirley around Francine Place and Mastic Boulevard where trees and homes felt the brunt of the system.

"The tornado then hooked northeast over the Lidl supermarket, flipping over a 5-ton air handler unit on the roof, before tearing off the parapet and collapsing the covered walkway of the Chipotle Mexican Grill on the northeast corner of the shopping center," the latest report from the NWS said.

Sidings and shingles were thrown around as winds between 95 and 105 mph uprooted trees around town. The tornado peaked soon after when the roof of a two-story residence flew off and 150 yards away into the a nearby home and several backyards.

The Brookhaven Calabro Airport became the tornado's next target, moving northeast, and briefly sent several small engine planes into the air. Storm surveyors say the tornado weakened to an EF-0 around this time. Within winds still around 85 mph, it moved toward Manorville while shearing tree tops and snapping trunks before flipping over a large camper.

Storm Team 4 says the tornadoes are the first on record to touchdown on Long Island in the month of November.

Saturday's line of severe thunderstorms also left significant damage in Suffolk County. The NWS team had planned to visit Mastic and Shirley, in addition to Stonington, Old Lyme, Branford and Cheshire in Connecticut.