‘She Was in Fear for Her Life:' Shannan Gilbert's Sister Blasts Suffolk Cops Over Gilgo Probe

"It doesn't matter if people think that she's a victim of the Long Island serial killer. Something happened to her night. She was in fear for her life. She called 911. She was coherent enough to stay on a phone call for over 20 minutes," Shannan Gilbert's younger sister, Sherre, said Tuesday

The sister of a 23-year-old escort from New Jersey whose 2010 disappearance on Long Island sparked an investigation that led to the discovery of nearly a dozen sets of remains and a search for a possible serial killer blasted the Suffolk County police department Tuesday over the case following the release of her 911 calls last week.

Shannan Gilbert disappeared in Oak Beach, a quiet gated community off Suffolk County's Ocean Parkway, on May 1, 2010, after meeting with a client. Her remains were found not far away about a year and a half later -- but four bodies, specifically, recovered in December 2010 amid the search for Gilbert exposed a possible killer.

Suffolk detectives have long said Gilbert wasn't one of those victims. Her sister, Sherre Gilbert, intensely disagrees. She spoke Tuesday to reporters for the first time in years, and though she says she didn't listen to the recently released 911 calls -- there were three of them made May 1, 2010, including a near 22-minute one from Shannan herself -- Sherre Gilbert was adamant local authorities "dropped the ball from the beginning."

"I don't believe it. I just feel like they've never cared ... and I just feel like it's a way to just confirm what they've always said," Sherre Gilbert said of the longstanding contention her sister's death was, as Suffolk police say, a "tragic accident."

Sherre Gilbert said local law enforcement was pushing the same theory even before her sister's remains were found in a reedy marsh near Oak Beach -- not far from where the other grim discoveries were made along a desolate stretch of Ocean Parkway.

What transpired on the 911 recordings involving the 24-year-old woman the last night she was seen alive was kept secret for the 12 years until Suffolk police shared them Friday, part of an ongoing effort at transparency around the Gilgo Beach case.

Richard Dormer, who was Suffolk County police commissioner at the time, "was already telling everybody that she potentially died an accidental death -- some drug-induced paranoia, ran into the marsh and died even before she was found," Sherre Gilbert said. "I just feel like this just reaffirms what their initial theory was."

"It's disgusting," she added. "What's the motive, what's the agenda behind this? It doesn't matter if people think that she's a victim of the Long Island serial killer. Something happened to her that night," the sister continued. "She was in fear for her life. She called 911. She was coherent enough to stay on a phone call for over 20 minutes. She was coherent enough to knock on people's doors. So that leads me to believe -- why would she then go into the marsh? That to me just doesn't make any sense."

Suffolk County police argue it makes sense to them. In sharing the never-before-heard 911 calls in their entirety on Friday, years after being court-ordered to do so, cops offered an analysis alongside the audio -- and reiterated the theory that has riled Shannan Gilbert's family and advocates ever since her remains were found in late 2011.

Shannan Gilbert had called 911 and said someone was trying to kill her. That call lasted about 22 minutes. There were two other calls. The search for her led to the discovery of four women in burlap sacks in a matter of days

Their prevailing theory is that Gilbert's case is separate from the bodies that were found in the search for her. While 10 sets of remains were discovered between December 2010 and April 2011, investigators believe the first four -- all missing escorts who had advertised their services on Craigslist, all strangled, wrapped in burlap sacks and dumped within a quarter-mile stretch of Ocean Parkway -- were killed by one person.

Suffolk County law enforcement has said they don't believe Gilbert was killed by a person at all. They believe she got disoriented and succumbed to the elements. In describing the 911 tapes, they acknowledge she was at times coherent. At others, she appeared disoriented. She didn't respond at some moments -- and screamed at others.

Sherre Gilbert has her own ideas about what happened. She says she believes someone found her sister after she tried to get help at the house of the woman who made the third 911 call and potentially drugged her to calm her down since she had become hysterical. Sherre Gilbert says maybe her sister died after that, an accident, and someone (or someones) took her body and dumped it on the marsh, scattering her belongings along the way to make it appear she wandered there herself.

"If you notice on the map, when you see where her remains were, from where her clothes are, they're in two different locations," Sherre Gilbert explained. "So I feel like they took her remains and put her there from the roadside and then went back to put her clothing on the opposite side. I don't believe that my sister would run."

An autopsy proved inconclusive as far as Shannan Gilbert's cause of death. A private pathologist hired by the Gilbert family also found insufficient evidence to determine how she died. But the pathologist, the noted Michael Baden, who has been hired to do independent autopsies by George Floyd's family and others, did say Gilbert's remains showed signs that could be consistent with manual strangulation as a potential cause.

Details on the report were previously reported by News 4. Read it here. 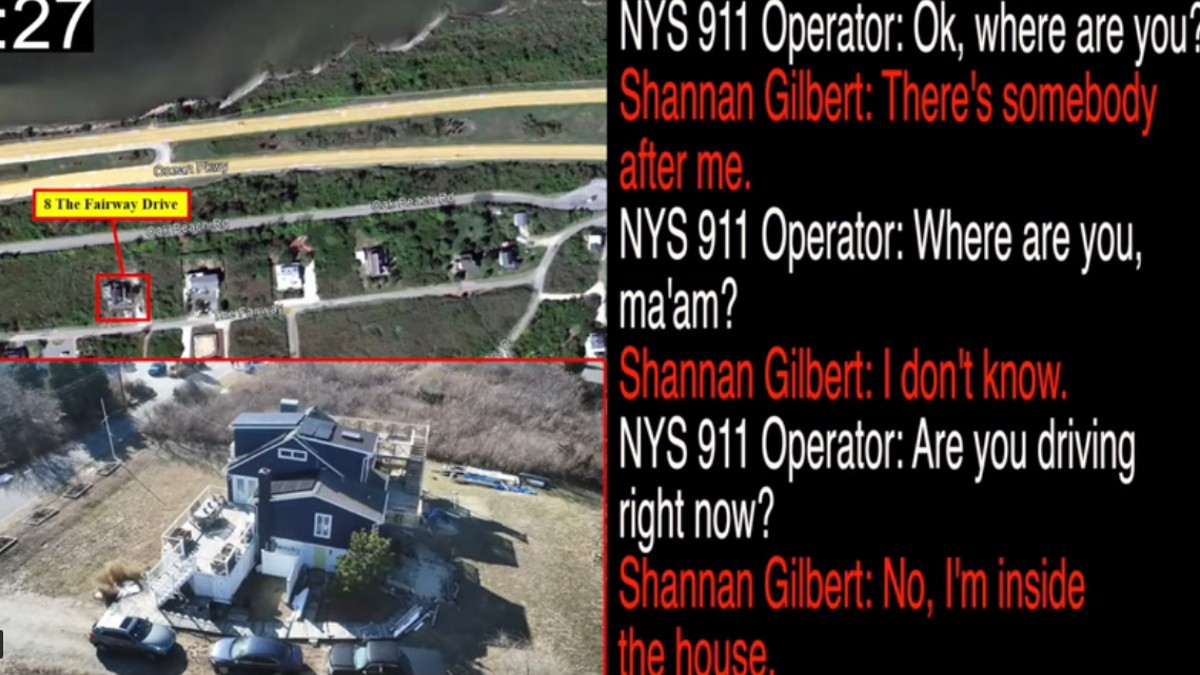 ‘Somebody's After Me:' Shannan Gilbert's Long-Secret 911 Calls Are Out. Listen Here 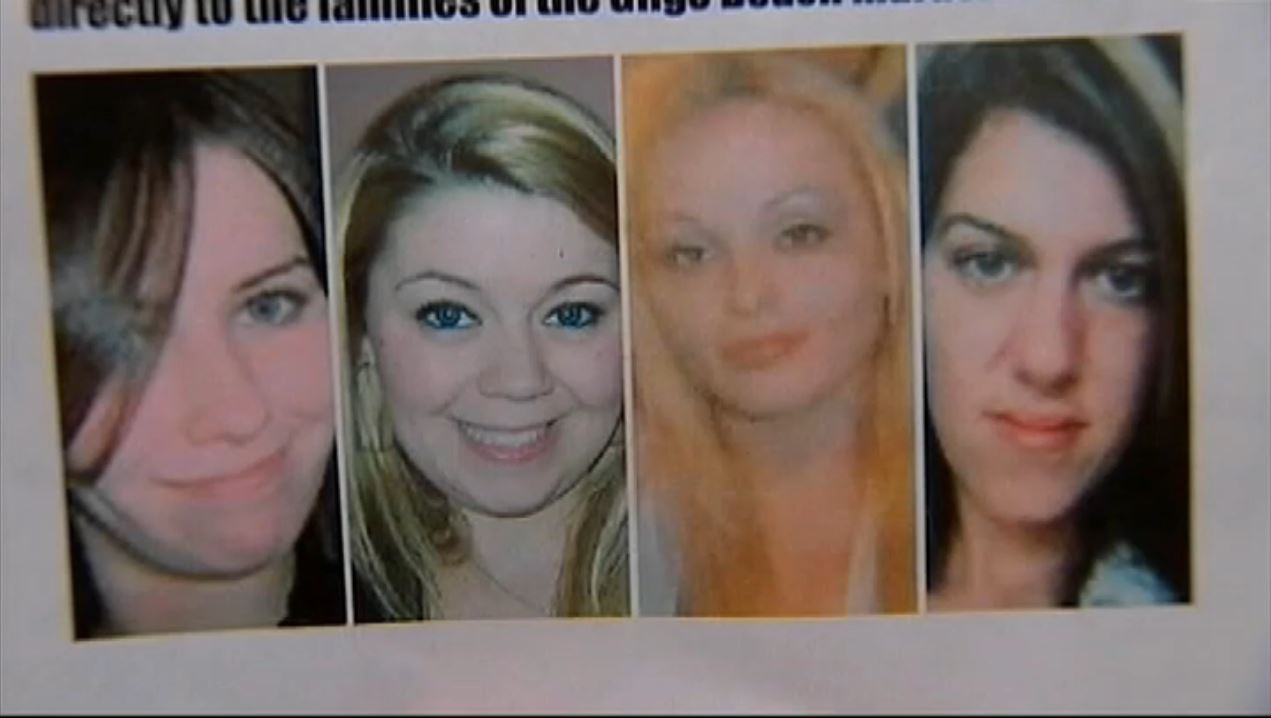 Gilbert's family, especially her mother Mari, kept her case in the public eye until Mari Gilbert was brutally killed by another one of her daughters, a schizophrenic, nearly six years ago. Mari Gilbert often appeared alongside family attorney John Ray at press briefings and pushed for her daughter to be considered a Gilgo serial killer victim.

Ray stood alongside Sherre Gilbert Tuesday as she spoke to reporters from his law offices on Long Island.

"Shannan Gilbert was murdered. The evidence is overwhelming and the police department have covered that up," the lawyer said.

Ray also pledged to continue fighting for Shannan Gilbert and called for an independent investigation. Sherre Gilbert supports that idea, whatever it finds.

Suffolk County police released Shannan Gilbert's 911 calls and reiterated their belief that Gilbert was not a victim of the Gilgo killer. Greg Cergol reports.

The fact Suffolk police officials didn't tell her or Ray in advance of their plans to release the 911 calls further stokes the sister's mistrust. She called the move disrespectful.

"If you're going to release my one-on-one call with my sister's last words on there, why would you not let the family hear that? Why not her loved ones. Why not with the attorney?" Sherre Gilbert asked. "Why are you releasing it to the public before you even tell the family and the attorney?"

The Gilbert family once again asserted the belief that a retired Suffolk Police Department surgeon who lived in Oak Beach played a role in Gilbert's death. The department again ruled out his involvement on Friday, when the tapes were released.

In response to Sherre Gilbert's comments Tuesday, the Suffolk County Police Department said only that "if anyone has additional information to further this investigation, the department is asking them to come forward."

No arrests have been made and no suspects have ever been identified in Shannan Gilbert's case or in the cases of any of the victims found amid the search for her.

Authorities have said another killer -- or other killers -- could be responsible for the deaths of the other people found in the area in the time after Gilbert disappeared.

A $50,000 reward is being offered for information in the case that leads to an arrest. Anyone with tips about the victims or a potential suspect or suspects is asked to contact Crime Stoppers at 1-800-220-TIPS (8477).