It was three days after September 11, 2001 when the motorcade for President George W. Bush made its way towards Ground Zero. There, he would survey the unimaginable wreckage, thank the tireless rescue workers and attempt to inspire the grief-stricken nation.

Bob Beckwith, at the time a 69-year-old former New York firefighter whose retirement was interrupted by his overwhelming desire to assist at Ground Zero, hoped to get a view of the president as he made his speech. Assuming Bush would speak across the street at a command post set up with a tent and microphones, Beckwith climbed atop a fire truck that he and other workers helped remove from the rubble earlier in the day.

While awaiting the president’s arrival, Beckwith was approached by a member of the Secret Service.

“He dusts off next to my feet and says, ‘Is this safe?’” the now 89-year-old Beckwith said during a phone interview with NBC earlier this week from his longtime home in Baldwin, Long Island. “I said, ‘Yeah, it’s a fire engine.’ He said, ‘Show me. Jump up and down on it.’ So, I jumped up and down on it. When Secret Service tells you to do something, you do it.

New York City and the nation mark the years since the terror attacks on Sept. 11, 2001 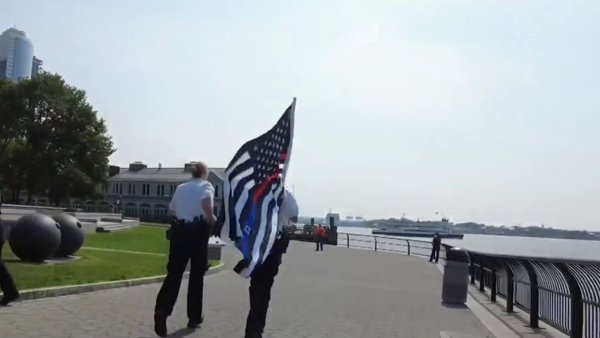 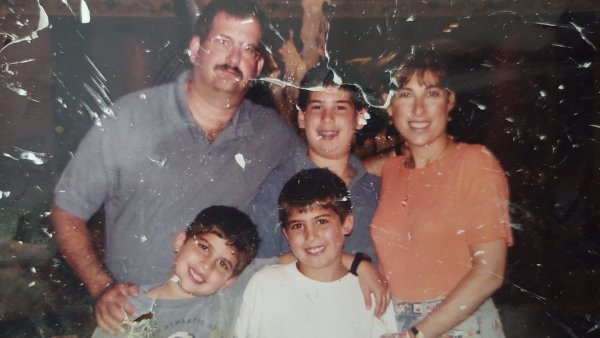 ‘Life Does Go On': Ex-Officer Learns Family in Photo Found in 9/11 Rubble Had Survived

“So, the guy tells me, ‘Look, there’s somebody coming over here and when they do, you help them up and then you get down.’ I figured there goes my nice spot.”

Instead, Beckwith took his spot in history. His face appearing on every television across the country, his photo gracing the cover of Time magazine, his presence symbolizing the efforts and sacrifices made by first responders during the country’s darkest days.

“I see the president on the corner and he’s headed for the microphones across the street, but he did a hard right and he comes right in front of me and he puts his arm up,” Beckwith recalled. “I said, ‘Oh my God.’ I pulled him up on the rig, I turned him around. I said, ‘Are you OK, Mr. President. He said. ‘Yeah.’ So, I start to get down and he said, ‘Where you going?’ I said, ‘I was told to get down.’ He said, ‘Oh no, you stay right here.’ And he put his arm around me.”

Getting to Ground Zero

Bush’s speech, delivered 20 years ago today, produced some of the most defining words and images in the country’s initial 9/11 response.

That Beckwith, who had retired seven years prior after 30 years with the FDNY, stood shoulder-to-shoulder with the president as the world watched was the result of pure happenstance. Beckwith shared the stage with president that day, but he would have been nowhere near the national spotlight had he failed to convince his family and the National Guard to let him go to Ground Zero.

On the morning of September 11th, Beckwith’s grandson was hit by a vehicle while on his way to school. While by his grandson’s side at the hospital later than morning, Beckwith watched the twin towers collapse.

“I couldn’t believe what I was seeing,’” Beckwith said. “It felt like I was having a bad dream, my grandson getting hit by a car and then the twin towers.”

While watching the coverage later that day, Beckwith informed his family he would be going to Ground Zero to help with survivors.

“My kids are telling me, ‘You’re 69 years old. You’re too old to be down there. Don’t go down there,’” Beckwith said.

After learning that the son of a friend and fellow firefighter was among the missing, there was no stopping Beckwith — even if it meant being untruthful to the National Guard. Beckwith said when he arrived at Ground Zero, the National Guard was surrounding the perimeter and initially turned him away.

“I had to think fast,” Beckwith said. “I said, ‘You gotta let me in. if I don’t get in there, I’m going to get in trouble because I missed the rig this morning.’ They let me in.”

Once inside, Beckwith said he joined the bucket brigade, helping to pass along buckets filled with rubble to clear debris and search for victims.

Word began to circulate that Bush was en route. Hours later, the president had a bullhorn in one hand and his other arm around Beckwith’s shoulder as he addressed rescue workers.

“The guys on the left said, ‘We can’t hear you!’” Beckwith said. “That’s when the president changed his whole speech and made it up as he was going.”

The U.S. marked 20 years since the terror attacks of 9/11 at ceremonies across the country.

It’s a speech that Beckwith, seven months shy of his 90th birthday, recites word for word.

“I can hear you,” Bush said. “The rest of the world hears you. And the people who knocked these buildings down will hear all of us soon.”

The crowd erupted into chants of USA.

“They went berserk. That was really something,” Beckwith said. “And there I am standing there. I did look up to heaven and I did say, ‘Look at me, Ma. I’m with the president.’”

Bush shook hands with Beckwith and then was handed a small American flag that he began waiving to the crowd, making for a photo of Bush and Beckwith that would soon be on the cover of Time magazine with the headline “One Nation, Indivisible.”

As Beckwith prepared to go back to work, he was tapped on the shoulder.

“It was someone from Secret Service,” Beckwith recalled. “He said, ‘The president wants you to have this flag.’”

Beckwith, who said he was unaware that cameras were on site at Ground Zero, left later that night with the flag and a question in mind.

“I wondered who is ever going to believe that I was with the president,” he said.

The world is watching

One of his six children, Richard Beckwith, was flying from California to his home in Pittsburgh, unaware that his father was standing beside the president.

“I walked in the house and my wife and kids are yelling, ‘Grandpa’s on TV! Grandpa’s on TV!’ I was like ‘Wow, check that out.’ I was stunned. I wondered how he got himself into that position.”

The phone at Beckwith’s house had been ringing endlessly with calls from those who saw him. When Beckwith returned home from Ground Zero, neighbors came out of their houses.

“Guy across the street comes over and says, “Beck, you were on television.’ I said, ‘Get out of here. There were no cameras. He said, ‘Go on and see.’ I came inside the house and my granddaughter is sitting on the couch. She said, ‘Grandpa, you’re on television. I looked over and said, ‘Oh my God, I’m on TV.’ You couldn’t see the cameras, but they saw you.”

And so did the rest of the world.

Beckwith was pictured in nearly every newspaper across the country. He was flooded with media requests, initially turning them down. He got autograph requests in the mail, saying this month he received requests from as far as Russia and Slovakia.

“It was like Holy cow,” Richard Beckwith said. “I remember going to the store with the family Saturday morning and seeing my dad in the newspapers and saying he is all over the place. It was amazing to see this totally modest individual become a celebrity, per se.”

Beckwith receives a Christmas card with a holiday-themed painting on the front every year. Each card gets a presidential signature from its painter, George W. Bush

Beckwith said that he and his wife, Barbara, were invited to the White House Christmas party each year Bush was in office.

“I have memories,” he said with a laugh.

Divers in Key West installed an American flag below the ocean’s surface to commemorate the 20th anniversary of 9/11.

Beckwith went on to do public speaking and fundraising in the U.S. and internationally, donating all money he received to the New York Firefighters Burn Center Foundation.

Like many who survived 9/11 and those who took part in the rescue effort, Beckwith did not come away unscathed. He continues to undergo treatment at Sloan Kettering Cancer Center for malignant melanoma on his face and ears.

Still, Beckwith said, he was exactly where he was meant to be that September day, representing one of many doing whatever necessary to lend a helping hand during America’s greatest time of need.

Hanging in the den of Beckwith’s home is a frame encasing a first-edition copy of the Time magazine he’s on the cover of. Alongside it sits the American flag given to him by President Bush, serving as a constant reminder of a pain that will never subside but also a country that will never succumb.

“It’s not about me,” Beckwith said. “It’s about the president and the country, and it was for a terrible tragedy. I’m not gonna pat myself on the back, I didn’t do anything. When the president was there, I just happened to be in the right spot at the right time.”