The attorneys said their clients want to remain anonymous because they have received death threats, and because they fear retribution by the Trump supporters in the car

Protesters who said they were hit by a car full of President Trump supporters in Times Square met with the Manhattan district attorney's office on Friday, demanding those they believe to be responsible for their injuries be charged.

The lawyers representing the five victims said they suffered injuries, including broken bones and cuts requiring stitches when they were struck by the black Ford Taurus during the night of September 3rd. The attorneys said their clients want to remain anonymous because they have received death threats, and because they fear retribution by the Trump supporters in the car.

"We won't rest until every supporter, every person that drove their car — which is a felony assault — be brought in handcuffs," said Rev. Kevin McCall of the Crisis Action Center. "We want to make sure that every officer that Is responsible for leading them into the protesters be arrested and fired because they did a criminal act as well.”

The lawyer called on anybody who may have witnessed the incident to contact the Manhattan district attorney's office to provide statements.

After finding the car that was seen on video going through a crowd of demonstrating in Times Square the death of a Black man in police custody, NBC New York's Marc Santia talked with a passenger in the car and a protester about what they experienced.

Two of the people who were injured in the incident previously met with the NYPD to file a formal complaint, lawyers announced at a press conference over Labor Day weekend.

The protesters who interviewed with police are two of five individuals who were struck by the black sedan and suffered "serious personal injury," their lawyer, Sanford Rubenstein, said.

"What we're asking for is the Manhattan district attorney to bring charges of assault with a deadly weapon," the lawyer said. "This city should be a city in which peaceful protests can take place without the risk of being seriously injured. Unfortunately that's not what happened."

Protesters were demonstrating over the death of 41-year-old Daniel Prude, a Black man who died March 30 after he was taken off life support, seven days after the "spit hood" encounter with police in Rochester. He had been taken into custody for a mental health evaluation about eight hours before the confrontation.

A Rochester, New York, family is demanding justice after their brother, Daniel Prude, died as he was restrained by police during a mental health call. Footage released by Rochester police and provided to NBC by Prude's family showed a part of what happened to Prude on March 30 before he died.

Last week, the NYPD said it could not take any action against the driver or occupants of the black sedan because a report had not been filed.

Videos posted on social media immediately following the alleged assault showed the sedan careening down West 46th Street, its horn blaring, as demonstrators scrambled out of the way.

At one point, social media users who saw the video speculated about whether the vehicle was an unmarked police car because it had a push bar, also commonly known as a bullbar or push bumper, that's found on NYPD vehicles and other SUVs. The NYPD tweeted clearly, "This auto is NOT an NYPD vehicle," and said no complaints had been filed in the incident, hindering the investigation.

Police also said they specifically told the five counter protesters inside the car to turn through the taxi well at the nearby Marriott to avoid the protesters, but the car went straight through the crowd instead. 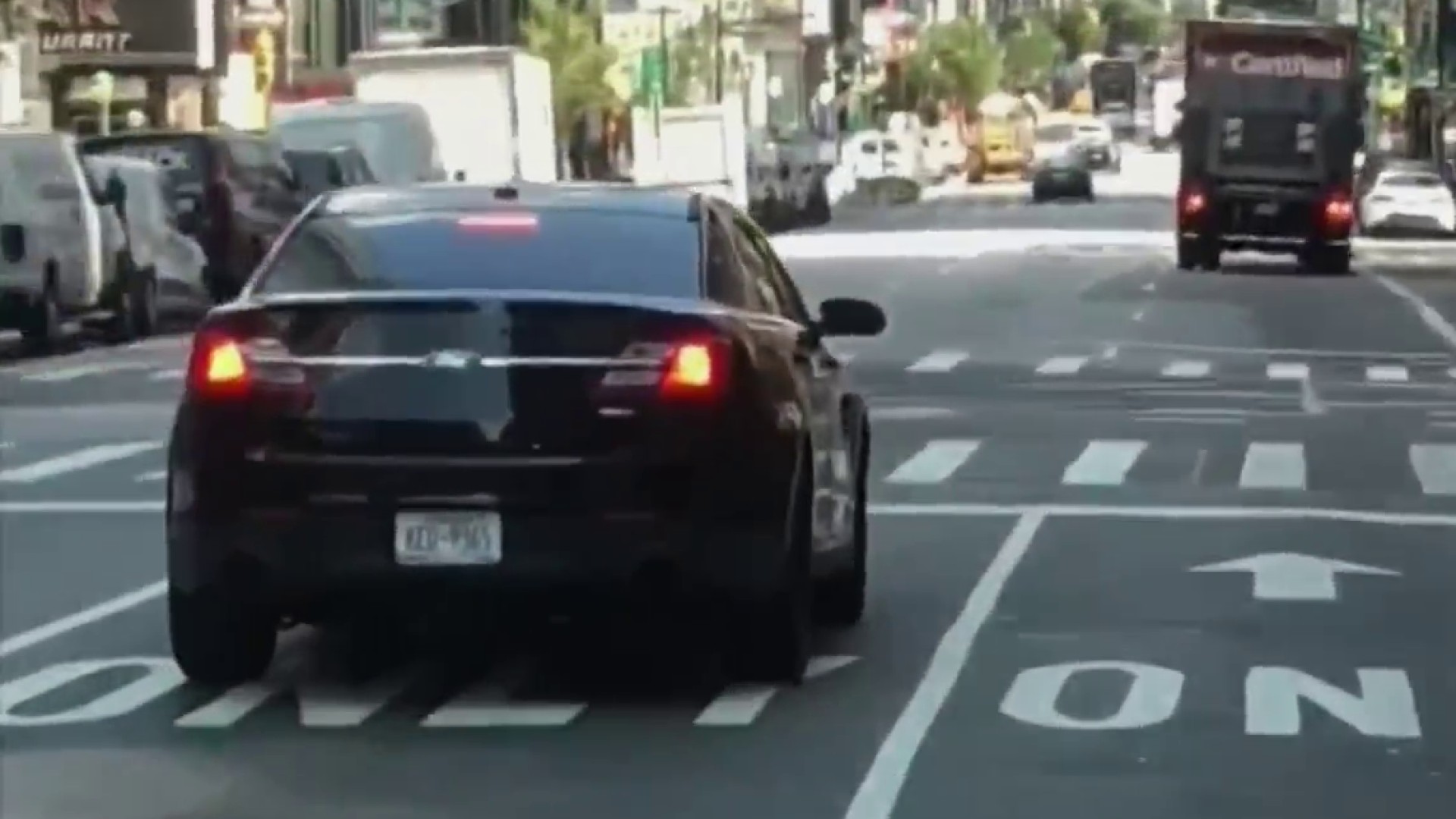 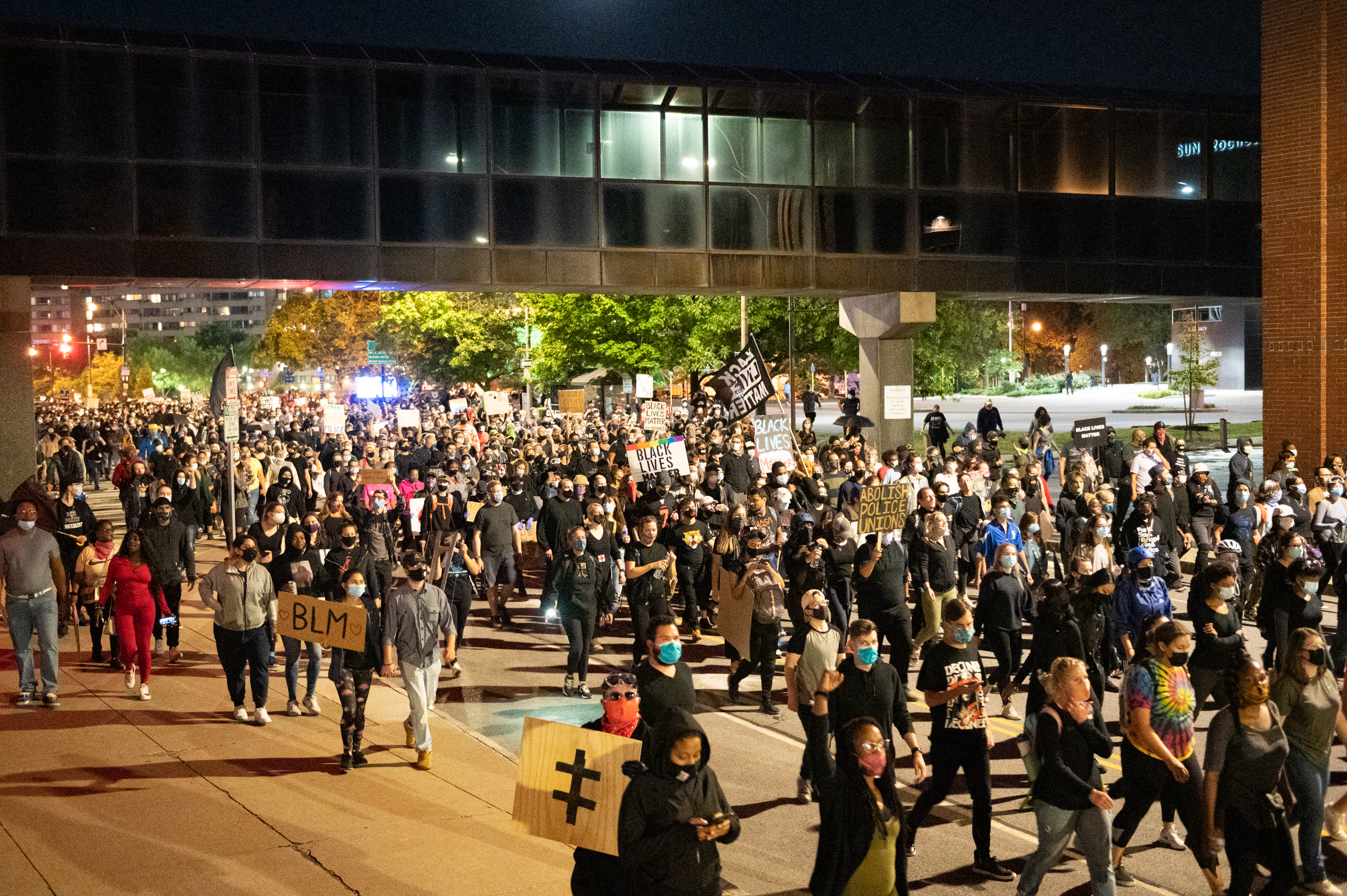 A passenger in the vehicle, Juliet Germanotta, said she saw "my life flash in front of me" as she saw protesters gather around the vehicle. She said the driver was a pro-police activist but not part of their group, and offered to drive them away because, she says, “a mob” was trying to attack them.

"The protesters got on 46th Street, blocked us in. Started trying to open the car, hitting the car," Germanotta said. "The driver then drove through to try and get us to safety."

She had posted on her Instagram page a video showing her decked out in Keep America Great gear, saying there was set to be "a peaceful group of protesters coming out here." Germanotta has previously clashed with Black Lives Matter protesters, and has been taken into custody multiple time for dumping paint on the mural outside Trump Tower.

She said that the driver "saved our lives" and that police have interviewed all six people who were in the car, and continue to investigate the incident.

The news site Gothamist reported that the vehicle’s license plate matched a Ford Taurus Police Interceptor linked to pro-police activist Hakim Gibson, whose Instagram page is filled with portraits of police officers around the city.

The NYPD says it is trying to locate a car that drove through a group of protesters blocking a street in Times Square. NBC New York's Katherine Creag reports.