Deborah Danner, who had been diagnosed with schizophrenia, was brandishing a bat when Sgt. Hugh Barry shot her

New York City has agreed to pay $2 million to the family of a 66-year-old mentally ill woman who was shot and killed by a police officer inside her bedroom in 2016.

The city's Law Department announced the settlement on Thursday, saying the "agreement is a fair resolution of a tragic case."

Deborah Danner, who had been diagnosed with schizophrenia, was brandishing a bat when Sgt. Hugh Barry shot her.

Officers had been called to Danner's home several times before. Her shooting sparked protests and a rebuke from Democratic Mayor Bill de Blasio.

Barry was later indicted and found not guilty of murder, manslaughter and criminally negligent homicide charges.

The defense argued Barry made a split second decision to protect himself. Prosecutors say he failed to follow his training.

The NYPD sergeant charged with murder and other crimes in the shooting death of a 66-year-old mentally ill Bronx woman he had claimed charged him with a baseball bat in 2016 has been found not guilty on all counts.

In announcing Thursday's verdict in the trial of Sgt. Hugh Barry, who had also been accused of manslaughter and criminally negligent homicide in the death of Deborah Danner,  the judge said the prosecution didn't meet its burden of proof. Barry did not react as he was declared not guilty on all counts, nor did he speak to reporters before slipping through throngs of NYPD supporters on his way out.

The Sergeants Benevolent Association tweeted a statement announcing the verdict "with much joy and relief" and blasted authorities for prosecuting.

A spokesman for the Danner family described them as "devastated." Photos from the courthouse showed relatives with pursed lips gripping each other for stability, holding one another up both physically and emotionally.

Danner was a paranoid schizophrenic who had been hospitalized at least 10 times. On Oct. 18, 2016, Barry, an eight-year department veteran, encountered her naked and armed with scissors in her Castle Hill apartment after responding to a 911 call about a disturbance. He persuaded her to put down the scissors, but as he was coaxing her out of the room, she picked up a baseball bat and charged him, his attorney said at the time. Barry fired two shots, killing her.

Barry's lawyer, Andrew Quinn, said in opening trial arguments Barry fired because Danner was swinging a baseball bat at his head. The New York Times reported, though, that officer Camilo Rosario testified Danner did not swing the bat at Barry before Barry shot her. Other officers who were present testified that Rosario was the only officer who had a clear view of the fatal encounter. 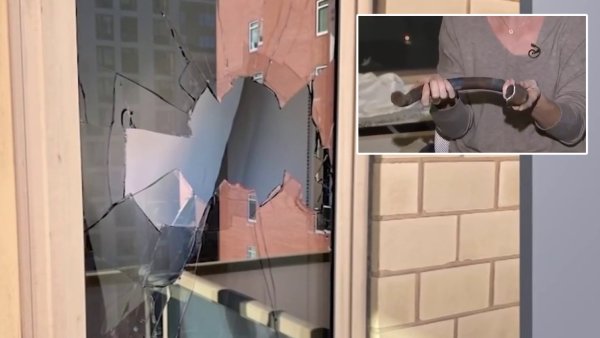 Top city officials, including Mayor de Blasio and Police Commissioner James O'Neill, condemned the shooting at the time. Calling Danner's death a failure of the NYPD, O'Neill said it was clear that some police protocols involving the treatment of mentally ill individuals were not adhered to in Danner's case.

In an emotional press conference in the days after the shooting, de Blasio said officers are supposed to use deadly force only when faced with a dire situation, and, he said, that standard clearly was not met in Danner's case.

After a two-month grand jury investigation, Barry was charged in May 2017 with murder, manslaughter and other charges. Barry was placed on modified duty immediately after the shooting, stripped of his gun and badge. The sergeant joined the NYPD in July 2008. He was promoted in November 2014.

Less than five years before her death, Danner scribed a searing, eloquent essay on living with schizophrenia in which she agonized over the deaths of mentally ill people like her at the hands of police.

"We are all aware of the all too frequent news stories about the mentally ill who come up against law enforcement instead of mental health professionals and end up dead," she wrote in the 2012 piece.

The death of Danner, who was black, at the hands of Barry, who is white, invited comparisons to the 1984 police killing of another black Bronx woman, Eleanor Bumpurs, who was shot after waving a knife at officers.