Mayor Bill de Blasio addressed protesters in the eleventh hour, calling for an end to violence and looting but stopped short of calling for a citywide curfew. Saturday marked the third day of demonstrations against police brutality in the wake of the death of George Floyd, a black man who pleaded for his life as a white police officer in Minneapolis knelt on his neck earlier this week for nearly 9 minutes.

"Peaceful protesters, if you're out tonight... we hear your issues, the need for justice, real change... but now it is time for people to go home. If you went out, you have been heard," de Blasio said just before midnight. "Those who are out there to create violence... we won't tolerate that, you will get arrested tonight."

Protests were planned in all five boroughs Saturday. By 9 p.m., more than six hours into the day's relatively peaceful protests, arrests increased as well as reports of clashes between police and protesters as day turned to night.

The NYPD confirmed at least 345 arrests for the day and 33 cops injured. That brings total arrests to more than 600 since protests erupted Thursday night.

A number of downtown Manhattan businesses, including North Face and Adidas were broken into and looted amidst the evening's protests.

Large groups were still gathered in Brooklyn and Manhattan by 11 p.m., with protesters spotted in Union Square, near the Manhattan Bridge and in Flatbush. A handful of vehicles, the exact number unclear, were on fire near Union Square as protesters continued to clash with officers.

Some 47 police vehicles were damaged in Manhattan and in Brooklyn, NYPD officials said.

Multiple videos, including one shared with NBC New York, appeared to show two police vehicles hit a group of protesters in the Flatbush neighborhood of Brooklyn. The video shows people place a metal barrier in front of a parked police vehicle near Flatbush Avenue and St. Marks Avenue around 8 p.m.

After a second NYPD vehicle pulls up and protesters are seen banging on the car, it accelerates, pushing people in the crowd. The first police vehicle then also accelerates into the crowd, knocking several people to the ground. It was not immediately clear if there were any injuries.

Law enforcement officials say the vehicle was hit with rocks, bottles, and other debris prompting the officers to push through the barrier instead of confronting the protesters outside. Mayor de Blasio called the video troubling on NY1: "I wish the officers hadn’t done that. But I have to be clear, they were being surrounded.”

The mayor's communications director said de Blasio had been in Flatbush for much of the evening "where we've had a tense situation."

There were fewer injuries to NYPD officers Saturday night and those injuries were minor in nature, a senior department spokesperson told NBC News.

Tensions boiled between protesters and police in Brooklyn for much of Saturday. Myles Miller reports.

A short time before, the city's Office of Emergency Management alerted that all Brooklyn-bound lanes of Manhattan were closed at 7:30 p.m. due to protest activity. A large group of protesters walked across the Manhattan-bound lanes, passing cars stopped along the bridge.

Below the bridge, northbound traffic was stopped for almost an hour on FDR Drive at Catherine Slip for a second group of protesters.

The NYPD has told its officers that they should be prepared to come into work whenever and wherever they are needed in the city due to the ongoing protests and events citywide as a precautionary measure.

The memo to all NYPD officers sent within the last 2 hours, and reviewed by NBC News, says "in light of citywide events and the ongoing need to provide extensive police services on a citywide bases, the police commissioner has directed that the duty chart be suspended until further notice."

Chopper 4 was overhead in Flatbush just before 8 p.m. where a NYPD vehicle was seen on fire. At roughly the same time, small garbage fires were spotted near W 14th Street and Fifth Avenue in Manhattan. It was not immediately clear how the fires were set.

Earlier, hundreds joined a Staten Island afternoon rally the Rev. Al Sharpton led to the site where Eric Garner died after being placed in an NYPD police officer's chokehold in 2014.

Sharpton and Garner's mother spoke before a largely peaceful gathering outside the 120th Precinct Saturday about the parallels between the death of Garner and Floyd, whose dying words -- "I can't breathe" -- now echo in protest chants nationwide. Saturday marks the third straight day of New York City protests over Floyd's death and follows a violent night in Brooklyn that saw a Molotov cocktail light an NYPD van ablaze as protesters clashed with police.

In total the NYPD confirmed at least 200 arrests were made Friday night -- including two sisters from upstate New York detained after one threw a Molotov cocktail at a police van -- and multiple cops were believed to have been injured. The woman who threw the Molotov cocktail will face federal charges from prosecutors in Brooklyn, law enforcement source say.

Officers recovered a firearm, bricks, and brace knuckles from protesters they arrested, NYPD Commissioner Shea said. He told NBC News he estimates at least 20 percent of the arrested protestors are from out of town, but suggested that number could be higher.

"It's tough to practice de-escalation when you have a brick being thrown at your head," Shea said, who said a number of officers had teeth knocked out Friday night and others were in the emergency room as of Saturday morning. He described the protest at Foley Square as peaceful while the protest at Barclays Center was "a well planned, orchestrated protest" designed "specifically to cause mayhem."

Two state legislators at the Brooklyn demonstration were pepper-sprayed and one handcuffed, legislative leaders said in a statement.

One protest video that quickly went viral (with nearly 6 million views overnight) showed a large male NYPD officer shoving a smaller female protester with intense force, sending her flying to the ground. The woman told NBC News she was released from the hospital early Saturday with a concussion; the NYPD said the officer is under investigation.

Mayor Bill de Blasio and Gov. Andrew Cuomo announced their request for an expedited, independent review by Attorney General Letitia James of "all actions and procedures that were used last night."

The Civilian Complaint Review Board told NBC New York it received 96 complaints from clashes between cops and protestors Friday night.

At his press conference Saturday morning, de Blasio acknowledged a number of issues at Friday's protest that "we need to address." He emphasized the NYPD's obligation to "find the best possible way to keep peace" while condemning the violent police-protestor clashes.

“Any protester that tries to take the humanity away from a police officer and devalue them just because they are a public servant is no better than the racists who devalue people of color and particularly black men in America," he added.

Hundreds of protesters took to New York City's streets Friday night to demonstrate against police brutality in the wake of a black man's death in Minneapolis, after at least 70 people were arrested in a similar rally Thursday.

Friday's protests came just hours after the police officer seen kneeling on George Floyd's neck was arrested and charged with third-degree murder and manslaughter, Minnesota officials said. According to a criminal complaint, Derek Chauvin kept his knee on Floyd's neck for more than 8 1/2 minutes, including 2 1/2 minutes after Floyd became unresponsive. (Late Friday night, Chauvin's wife said she was leaving him and that she extended her sympathies to the Floyd family.)

Friday marked the second day of protests in New York City over Floyd's death. They began Thursday afternoon, with crowds of people gathering in Union Square chanting refrains against police violence, including "I can't breathe" — the words Floyd said while he was handcuffed and pinned to the ground for almost 10 minutes, the officer's knee on the back of his neck. 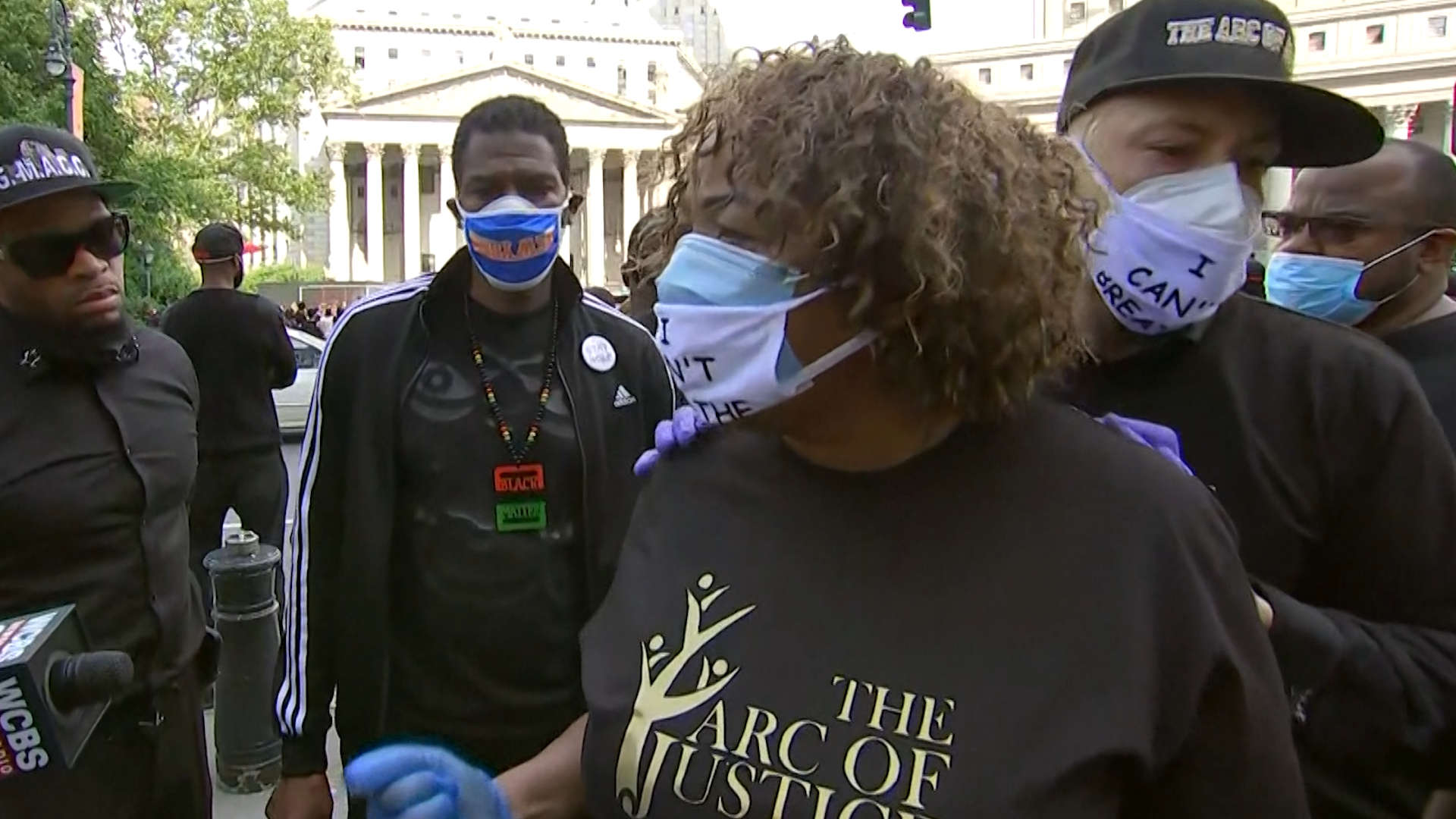 Eric Garner's Mother: ‘It's Like an Echo From the Grave'

"I can't breathe" were also the last words of Eric Garner, who died after being taken down by NYPD officers on Staten Island in 2014. The phrase became a rallying cry after Garner's death.

Protesters say Floyd's killing is reminiscent of Garner and Rodney King, the black man who was violently beaten by Los Angeles police officers. When the cops were acquitted, it sparked riots.

Some protesters in New York City turned to violence on Thursday night, as did many of the marchers across the country. One of the New York City protesters arrested during the hours-long Justice for George Floyd demonstration punched an officer in the face, while another was carrying a knife, officials said. A third person threw a garbage can at an officer, striking him in the head, police said.