The late Friday night memo to the department from Keechant Sewell questioned whether new reforms from Manhattan District Attorney Alvin Bragg would help or hinder in protecting officers, the public and crime victims

In a memo to NYPD employees, the city's newly minted police commissioner raised red flags about criminal justice reforms unveiled by Manhattan's top prosecutor just earlier this week, saying that she has concern over "sweeping edicts" that could dramatically impact policing.

The late Friday night memo to the department from Keechant Sewell questioned whether new reforms from Manhattan District Attorney Alvin Bragg would help or hinder in protecting officers, the public and crime victims.

Bragg issued a response to Sewell's concerns the very next morning, reiterating his mission to keep New Yorkers safe and hold criminals responsible under the law.

"We share Commissioner Sewell's call for frank and productive discussions to reach common ground on our shared mission to deliver safety and justice for all and look forward to the opportunity to clear up some misunderstandings. This conversation, that has already started, is best done directly and not through the media," he said in a statement. 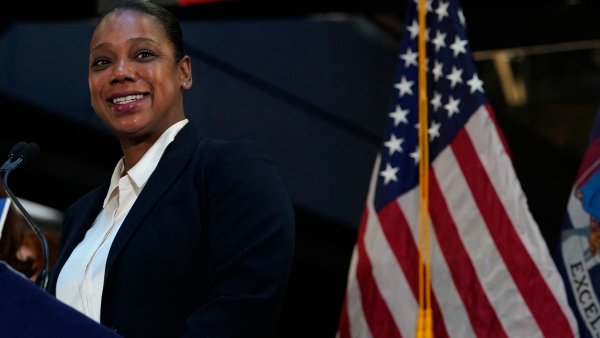 "As you all have likely heard by now, this week, the Manhattan District Attorney made public new policies about what charges the office would decline to prosecute and or downgrade. I have studied these policies and I am very concerned about the implications to your safety as police officers, the safety of the public and justice for the victims," the memo from Sewell read. "I am making my concerns known to the Manhattan District Attorney and hope to have frank and productive discussions to try and reach more common ground."

The commissioner stated in the memo that she has serious concerns the move by Bragg will impact the safety of police officers and the public.

"I believe in criminal justice reform. I believe in reform that make sense when applied collaboratively," Sewell says in the memo. "In that same vein, I am concerned about sweeping edicts that seem to remove discretion, not just from police officers, but also from Assistant District Attorneys regarding what crimes to prosecute and how to charge them."

Sewell also states that the policy sends a message to officers is that there is an unwillingness to protect those who are carrying out their duties. That’s because among the list of crimes the district attorney has told his prosecutors they will no longer prosecute as felonies include resisting arrest, in addition to marijuana misdemeanors, fare evasion, trespassing and prostitution.

After new Manhattan D.A. Alvin Bragg revealed a new plan to limit prosecutions of many nonviolent offenses, reaction came in fast - and in some cases, furious. Andrew Siff reports.

Sewell said that declining to prosecute offenses like resisting arrest or obstruction "injects debate into decisions that would otherwise be uncontroversial," and could lead to violence against officers or hurt the relationship police have with their communities.

"If a person can get away with violating the law, not complying with a police officer’s direction and physically resisting the officer’s attempts to arrest them, what message are we sending? Interactions between officers and the public will needlessly escalate because the incentive to cooperate (i.e. accountability) is entirely eliminated from the equation," Sewell wrote, skeptical of how officers can do their jobs "if individuals are allowed to interfere with impunity."

Bragg’s plan also called for leniency with certain crimes including commercial holdups where threats with a weapon are made but there is no genuine risk of physical harm. Those would be treated as a misdemeanor – like shoplifting — not a felony. Bragg said earlier this week the reforms help serve as alternatives to incarceration, and would allow prosecutors to focus on more serious crimes.

"A gun-point robbery is a gun-point robbery — it should be immaterial to a victim (be it a store owner, minimum wage employee, or a member of the public) that it happened in a commercial establishment as opposed to on the street, and the assailant should face the full consequences of the law," Sewell objected.

Manhattan District Attorney Alvin Bragg says he plans to stop recommending jail time for many crimes -- and other nonviolent misdemeanors won't be prosecuted at all. Jonathan Dienst reports.

Sewell warned of "more open-air drug markets and drug use in Manhattan" as a result of the downgraded drug charges proposed, and a possible uptick in subway violence as a result of doing away with fare evasion prosecution. She also worried that getting rid of pre-trial detention for suspects caught with firearms could put officers' live at risk.

"As Police Commissioner, your safety is my paramount concern. That is one reason I am seeking to have conversations with the District Attorney to seek a better balance between officer safety, public safety and reform," the memo read.

"We can have the justice we deserve, and I believe DA Bragg will be open to engaging in that conversation," Adams said earlier in the week in response to the district attorney's plan.

The announcement comes on the same day the mayor was mired in controversy. He selected a deputy mayor for public safety who in the past was an unindicted coconspirator in a major corruption case. The feds never charged Philip Banks who apologized today for past mistakes but said he looks forward to helping make the city safer in his new role.

Adams also picked his brother, a retired NYPD sergeant, to serve as a deputy commissioner inside the police department.