New York City has laid out a new plan to remove homeless individuals from hotels in places such as the Upper West Side but the plan is creating more pushbacks from residents who support the move and from those who don't.

The city's Department of Homeless Services on Friday said shelter residents in the Lucerne hotel will be moved to "a commercial hotel location" in the Financial District area which be converted to the first-ever traditional shelter in the area. The plan received criticism from a neighborhood group who gathered Sunday with hotel residents to speak out against it.

Corrinne Low of the UWS Open Hearts initiative said Mayor Bill de Blasio's move to displace shelter residents is a form of segregation and that it will slow the path to racial justice and equality.

"Neighborhoods are resources: Neighborhoods are jobs, are community support, are networks, are engines of economic opportunity. And when you exclude a group of people from neighborhoods to keep it for yourself and people who look like you, you ensure resources stay in the hands of the powerful," Low said Sunday.

On the other hand, the West Side Community Organization applauded the mayor's move because the rooms at the Lucerne were always meant to be temporary, to curb the spread of COVID-19.

The neighborhood organization that called for shelter residents in the Lucerne to relocate has said quality of life had been suffering since the city had been housing homeless individuals in hotels due to the pandemic. With tourism all but gone for months earlier in the year, the city opted to use the empty hotel rooms for temporary homeless residences in order to help keep those at-risk people, many of whom suffer from mental illness, addiction and more, safe.

The plan for a new shelter in Wall Street-area is already receiving some potential backlash. A new Facebook group called "Downtown NYCers for Safe Streets" was created shortly following the city's announcement that it will move Lucerne residents to the area.

"We believe that our residents should have been notified in advance of this possibility and now that it has been agreed to without our knowledge, we need to make our voices heard," the group's "About" page read.

Residents at other shelters and hotels like LIC Plaza, Flatlands shelter and Harmonia shelter won't be moved at this time, the city's Department of Homeless Services said. However, the city is slowly planning to move shelter residents from more than 60 hotels.

"We do not anticipate being in a position where Health experts say it is safe to relocate all the individuals experiencing homelessness who we serve back to congregate shelters by October," DSS said in a statement. 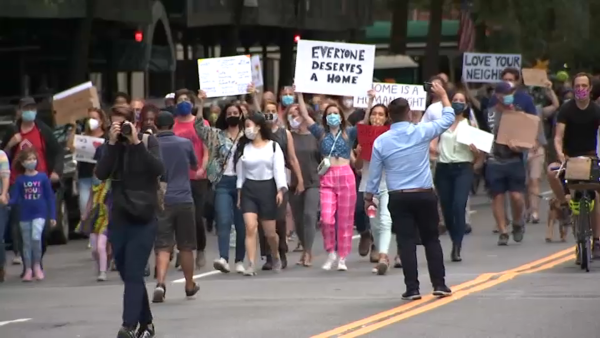