New Yorkers gathered around the city over the weekend to express solidarity with the people of Paris, joining supporters around the U.S. holding vigils and rallies to mourn the victims of the terrorist rampage that left at least 129 dead and more than 350 wounded, 99 of them critically.

At Madison Square Garden on Sunday, fans attending the New York Knicks game rose for a moment of silence as the colors of the French flag were displayed on the court. Further downtown, U.S. Rep. Carolyn Maloney joined a group of French-Americans for a candlelight vigil.

About 100 people attended a rally at Washington Square Park Saturday, where the French flag was displayed at the marble triumphal arch.

At a press conference following the Washington Square Park event, Mayor de Blasio urged New Yorkers to look out for each other.

"If you see something, say something," he said. "That phrase is real. It is powerful."

NYPD Deputy Commissioner John Miller, also appearing at the event, said that the Paris attacks seemed to be indicative of a continued shift by terrorists to low-tech, low-cost and high-impact attacks.

In another show of solidarity with the French people, the Metropolitan Opera sang France's National Anthem before the matinee performance of "Tosca." 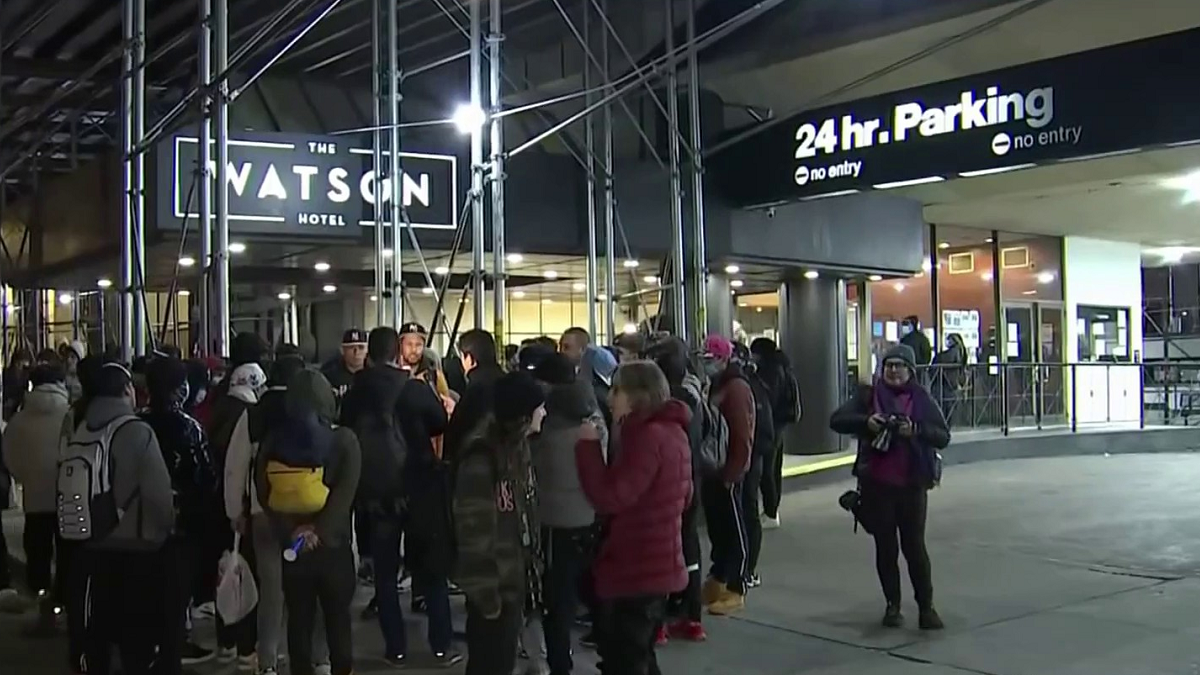 And Saturday evening, mourners gathered outside New York's French Consulate for a candlelight vigil. On Sunday morning, piles of flowers could be seen in front of the building's entrance, as others came by to pay their respects.

On Friday, Gov. Andrew Cuomo directed One World Trade Center to light up in blue, white and red "as we stand in solemn solidarity with the people of France, just as they have done for us in our own times of tragedy," he said in a statement.

"We join them in mourning those who were killed, and in praying for those who were injured or lost loved ones. And we continue to stand side by side with them in our commitment to a free and peaceful world," Cuomo said.

The 408-foot spire on top of the building – constructed after a terror attack leveled the twin towers on September 11, 2011 – was lit up in the colors of the French flag Friday night, and was to remain that way in the nights ahead.

The Empire State Building, meanwhile, went dark at 10 p.m. Friday in sympathy with Paris and remained dark on Saturday.

Other landmarks across the continent glowed blue, white and red Friday night, including San Francisco City Hall, the Omni Hotel in Dallas and Toronto's CN Tower, for decades the tallest freestanding structure in the world.

At New York's Union Square Park Friday night, dozens gathered to hold a candlelight vigil for the victims of the Paris attacks. They gathered in a circle around a sign drawn on the ground, symbolizing both the peace sign and the Eiffel Tower, holding candles and the French flag.

Photos of the vigil were posted to social media with hashtags like #prayers4paris and #newyork4paris.

At the French Consulate on the Upper East Side, workers lowered the French flag outside the building as extra police kept watch. People stopped by to leave flowers; one woman was overcome with tears as she lit a candle to leave on the doorstep.

"First it gripped me. Now I'm angry and saddened and I want to pay homage to the French people, all the lives lost senselessly," said Theresa Thomas, who lives on the Upper East Side.

In Boston, a makeshift memorial for victims was growing outside the French Consulate. Some people left flowers there on Saturday. One man also left a note saying, "We are all France. A grateful USA remembers," according to television reports. A rally of support was scheduled there for Sunday at noon.

De Blasio also released a statement saying: “The people of New York City are heartbroken to see our sister city of Paris shaken again by these thoughtless acts of violence, and we stand in solidarity with the residents of Paris and with (Paris Mayor Anne) Hidalgo during this tragic time."

At least 100 people were killed inside a Paris concert hall called Le Bataclan where an American rock band was playing, and others were killed in shootings and explosions at other sites across the city.

"These were cowardly acts of evil by people who have inexplicably chosen to believe in radical hatred above all else," Cuomo said. "We reject that kind of extremism – choosing instead the bonds of liberty, equality and fraternity that bring us together."