The intense storms hit the area at a time when many were either working or learning from home during the day, the powerful winds interrupting the daily routines established during social distancing

Tree-toppling winds and swamping rains walloped the tri-state area for hours Monday, part of a monstrous storm system that triggered tornadoes in parts of the South and killed more than two dozen people. Tens of thousands locally were left without power into the night.

Conditions were so severe that a tornado watch was issued in parts of New Jersey including Ocean County, where a hurricane-strength 82 mph gust was reported shortly after noon. Potentially damaging winds threatened virtually the entire New York City area, with dozens of reports of trees and wires ripped down, causing widespread power outages. Check the latest severe weather alerts here.

At one point, more than 100,000 customers across the tri-state were without power. As of early Tuesday morning, more than half of those initial outages were still ongoing impacting more than 35,000 in New York, 12,000 in Connecticut and 1,000 in New Jersey.

The storms got more intense as the day wore on, bringing destructive winds, lightning and flooding through the afternoon as a cold front moved through. Thankfully by 6 p.m., the storm had moved on — but the damage was already done.

Wind gusts around 70 mph were reported in New York, New Jersey and Connecticut, including two gusts over 80 mph on the Jersey Shore. Thousands across the tri-state were left without power. NBC New York's Ida Siegal reports.

A large swath of the region faced a high wind warning for most of the day, and was warranted as widespread gusts up to 70 mph were reported. Parts of the Jersey Shore (Lanoka Harbor and Mystic Island) saw winds over 80 mph, while other coastal areas on Long Island and in coastal Connecticut similarly saw some of the highest wind speeds that easily topped 60 and 70 mph.

Parts of the region -- from New Jersey's Bergen County to Brooklyn and Westchester in New York -- saw violent winds down trees by mid-morning as the menacing weather ramped up. Video showed a large tree along a street in Astoria, Queens, that had fallen and smashed several cars below. Another video from Long Island showed a cinder block wall collapsing near workers inside, but thankfully none were hurt.

Dozens of storm reports in the tri-state area came in from the early hours Monday morning throughout the afternoon, the vast majority of which were related to wind damage. The winds dislodged part of the boardwalk in Wildwood and blew the roof off a Sunoco gas station in Egg Harbor Township. Police also reported a partial building collapse in Paterson, though there was no immediate word of any injuries.

Some were worried intense gusts could damage sturdy and well-secured tent structures, raising concerns about the already vulnerable COVID-19 patients being treated in field hospitals across the metro area. Tri-state leaders said their makeshift hospitals were protected, including the one at Central Park where nearly 50 virus patients were being treated as of late Sunday. Five of the Central Park patients were in intensive care, city officials said.

Heavy rain was the primary hazard in the morning; the worst of it moved through the city before pushing through Long Island and Connecticut before noon. Another round of strong storms moved through New Jersey and the NYC-area between 3 p.m. and 5 p.m. Up to 2 inches of rain was expected to fall before the storm system moved out.

Flooding reports started to come in for New Jersey fairly early Monday. In Newark, city officials told residents to avoid at least a dozen streets prone to flooding. The city also advised people to utilize flashlights, not candles, if they lose electricity to reduce the risk of fires.

While obviously roads were less busy than they usually would be, anyone driving the streets dealt with challenging road conditions. The MTA placed a ban on most tractor-trailers across all MTA bridges for most of the afternoon. In Dutchess County, New York State Police said the winds were vicious enough to blow a tractor-trailer off Interstate 84.

The National Weather Service and New York City's Office of Emergency Management strongly advised people to heed the stay-at-home guidance already in place because of coronavirus. If you have to go outside, avoid being in areas around trees and branches. If you have a multi-level home, remain in the lower levels during the peak winds, the National Weather Service says.

New Jersey shut down most of its drive-up COVID-19 testing sites as the risk of heavy winds grew; Connecticut closed some as well. New York City said its testing at "hospital-adjacent facilities" would move inside hospitals if the weather situation warrants, while some in Suffolk County -- in Riverhead, Brentwood and Huntington Station -- closed ahead of the storm. Stony Brook University also said Sunday it would suspend COVID-19 testing on its campus.

The showers and storms moved out by nightfall and clouds will briefly break up Tuesday, which should feature cooler temps in the high 50s. A chance of showers returns Wednesday as temperatures plunge into the 40s. The mercury rebounds slightly to end the week, but it's expected to stay below normal through Sunday.

The same storm system that bore down on the Northeast was blamed for more than two dozen deaths in Mississippi, Georgia, South Carolina and Tennessee on Easter Sunday. Three-quarters of a million people were without power in a 10-state swath from Texas to West Virginia by sunrise Monday, according to poweroutages.us.

Severe storms swept Mississippi, Louisiana and Alabama on Sunday, destroying houses and cars on a day where many families expected to celebrate Easter. Forecasters say the severe weather threat could last for several more days. 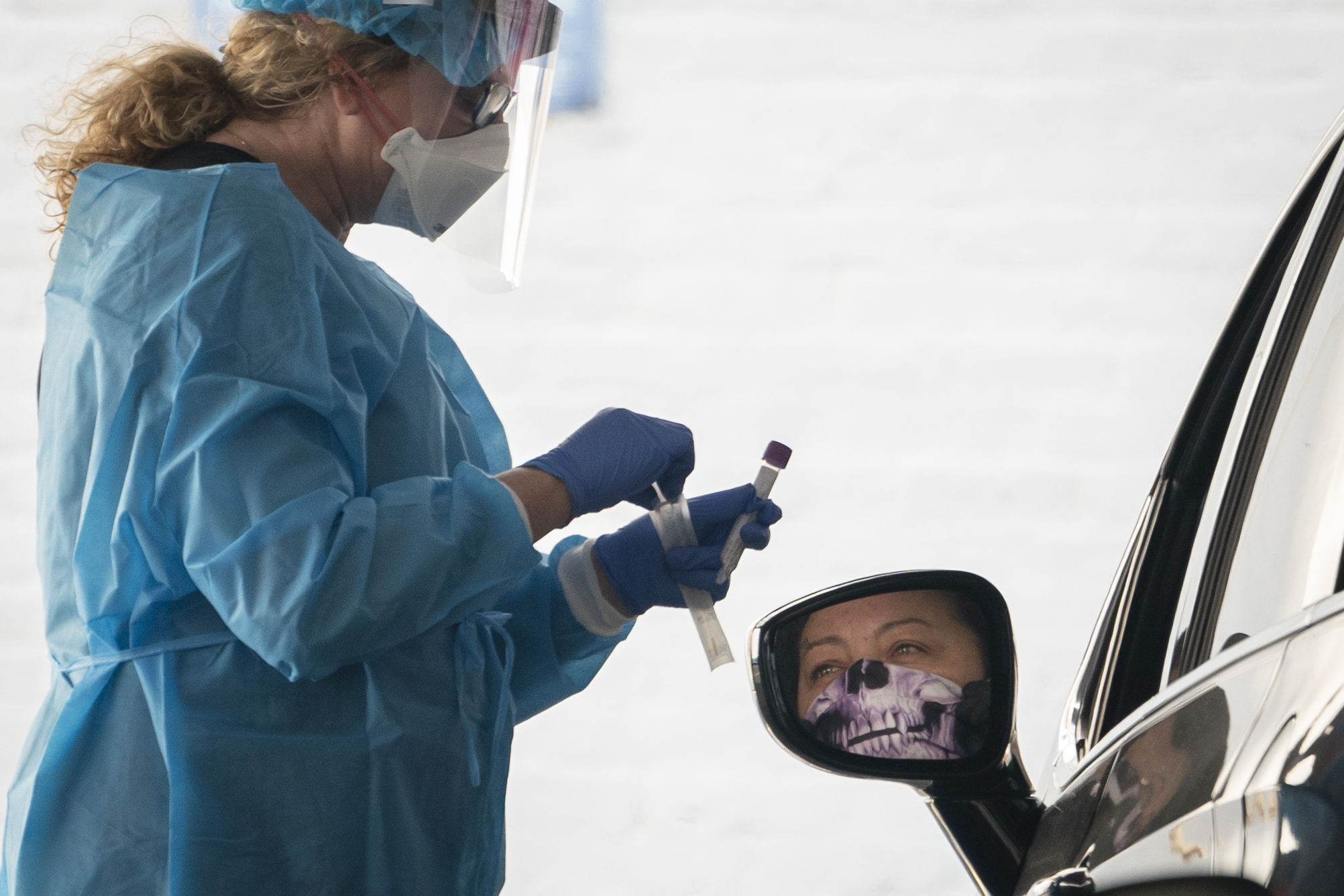 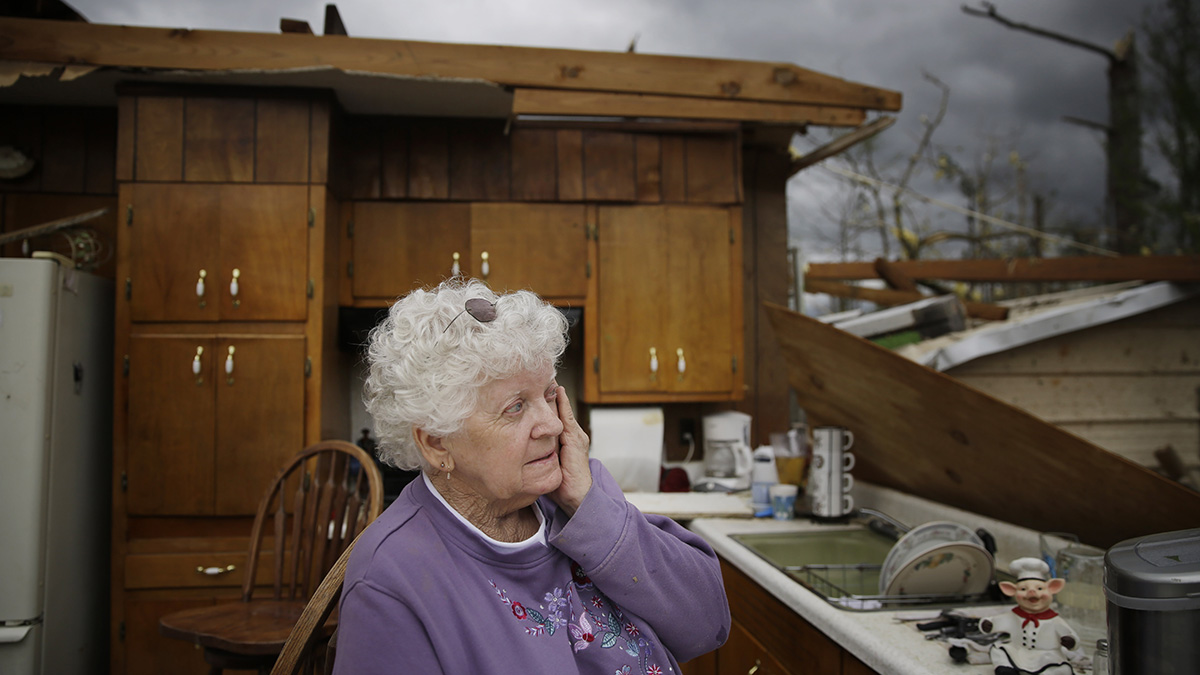 Storms Tears Through South Amid Pandemic; At Least 30 Dead