The mayor, a former cop himself, was set to address the city on Monday afternoon after four officers were shot, one fatally, in as many days

After a violent 72-hour period that saw four NYPD officers shot in the line of duty, one fatally, Mayor Eric Adams addressed the city on Monday to outline what he called "precision prevention" plans to combat gun violence.

"We are going to do a lot more than pray. We are going to turn our pain into purpose," Adams said in remarks from City Hall, promising New Yorkers would see his proposed changes on the street quickly. "We will not surrender our city to the violent few.”

Among other changes, Adams said the NYPD would launch new neighborhood safety teams focused on gun violence in the next three weeks, targeting 30 precincts where the mayor said 80 percent of violence takes place. He also promised an expansion of the Gun Violence Suppression Division, the NYPD unit that goes after gun traffickers.

"Gun violence is a public health crisis. There's no time to wait. We must act. The sea of violence comes from many rivers. We must dam every river that feeds this greater crisis," Mayor Eric Adams said Monday.

"We will have boots on the ground on every block in this city," the mayor said. "New Yorkers feel as if a sea of violence is engulfing our city. But as your mayor, I promise you I will not let this happen. We will not surrender our city to the violent few."

Adams announced the city’s police department would increase cooperation with state and federal law enforcement to stem the flow of illegal guns into the city and would work to have officers conduct spot checks for weapons at entry points into the city such at bus and train stations.

The mayor wants the police department to use new technology to identify people carrying weapons, including facial recognition technology. Adams' plan also called for expanding cash rewards for tipsters who share information on gun-related crimes and for the city to help businesses pay to install surveillance cameras, including cameras that point toward the street. In return, the city will rely on those businesses to share footage with police should a crime occur.

The mayor even plans to rely on pastors and other faith leaders for a coordinated public safety message delivered via sermons to their congregations.

Adams said he would be seeking more for resources for mental health care and said he will focus on appointing city judges who have a “demonstrated commitment” to keeping criminals who use guns off the city streets. It is not immediately clear what that demonstration would involve.

"The sea of violence comes from many rivers. We must dam every river that feeds this greater crisis," Adams said.

Adams also promised an expansion of summer youth programs, more aid for young adults aging out of the foster care system, and a push for "community hiring" legislation that would mandate more local jobs.

Read "The Blueprint to End Gun Violence" below or click here to open the 15-page document in a new window.

But the mayor acknowledged the city can't fix the problem without legislative help from Albany. He called on the state to close loopholes that protect older teens with guns from being charged in criminal court, and for stricter penalties for gun trafficking.

On the state end, Assembly Speaker Carl Heastie cheered Adams' call to address the gun problem, and suggested that pretrial services regarding probation be improved.

"I appreciate Mayor Adams is addressing the scourge of gun violence that has been plaguing our communities, which has long been my focus, and his recognition of all the factors that are contributing to this epidemic both here in New York and across the country," Heastie said in a statement. "As the important discussion of public safety continues, one area he can take immediate action is to review and improve pretrial services in the probation department which he oversees. This is critical to ensuring the goals of the Raise the Age initiative are realized."

On the flip side, a police union said Heastie's response to the Adams proposals don't go far enough, as the detectives union said it "should have included a commitment to roll back laws which put long term violent offenders back on the street almost immediately after we arrest them. But it didn't. What will it take for politicians to understand what must be done?"

NYC Council Speaker Adrienne Adams stopped shot of embracing Adams' plan for a new gun unit, but said the council can "appreciate the mayor's focus on the epidemic of violence our city faces and the need for multiple solutions," while also welcoming the plans to strengthen "community-based violence prevention programs, mental health care and investments in you employment."

However, the speaker's statement questioned whether bringing back the controversial police unit would be best.

"Concerns have been raised in communities about the plan clothes unit's ability to reduce violence, given its past history of initiating undue violence," the statement read. "This proposal — along with other to change city and state criminal justice policies — requires further public dialogue and transparency."

While some items that Adams proposed will require City Council approval, many of them can move forward without it.

Public defenders in the city called elements of Adams' plan "punitive," saying the city "should not roll back the clock."

"We do not support Mayor Adams' focus on discredited punitive and surveillance-based strategies, including his call for additional rollbacks to bail and discovery reform, amendments to Raise the Age, increased use of facial recognition and reinstatement of the NYPD's historically racist Anti-Crime Unit," the group of public defenders said.

Officer Jason Rivera, 22, was shot and killed Friday night in a Harlem apartment while responding to a call from a woman reporting a domestic incident with her adult son. Another responding officer, Wilbert Mora, 27, was critically injured and remains hospitalized. In another incident last Thursday on Staten Island, an officer underwent surgery after being shot in the leg while serving a search warrant for drugs, while on Tuesday last week another officer was shot in the leg while scuffling with a teenage suspect in the Bronx.

Speaking from outside Harlem Hospital on Friday night, Adams, a retired NYPD captain, called on the federal government to help the city go after those are who are trafficking guns, "constantly carving highways of death, destroying our communities."

"It is our city against the killers," an emotional NYC Mayor Eric Adams - himself a retired cop - said Friday night after an NYPD officer's murder.

In the three weeks since Adams took office, the city has seen more violent crime than over the same time period last year; shooting incidents are up 16% and felony assaults up 8%, for example.

In addition to last week's officer shootings, a 19-year-old cashier was shot to death as she worked a late-night shift at a Burger King, a baby was critically injured by a stray bullet while in a parked car with her mother, and on Jan. 1, an off-duty NYPD officer was shot and injured while sleeping inside his car, resting between shifts at a police precinct in East Harlem. A woman was also pushed to her death on the tracks at the Times Square subway station. 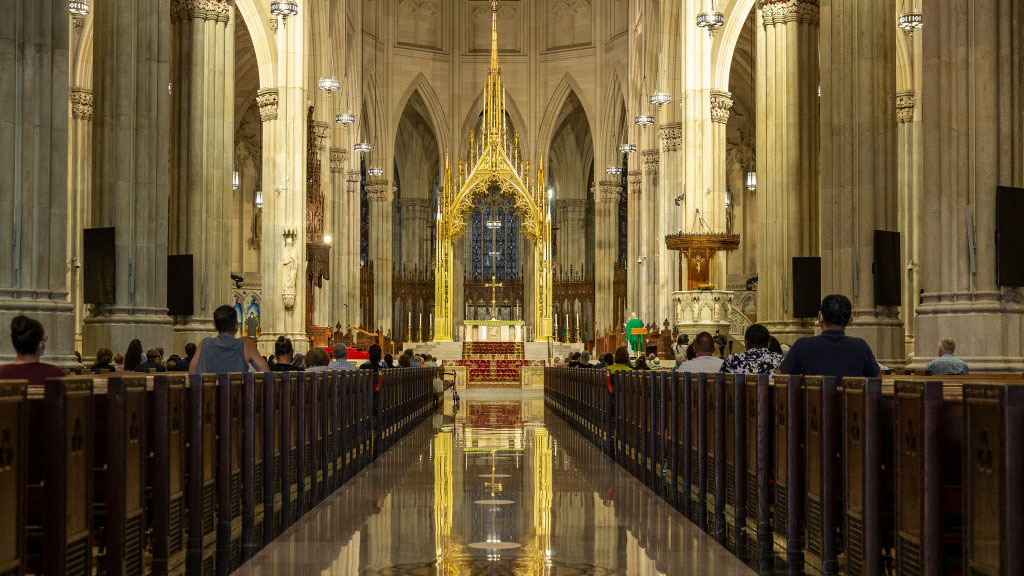 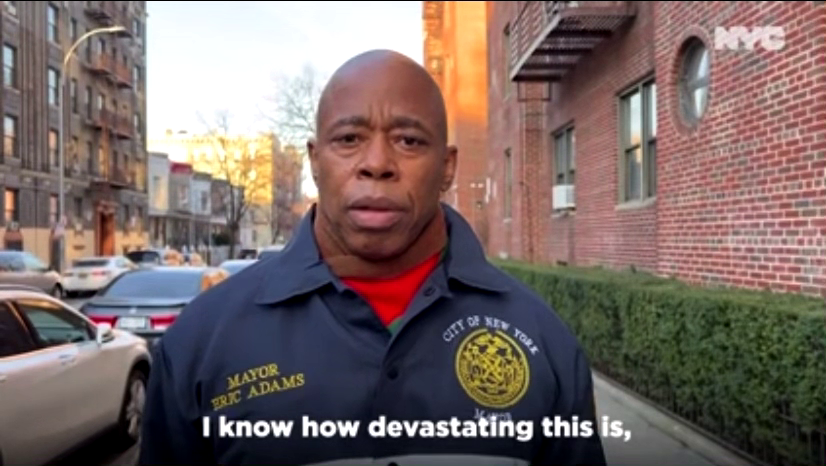 During a Sunday morning appearance on CNN, Adams stressed the urgency “to deal with the underlying issues that are impacting crime in our city and has become a stain on the inner cities across our country.”

By most statistical measures, New York City has been afflicted in recent months by about the same level of crime it experienced in the early 2000s throughout the mayoralty of Michael Bloomberg.

But a startling string of violent crimes early in Adams’ administration could give him a mandate to strengthen a police department that, just 18 months ago, was fighting off calls to “defund the police.” It might also embolden those who want to roll back criminal justice reforms that some law enforcement officials claim is eroding hard-won declines in shootings and murders.

Adams was elected last year after pledging to be tougher on crime than some of his fellow Democrats. But he started his first day as mayor by calling 911 to report a fight near a subway station and admitted after the deadly Times Square assault that even he doesn’t feel safe taking the subway.

Nevertheless, the recent spate of violence has led to renewed calls from city officials and union leaders to revisit bail reform measures that took effect just a few months before the pandemic. There is little evidence that people spared from jail are responsible for the bulk of new crimes, but it's among the areas Adams wants to tackle in his plan to try to end gun violence.

The mayor doesn’t want to do away entirely with bail reforms that took effect in January 2020, but he wants the law tweaked so that judges can consider a defendant’s criminal history and potential dangerousness in setting bail. New York is the only state that doesn’t allow that, Adams said.

Among the most controversial parts of Adams' plan calls for bringing back an anti-crime unit in the police department that was disbanded amid police reform discussions two years ago. The unit was dissolved in 2020 amid concerns that it was responsible for a disproportionate number of shootings and complaints against officers.

Adams said the reincarnation of the anti-crime units will be accompanied by the city holding listening tours in neighborhoods and extra training, and officers will wear some clothing that identifies them as police, such as windbreakers.