Juan Orlando Hernandez was extradited last month on charges that he received millions of dollars from 2004 to 2022 to support a drug trade that delivered hundreds of thousands of kilograms of drugs to the U.S.

"We’re going to subpoena El Chapo," said defense attorney Raymond Colon. "If the judge orders it, the government will have to produce him. We’ll hear what he has to say."

El Chapo is currently serving a life sentence in a U.S prison for a massive conspiracy that utilized killings and corruption to support drug trafficking for over two decades. 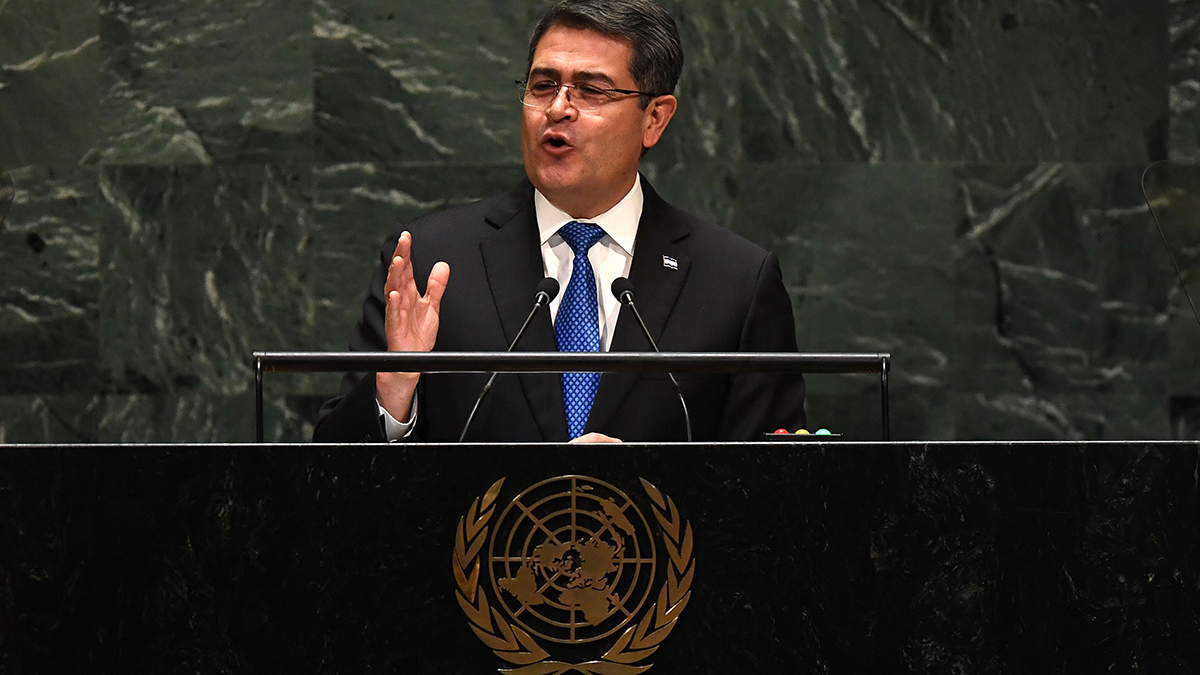 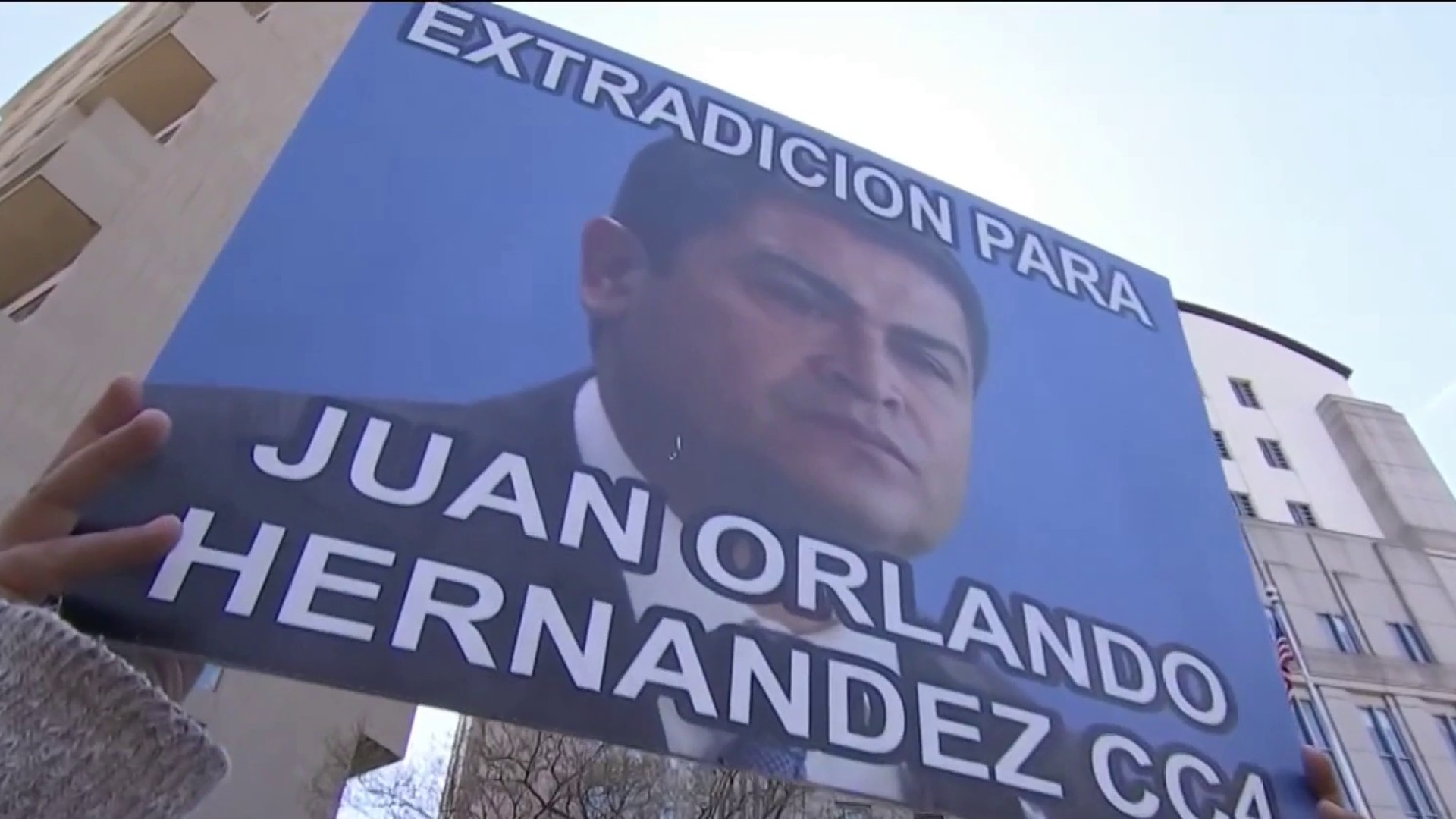 Colon said Hernandez denied taking millions in payoffs from El Chapo and other murderous drug kingpins in exchange for helping them transport large amounts of drugs through Honduras to the U.S. He said he expected El Chapo would verify that claim, if he were able to get him to testify.

Hernandez pleaded not guilty in federal court in Manhattan. Wearing a blue jailhouse uniform, Hernandez said in Spanish, ”Not guilty your honor” during Tuesday’s hearing before Judge P. Kevin Castel.

Hernandez was extradited to New York on April 21 on the drug trafficking-related charges. Drug Enforcement Administration agents said while publicly promising to help the U.S. fight drug trafficking, privately he was working closely with the cartels.

After Tuesday’s hearing, defense attorney Colon said he would try to subpoena other long-shot witnesses – like former Presidents Trump and Obama as well as former top U.S. security officials like John Kelly and Mike Pompeo.

Colon told reporters outside the Manhattan federal courthouse that in addition to Obama and Trump, he plans to subpoena President Joe Biden. He said Biden and Obama, both Democrats, along with Trump, a Republican, could vouch for Hernandez. The lawyer said the presidents could testify that they considered Hernandez an ally after he became the first Honduran president to agree to the extradition of drug traffickers from Honduras to the U.S.

“He sent many away who made threats against him and his family as a result of that,” Colon said.

Hernandez also kept U.S. agencies including the CIA and Drug Enforcement Agency informed about what was happening in his country, in a give-and-take that may have been reflected in a briefing Hernandez received in 2017 from U.S. officials in Langley, Virginia, where the CIA is headquartered, the lawyer said.

As for subpoenaing Biden, Obama and Trump, Colon said: “Why not? Biden may be busy running the country, but I can’t think of anything that Trump is doing that’s important and I know that Mr. Obama is retired, so ....”

He said his goal would be to show Hernandez for years cooperated with U.S. officials and that he had been "set-up" by traffickers.

“All these individuals that are now gonna testify against my client – only figured out our way out of life sentences – let’s testify against this president,” Colon said.

Hernandez is being held in the Metropolitan Detention Center in Brooklyn without bail pending trial. Judge Castel said he expects the trial to start in January.

Colon complained to the judge that his client was being treated like "a prisoner of war." He alleged Hernandez – a high-profile and security-risk prisoner – had only been allowed out of his cell once to exercise in the 20 days he has been held. According to Colon, Hernandez is sometimes allowed to exercise on a basketball court for one hour, but isn’t given a basketball.

Colon added Hernandez has been unable to communicate with his family in Honduras or receive access to the jail’s commissary — and that even his own legal team has had difficulty getting into the MDC to see Hernandez. The judge asked prosecutors to look into what difficulties there might be and to help quickly correct them.

“We’re not asking for him to get special treatment because he is a former head of state, but these conditions are psychologically debilitating,” Colon said.

The lawyer said Hernandez has been isolated in a wing of the jail and treated as if he was a terrorism or violent defendant.

“He’s not a terrorist,” Colon said. “There’s no violence in his history.”

Prosecutors said Hernandez worked with major traffickers and received millions of dollars from 2004 to 2022 to support a drug trade that delivered hundreds of thousands of kilograms of drugs to the U.S. In court Tuesday, they said evidence includes wiretap recordings, evidence from Hernandez’s cell phones and other electronics in addition to cooperating witnesses.

Charges against Hernandez, who served as president of Honduras from 2014 into 2022, include conspiracy to import drugs and conspiracy to use firearms. Honduran authorities have alleged Hernandez used some in the military to help the cartels – including the alleged killing of rivals and informants.

The next court hearing is set for September.