One person died in the shooting; at least two others were wounded, officials have said

A four-hour manhunt for the suspect in Tuesday's deadly shooting at a Long Island Stop & Shop ended when authorities saw the 31-year-old alleged gunman on surveillance video trying to leave a building not far from the crime scene and swooped in, investigators said Wednesday.

Gabriel DeWitt Wilson was taken into custody without incident at an apartment building on Terrace Avenue less than 1.5 miles from the crime scene on Cherry Valley Avenue, officials said.

He now faces charges of murder and attempted murder in the grocery store shooting that killed Ray Wishropp, 49, and wounded two other people -- a 50-year-old man who was shot multiple times in the shoulder and grazed in the cheek, as well as a 26-year-old woman who was also shot in the shoulder. 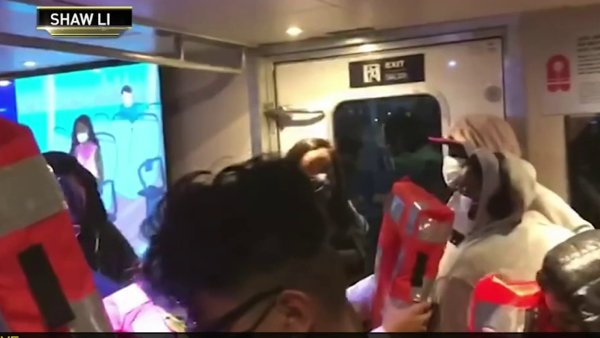 Both of the wounded are recovering.

Police say a man who killed a manager and wounded two workers Tuesday at a Long Island grocery store was a “troubled employee” who’d been reprimanded in recent months for threatening and sexually harassing colleagues.

Wilson was arraigned Wednesday, remanded and will appear in court Friday. A not guilty plea was issued on his behalf. If convicted he faces 25 years to life in prison, according to the district attorney's office.

News 4 New York reached out to Brian Carmody, Wilson's attorney, who told us he spoke to his client briefly before his arraignment. Carmody said that Wilson was shot in the head at 19 and is still dealing with the lingering effects of that injury.

"It's truly remarkable that the arrest of an armed suspect who was inside an apartment building that was full of civilians was taken down, arrested without incident, without further violence," Nassau County District Attorney Madeline Singas said.

Nassau County cops, along with County Executive Laura Curran, shared more details about Wilson's background Wednesday. He has prior assault and weapons arrests in Maryland, where he lived before moving to New York, dating back to 2006. He was shot in the head in Maryland in 2014 after a gun battle and was charged with second-degree attempted murder in that case, the outcome of which wasn't made immediately clear on Wednesday.

Wilson appeared to have been living on Long Island since at least 2016. Nassau County officials said cops twice in three years responded to calls about a mental health crisis involving him -- in 2016 and in 2019.

Authorities haven't publicly speculated on a possible motive in the deadly grocery store attack. No information has been released on whether Wilson may have specifically targeted the victims, who were shot in an upstairs office. Their names haven't been released.

Authorities said Wilson, who family and fellow employee said was a shopping cart wrangler at the store, went to the office area immediately after arriving for work on Tuesday and shot the two survivors before going down the hall to shoot the store manager. In total he shot his handgun seven times at five different people, according to police, who also added they do not know if the weapon was legally possessed. The weapon has not been recovered.

"Apparently, he just walked into the office, trying to ask for his job back. The manager told him no and it went from there," said Joseph Moran, a witness whose mother works at the grocery store.

Wilson was allegedly brought in and spoken to by managers about behavior about a month ago. On Tuesday, prior to shooting, police say Wilson went into the store, talked to the manager about transferring to another location. This talk was described as uneventful, however, 40 minutes later, he returned to the building and opened fire, police said.

Another witness, Barbara Butterman, said she heard four to five gunshots and everyone started running. At the time of the shooting, there were about a “couple hundred” shoppers inside the store, Nassau County Police Commissioner Patrick Ryder said.

Wilson then fled the scene and witnesses reported seeing him run off with a small handgun after the gun attack, police said. Nassau County's police commissioner said that tips from people who knew Wilson, in addition to surveillance video, helped track the suspect. NBC New York obtained surveillance video showing what appeared to be Wilson walking on a Hempstead sidewalk after the shooting.

He allegedly tried to escape on a bus, according to police reports, but he was later found after a four-hour search, found on Terrance Avenue in Hempstead, about a seven-minute drive from the store. (Here's everything we know about Wilson right now.)

The uncle of Wilson News 4 spoke with described his nephew as a good kid who could be a "hothead."

Meanwhile, the family of Wishropp came together to grieve on Wednesday. A longtime friend said the father of seven had a big heart, willing to do whatever he could to help others. Family members were seen at his home in Valley Stream Wednesday, devastated over the loss.

"We are mourning the loss of someone very, very important to our family and we appreciate all the support and comfort," said Alex Bernard, a cousing of Wishropp's. "You always see these things on the news and you say your heart goes out to people. But when it hits home that it was your family member, it hurts."

“I’m praying for the victims, and my heart breaks for their families and loved ones,” Cuomo said in a statement.

Three people were shot at a Stop & Shop grocery store in West Hempstead on Tuesday, law enforcement sources tell News 4, and the suspect in the attack was still at large.
Copyright NBC New York/Associated Press