Members of Notorious MS-13 Gang Indicted in Killings of Teenage Best Friends, 5 Others

The seven slayings covered by the indictments include the deaths of Nisa Mickens and Kayla Cuevas, teenage best friends whose bodies were found feet apart in Brentwood last year

By Greg Cergol and Joe Valiquette and Jennifer Millman • Published at 8:56 am on March 2, 2017

By Greg Cergol and Joe Valiquette and Jennifer Millman • Published at 8:56 am on March 2, 2017

More than a dozen alleged MS-13 gang members are named in federal indictments charging them with murder and other crimes in connection with the gruesome slayings of seven people, including two teenage best friends, in the crime-plagued town of Brentwood, prosecutors announced Thursday.

The FBI and Suffolk police carried out joint raids at multiple locations known to be connected to the notorious El Salvadorian MS-13 gang Thursday morning and arrested four of the named defendants. A total of 13, 10 of whom are undocumented immigrants, face charges, according to U.S. Attorney for the Eastern District of New York Robert Capers, who announced the indictments at an afternoon news briefing.

The indictments include charges of murder, conspiracy, racketeering and other crimes in the deaths of seven people in the small Long Island community, including teenage best friends Nisa Mickens and Kayla Cuevas.

Mickens' brutally beaten body was found on a tree-lined street in Brentwood Sept. 13, a day before her 16th birthday. A day later, the beaten body of Cuevas, her lifelong friend, was discovered in the wooded backyard of a nearby home. Investigators had suspected the young girls -- best friends with a passion for basketball -- were victims of gang violence. Though several MS-13 gang members were previously arrested in connection with the probe, none had been charged with the killings until Thursday.

Capers said that four gang members had been looking for a rival gang member to attack or kill when they spotted the girls. They recognized Cuevas from a prior altercation with MS-13 members, called their "leader" and got approval to kill her and her friend, Capers said. The girls died by "swinging baseball bats and machetes," Capers said, adding Cuevas ran for her life.

Suffolk Police Commissioner Timothy Sini, who took over as the county's top cop a little more than a year ago, acknowledged the gravity of the girls' loss in a statement Thursday.

"Although we are keenly aware that nothing will ever undo the heartbreaking loss of Nisa and Kayla, we can take solace in the fact that their savage murderers will be held accountable," Sini said.

The bodies of Mickens and Cuevas were found during a terrifying six-week period for the community, during which police also discovered the remains of Oscar Acosta, 19, Miguel Garcia-Moran, 15, and 18-year-old Jose Pena-Hernandez. All five were students at Brentwood High School. Acosta and Garcia-Moran had been missing for several months before their bodies were found near Long Island Rail Road tracks Sept. 26. Pena-Hernandez, who was found dead in early October, was a known MS-13 member, officials said.

According to Capers, gang members believed he was cooperating with law enforcement and lured him to a wooded area near Pilgrim Psychiatric Center and repeatedly stabbed him until he died.

MS-13 members Elmer Alexander Lopez, 19, German Cruz, 18, one juvenile and two other fugitives who remain at large are accused of murdering Pena-Hernandez. Most of the defendants charged in the deaths of Mickens, Cuevas and Pena-Hernandez face life in prison or the death penalty if convicted. 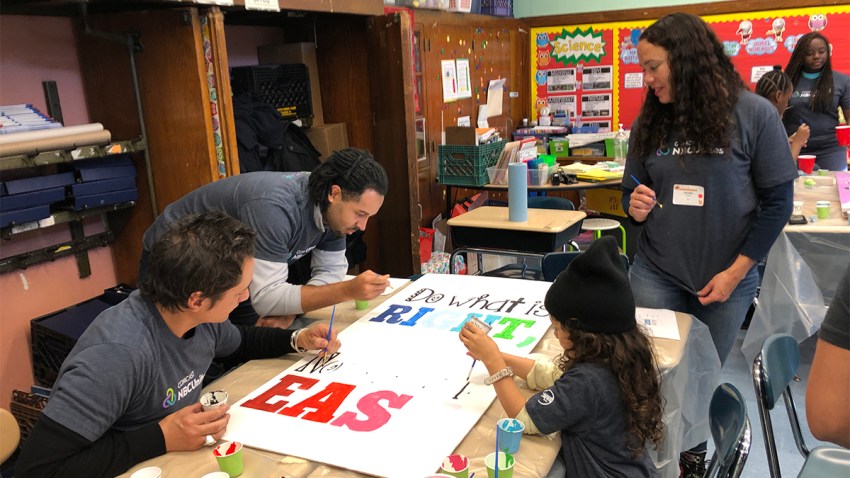 In Photos: Celebrating MLK Jr.’s Legacy Through a Day of Service

The deaths of Acosta and Garcia-Moran are not covered by Thursday's indictments, though investigators have said they believe they too were felled by gangs. Their killings remain unsolved. In addition to the Mickens, Cuevas and Pena-Hernandez cases, the indictment includes murder charges in the 2013 deaths of Derrick Mayes and Keenan Russell, the 2014 killing of Jose Lainez-Murcia and the 2015 slaying of Jonathan Cardona-Hernandez.

Gang violence has been a problem in Brentwood and some surrounding Long Island towns for more than a decade, but Suffolk County police and the FBI began pouring resources into a crackdown after the killings of the high school girls sparked outrage.

Some people complained that police, school officials and others were not doing enough to stem the violence. Since then, police have arrested or re-arrested more than 120 MS-13 members on a variety of charges as part of a larger takedown, though none had been charged with the students' killings. Many of the suspects were in the state and federal system already.

Sini said the latest arrests are not the end of the investigation into MS-13, but a milestone in the department's continuing effort to eradicate gang violence.

"We have promised to eradicate MS13 from our streets and we remain fully committed to finishing the job," Sini said. "We will continue to keep the pressure on this ruthless gang and anyone who associates with them, and we will spare no resource to accomplish our objective."

The gang, also called Mara Salvatrucha, is believed to have been founded as a neighborhood street gang in Los Angeles in the mid-1980s by immigrants fleeing a civil war in El Salvador. It grew after some members were deported, helping to turn that country into one of the most violent places in the world.

It is now a major international criminal enterprise with tens of thousands of members in several Central American countries and many U.S. states, including a heavy presence on Long Island, where its members have been blamed for at least 30 killings since 2010, in Queens and in parts of northern New Jersey.

"As the MS-13 continues its efforts to expand and entrench itself in our communities, both by sending gang members to illegally enter the United States from Central America, and by recruiting new members from our schools and neighborhoods, this Office and the FBI’s Long Island Gang Task Force will continue our mission to dismantle the MS-13 and free our neighborhoods from the terror they cause," Capers said in a statement.

"Since 2003, the FBI’s Long Island Gang Task Force has been combining the resources of our agents and detectives who, although they are from different agencies, work together in carrying out one mission: to protect the right to live in a society free from violence," Sweeney said in a statement. "Whether you live in Brentwood or the Hamptons, you have a right to safety and security in your neighborhood.