Jason Rivera's funeral will be held at St. Patrick's Cathedral

The funeral for slain NYPD Officer Jason Rivera will be this Friday at St. Patrick's Cathedral, as his colleague Wilbert Mora clings to life after being shot in Harlem Friday evening while responding to a domestic violence call.

After officers arrived, they went to a rear bedroom, where McNeil fired multiple times as they approached the door. The man then tried to run from the apartment, but was confronted by the third officer, who shot him twice.

The gun battle left Officer Jason Rivera, 22, dead. According to multiple senior officials with direct knowledge of the investigation, the accused shooter, McNeil, has a history of increasingly rabid belief in anti-government conspiracy theories. Officials are also looking into the possibility that McNeil continued firing after the officers were down, and before he charged down a hallway and was shot himself. 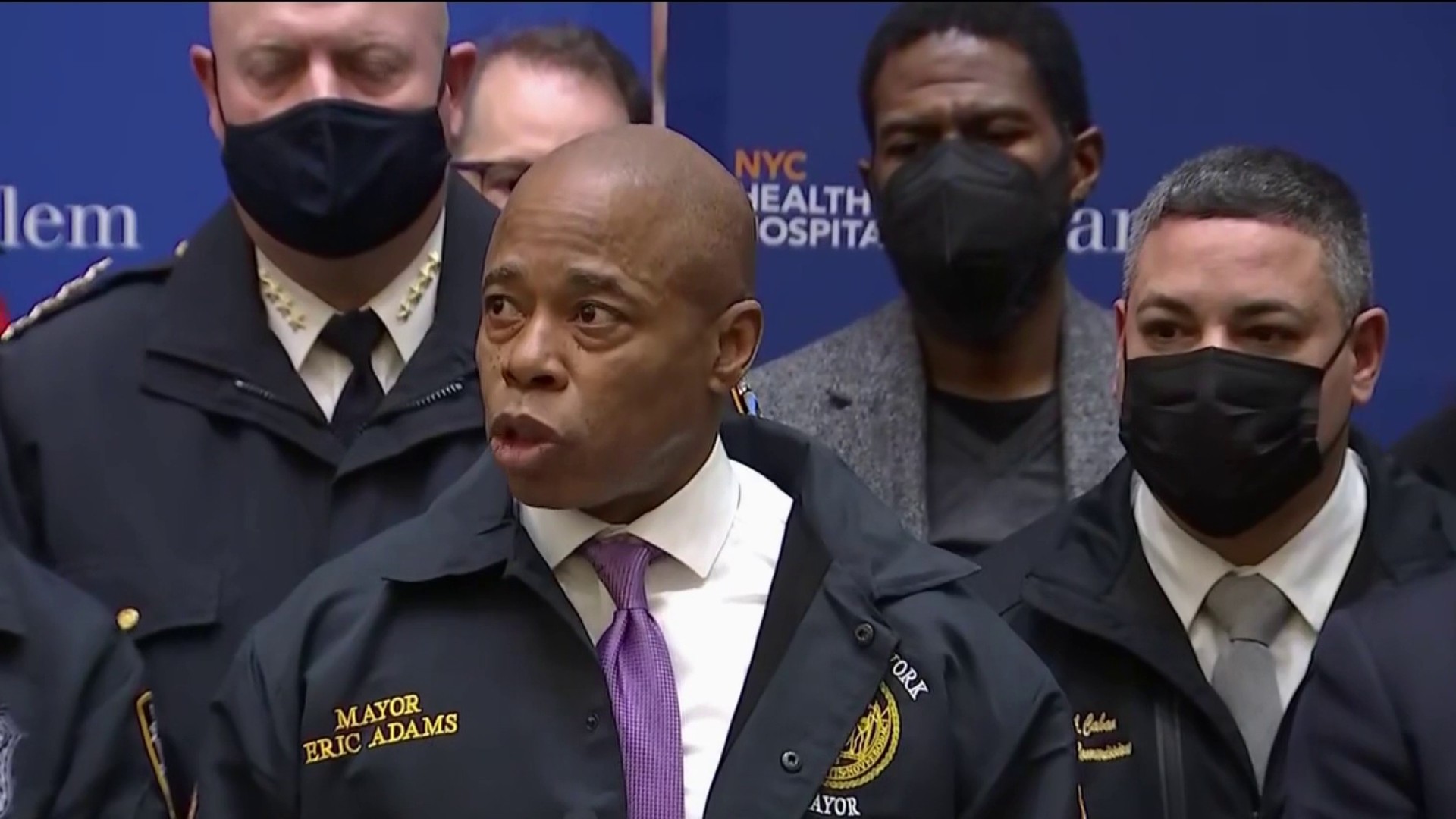 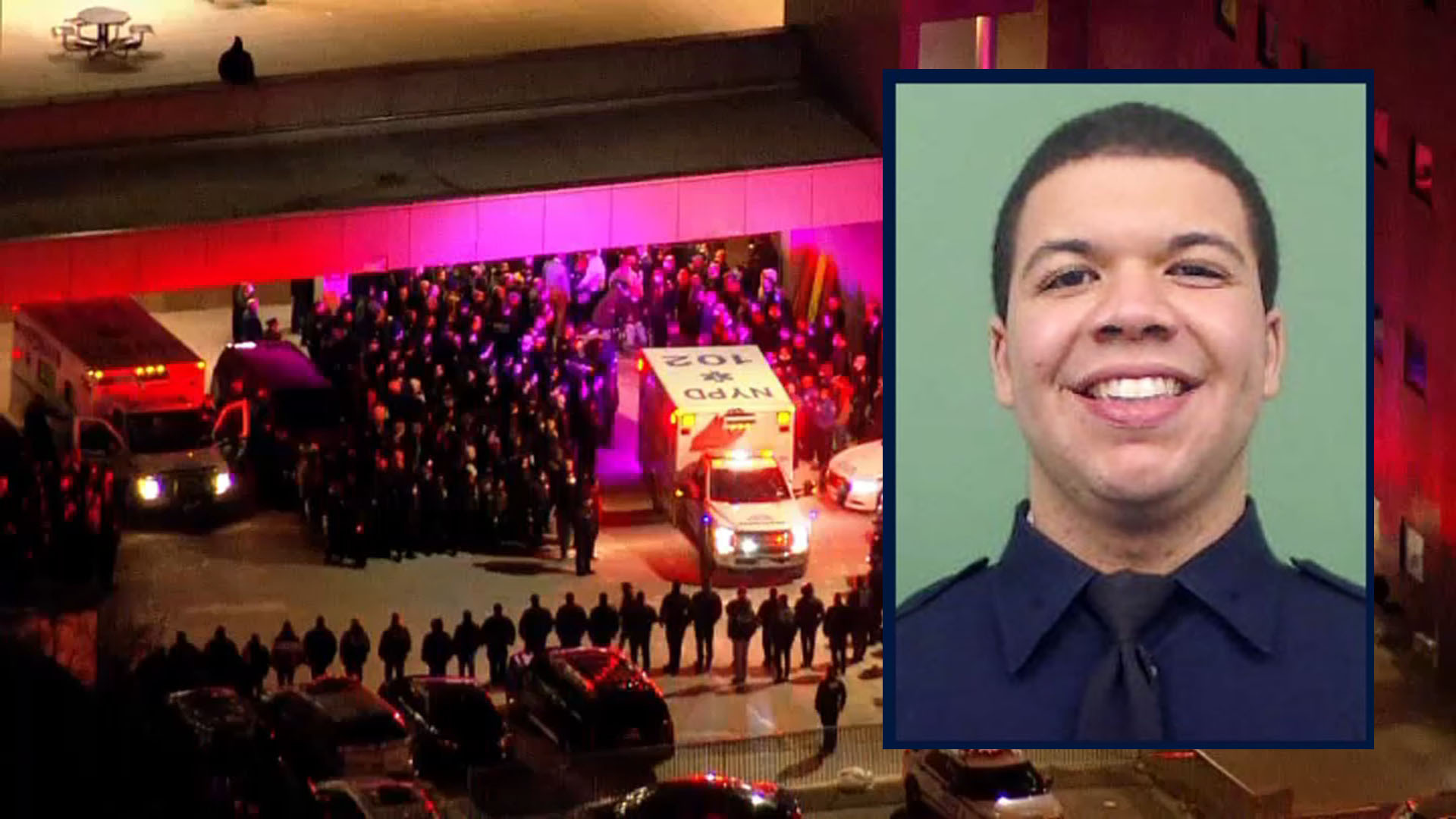 The call for a domestic disturbance came in around 6:15 p.m. from an apartment on West 135th Street between Malcolm X Boulevard and Adam Clayton Powell Jr. Boulevard, near Harlem Hospital.

According to a senior NYPD official with direct knowledge of the investigation, McNeil had been living with his mother since November, after she brought him to New York from Baltimore to help her with another child who was unwell.

McNeil has a history of paranoia and was involved in anti-government groups in Maryland, officials familiar with the investigation said. That embrace of conspiracy theories only deepened once he moved to Harlem, the officials said, and he tried to convert others in his family to his point of view.

Three responding officers spoke with the mother who called regarding a fight she had with her son, according to police. According to the official, the fight was strictly verbal and not physical in nature, and would not likely have led to anything more than a written report.

McNeil's mother and the other son briefly talked with officers in the front of the one-bedroom apartment, police said.

Two officers were then heading to the back bedroom to speak with Lashawn McNeil, while the third stayed with the two family members in the front of the apartment, according to police.

The bedroom was located down a long, narrow hallway, about 30 feet from the front living room where the officers entered, police said. As the officers approached, the door swung open and the suspect, McNeil, opened fire. According to the senior NYPD official, McNeil's mother told him last year not to bring guns to her home, and has claimed to authorities she did not know he had the murder weapon in her apartment.

It was unclear how many shots were fired, but both officers were struck. Jason Rivera was ultimately killed, Wilbert Mora critically injured.

As McNeil tried to run from the apartment, he encountered the third officer, who police sources said is a rookie in the NYPD. The officer fired two rounds, striking McNeil in the right arm and head. The third officer was not shot.

"The three officers who arrived arrived at that scene were doing their job. They came to answer a call for service every single day. They were listening to a mother who called needing help for her son," NYPD Commissioner Keechant Sewell said. "As officers were compassionately trying to provide aid to a 47-year-old man, he suddenly, without warning, opened fire on them. In a moment, a young, 22-year-old life was ended, and another, forever altered."

A Glock .45 — with an extended magazine that holds up to 40 additional rounds — was recovered at the scene. Police said the gun was stolen in Baltimore in 2017.

The NYPD said the Bureau of Alcohol, Tobacco and Firearms/NYPD Joint Firearms Task Force is helping in the investigation into how the gunman obtained and brought the weapons to New York City. The ATF/NYPD Crime Gun Intelligence Center is leading efforts to track all gun intelligence leads.

The entire deadly incident was captured on police officers' body camera, a senior law enforcement official said. Police said that it was still an active crime scene, and that an investigation is ongoing. NYPD Chief of Detectives James Essig said that anyone who has information regarding the shooting should contact the 32nd detectives' squad, or call CrimeStoppers.

In the aftermath of the shooting, New York Attorney General Letitia James issued a statement saying "as we await the facts, my office may assert jurisdiction in this matter."

Lashawn McNeil: What We Know About Gunman

The man who allegedly pulled the trigger, killing one officer and leaving another critically injured, has a few minor arrests in his past across three states.

Lashawn McNeil, of Allentown, Pennsylvania, was arrested for narcotics in New York City in 2003, for which he was still on probation.

He also has four arrests outside of NYC. McNeil was arrested in South Carolina for unlawful possession of a weapon in 1998.

The rest of his arrests have taken place in Pennsylvania. He was arrested for assaulting a police officer there in 2002, and in 2003 he was nabbed on a felony drug charge as well as a misdemeanor narcotics charge.

It was not immediately clear why McNeil was at the apartment, or if he had been staying there. He remains in critical condition at Harlem Hospital.

NYPD Commissioner Keechant Sewell, who as been on the job for just three weeks and has already had four police shooting incidents in that time, said that she was "struggling to find words to express the tragedy we are enduring."

"Tonight, a 22-year-old son, husband, officer and friend was killed because he did what we asked him to do," Sewell said at a press conference at Harlem Hospital. "We are in mourning and we are angry."

Sewell told the scores of cops who were at the hospital that "our department is hurting, our city is hurting. It is beyond comprehension. I am not sure what words, if any, will carry the weight of this moment, and what we are feeling."

Sewell also asked for prayers for the officers' families, whose pain is "not something anyone can put into words."

Rivera's body was transported from the hospital later Friday evening to the medical examiner's office, given a full escort by a long line of police vehicles. Fellow officers lined the streets to bid farewell to their fallen comrade. His funeral is expected to be held at St. Patrick's Cathedral this week.

It was the third incident in less than 72 hours involving NYPD officers getting shot in the line of duty, and brings the number of cops shot to four, following incidents in the Bronx late Tuesday night and another officer shot early Thursday morning on Staten Island.

The officer in the Bronx, who was shot in the leg while scuffling with a teenage suspect, has already been released from the hospital. The officer who was shot in the leg while serving a search warrant for drugs in Staten Island underwent surgery at the hospital, where he was recovering. He was said to be in stable condition, but his injury was serious.

There was also an off-duty officer who was shot while sleeping inside his car, resting between shifts at a police precinct in East Harlem on Jan. 1.

"We have four times this month rushed to the scene of NYPD officers shot by violent criminals in possession of deadly, illegal guns. Five officers shot, one fighting for his life ... and now tonight, one is dead," Sewell said.

Mayor Adams made an impassioned speech at the hospital, saying that those committing the acts of violence cannot be allowed to divide the city, but rather that "we must save this city together." He called on the federal government to help go the city after those are who are trafficking guns, "constantly carving highways of death, destroying our communities."

In talking to the officers, Adams had a simple message: Don't give up on the city.

"No matter how painful this is, don't give up on the people of this city. Don't feel like they don't want you to do your job ... They want you here to do your job," the mayor said. "Let's protect the people of this city, and not allow anger to get in our way of protecting those who are living with this violence every day. We are going to protect our city, that is our promise and commitment."

Police Benevolent Association President Pat Lynch got emotional as he called on the public to show support for the police in the wake of the shooting.

"Our hearts are broken, our knees are buckling and we are angry because we have been here before and it happened again," he said.

Friday's fatal incident marked the first time an NYPD officer had been gunned down in the line of duty since Detective Brian Mulkeen was shot killed Sept. 29, 2019. Mulkeen was patrolling the streets around a city apartment complex in the Bronx as part of a unit investigating potential gang activity, when he and his partner tried to apprehend a man who had fled questioning, and a struggle ensued.

The situation escalated from there, as the seven-year veteran of the force fired his gun five times at the man they had chased down, Antonio Williams. Mulkeen’s partner then drew his weapon as well before both Williams and Mulkeen are killed in the gunfire. Police said a total of six plainclothes officers fired 15 shots when they responded to the call, with Mulkeen being killed as a result of friendly fire to his head and torso, the medical examiner later ruled.