The 27-year-old New Jersey man, an officer with U.S. Customs and Border Protection, was arrested Saturday for illegally possessing a gun on the grounds of the Capitol

A federal law enforcement officer was arrested carrying a gun at Saturday’s rally at the U.S. Capitol -- billed to support the suspects charged in January’s insurrection -- but will not be prosecuted.

The 27-year-old New Jersey man is an officer with U.S. Customs and Border Protection. He was arrested by Capitol Police for illegally possessing a gun on the grounds of the Capitol after people in the crowd reported seeing him with a handgun and notified nearby officers.

The rally was organized by a former Donald Trump staffer to show support for those who participated in the Jan. 6 Capitol insurrection.

His arrest and presence at the event were surprising because the rally was billed as an event to support those who have been charged in January’s riot. That riot left dozens of police officers beaten, bloodied and bruised as the crowd of pro-Trump rioters, some armed with pipes, bats and bear spray, charged into the Capitol, quickly overrunning the overwhelmed police force.

During January's riot, one officer was beaten and shocked with a stun gun repeatedly until he had a heart attack; another was foaming at the mouth and screaming for help as rioters crushed him between two doors and bashed him in the head with his own weapon.

Multiple federal departments knew groups were coming to Washington on Jan. 6 to protest the election results and some officials even feared violence. Lauren White from CREW talks about records that show what officials were saying in the days leading up to the riot and attack on the U.S. Capitol.

Law enforcement officials had prepared extensively for the possibility that Saturday’s rally could devolve into violence — bringing back the fence around the Capitol, activating the city’s entire police force and requesting assistance from the National Guard — taking no chance as they aimed to avoid a repeat of the Jan. 6 attack. Police had also warned they would come down hard on anyone who violated Washington’s gun laws.

But there were very few incidents on Saturday and only a handful of arrests. Four people were arrested, including the Customs and Border Protection officer.

The FBI released new footage of the suspect who placed two pipe bombs near the RNC and DNC headquarters ahead of the Capitol Riot.

Generally, under federal law, law enforcement officers are given reciprocity to legally carry their weapons in other states, even those with restrictive gun laws. But the law has an exemption for government property or military bases where it is illegal to carry a gun, like the U.S. Capitol.

A spokesman for the U.S. attorney’s office in Washington said prosecutors were “not moving forward with charges” but did not provide additional information about the decision.

Two law enforcement officials said the officer was not at the rally in any official capacity. The officials could not discuss the matter publicly and spoke to the AP on condition of anonymity. The Department of Homeland Security’s inspector general was also notified of his arrest.

U.S. Customs and Border Protection said it was aware of the arrest and was “fully cooperating with the investigation." 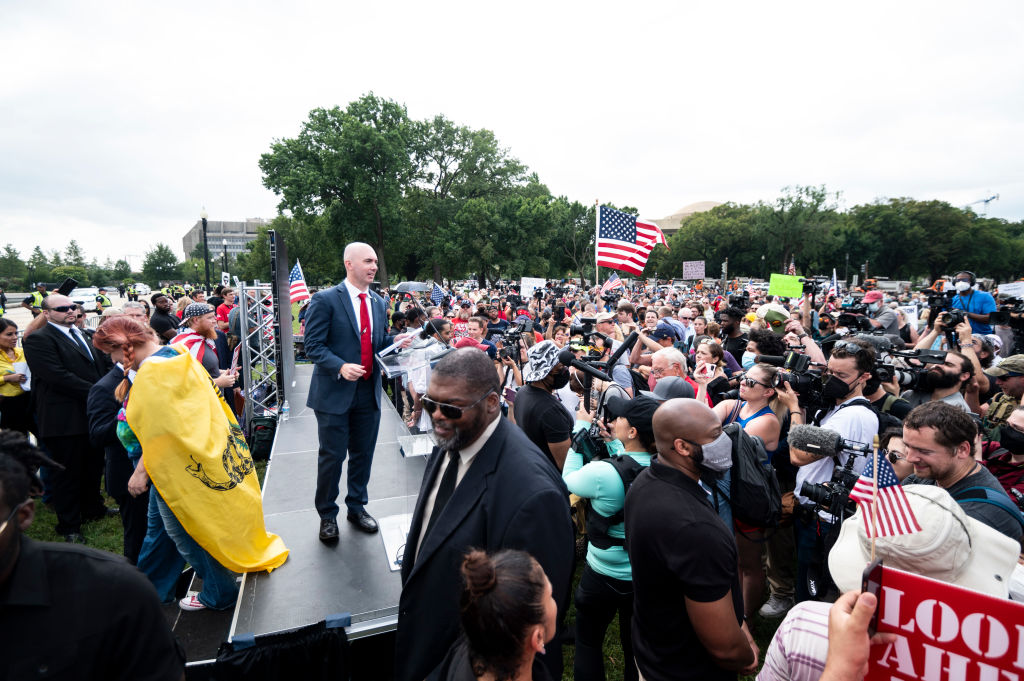 “CBP stresses honor and integrity in every aspect of our mission and expects officers to adhere to the oath they take to uphold the laws of this country,” the agency said in a statement.