Webster faces six counts, including assaulting, resisting or impeding an officer using a dangerous weapon. He isn’t accused of entering the Capitol on Jan. 6

Body camera video captured a "rage-filled" retired police officer attacking one of the outnumbered police officers trying to hold off a mob of rioters who stormed the U.S. Capitol, a federal prosecutor told jurors Tuesday.

But a defense attorney said another video from a different angle shows that former New York City police officer Thomas Webster acted in self-defense after a Metropolitan Police Department officer punched him first.

Jurors saw both videos at the start of Webster's trial, the first among dozens of cases in which a defendant is charged with assaulting police at the Capitol on Jan. 6, 2021. 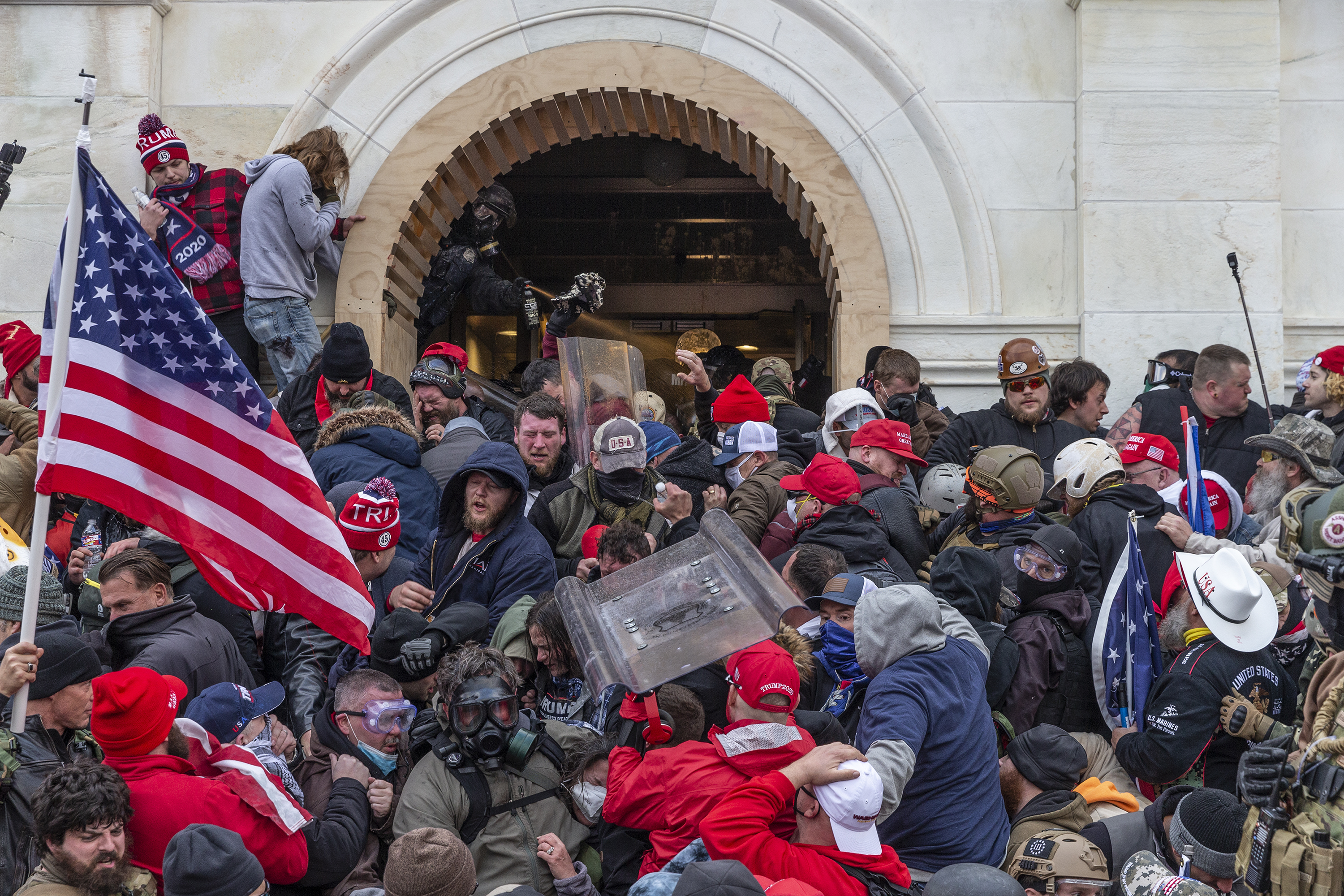 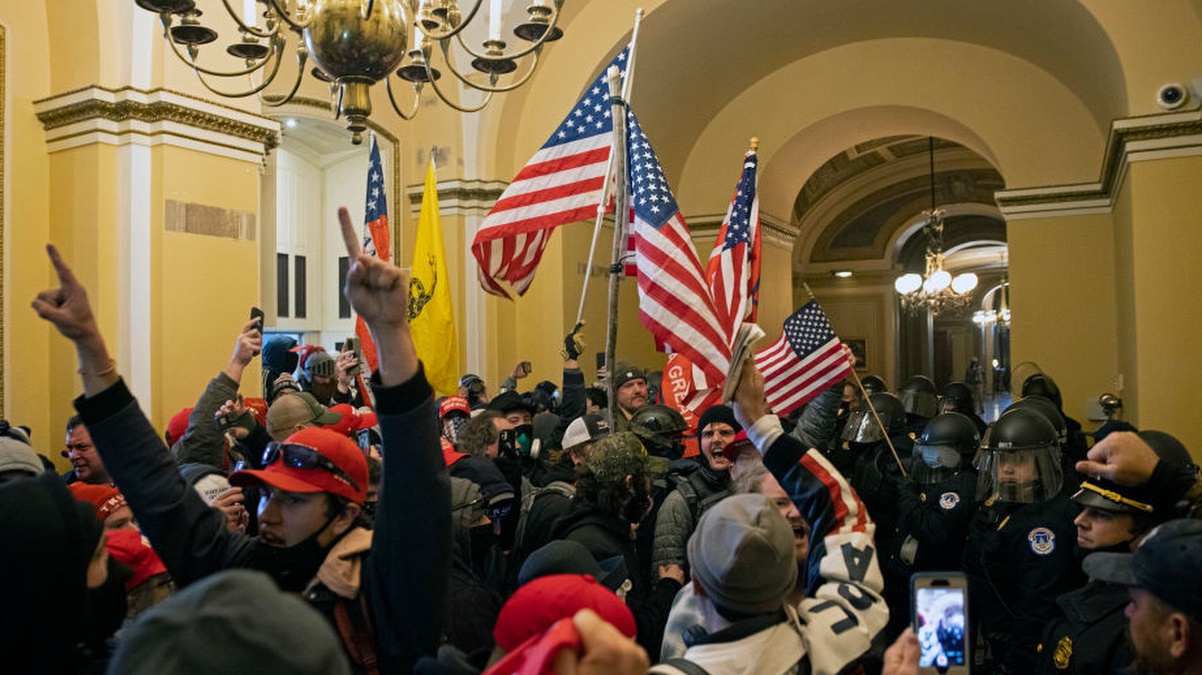 Assistant U.S. Attorney Hava Mirell also showed jurors a photo of Webster holding a U.S. Marine Corps flag on a metal pole in front of the Washington monument before the riot erupted.

“He is smiling in that photo, but that smile would soon turn to rage,” she said during the trial’s opening statements.

The prosecutor told jurors they will hear testimony from Noah Rathbun, the officer whom Webster is charged with assaulting with the flag pole.

Webster shoved a bike rack at Rathbun before swinging the flag pole at the officer in a downward chopping motion, striking a metal barricade in front of the officer, according to Mirell. After Rathbun grabbed the broken pole and retreated, Webster “hunkered down,” charged at the officer and tackled him to the ground, where Rathbun began to choke from the chin strap on his gas mask, the prosecutor said.

Defense attorney James Monroe accused Rathbun of using excessive force and provoking Webster by punching him in the face.

“The government didn't tell you about that,” Monroe told jurors.

Mirell said Rathbun stuck out an open palm to create space between him and Webster.

“But the defendant kept getting angrier and angrier,” she added.

U.S. District Judge Amit Mehta, who is presiding over Webster’s trial, said during a bond hearing last June that he didn't see Webster getting punched in the face on a video. The judge described Webster as an instigator.

“It was his conduct that sort of broke the dam, at least in that area,” Mehta said, according to a transcript.

Webster, now a self-employed landscaper, retired from the NYPD in 2011 after 20 years of service. He served in the Marine Corps in 1985, from 1989 before joining the NYPD in 1991. His department service included a stint on then-Mayor Michael Bloomberg’s private security detail.

Webster brought a gun when he traveled alone to Washington from his home in Florida, New York, a village in Orange County about 70 miles northwest of New York City. He wore his NYPD-issued bulletproof vest but says he left the pistol in his hotel room when he headed to the Jan. 6 rally where Trump spoke.

The former NYPD officer, who at one time guarded City Hall and Gracie Mansion, allegedly attacked a Capitol police officer with an metal pole. The other man, a Queens GOP activist, was said to have climbed through a broken window at the Capitol and held a megaphone. NBC New York's Jonathan Dienst reports.

Webster faces six counts, including assaulting, resisting or impeding an officer using a dangerous weapon. He isn’t accused of entering the Capitol on Jan. 6.

“In his mind, this is a protest. He's not taking over any Capitol,” Monroe said. “He's there to have his voice heard.”

Monroe also has argued that Webster was exercising his First Amendment free speech rights when he shouted profanities at police that day. The defense lawyer suggested that Webster became upset because he saw others in the crowd who were injured and bleeding.

Webster's trial in the fourth before a jury and the sixth overall. The first three Capitol riot defendants to get a jury trial were convicted of all charges in their respective indictments.

In a pair of bench trials, a different federal judge heard testimony without a jury before acquitting one defendant and partially acquitting another.

Jurors convicted two rioters of interfering with officers. One of the rioters, Thomas Robertson, was an off-duty police officer from Rocky Mount, Virginia. The other, Texas resident Guy Wesley Reffitt, also was convicted of storming the Capitol with a holstered handgun.

The third Capitol rioter to be convicted by a jury was Dustin Byron Thompson, an Ohio man who said he was following then-President Donald Trump’s orders.