Carmine's has altered its story of what happened on Sept. 16, providing more details with new surveillance video

Protesters blocked the door of a Manhattan restaurant and urged customers to stop dining and leave, as new video of the incident and comments from the attorney for the group at the center of the controversy come to light.

About 30 to 40 protesters were outside of Carmine's on the Upper West Side Monday evening, saying what happened on Sept. 16 was not simply a group of unvaccinated people upset about being turned away from enjoying a meal inside — but rather was about restaurant customers responding to a hostess using racial slurs.

According to police, three women punched the Carmine's hostess repeatedly and broke her necklace, leaving the 24-year-old bruised and scratched after a dispute arose over the city's newly introduced vaccine mandate for restaurants and other businesses. She was taken to a hospital and later released. 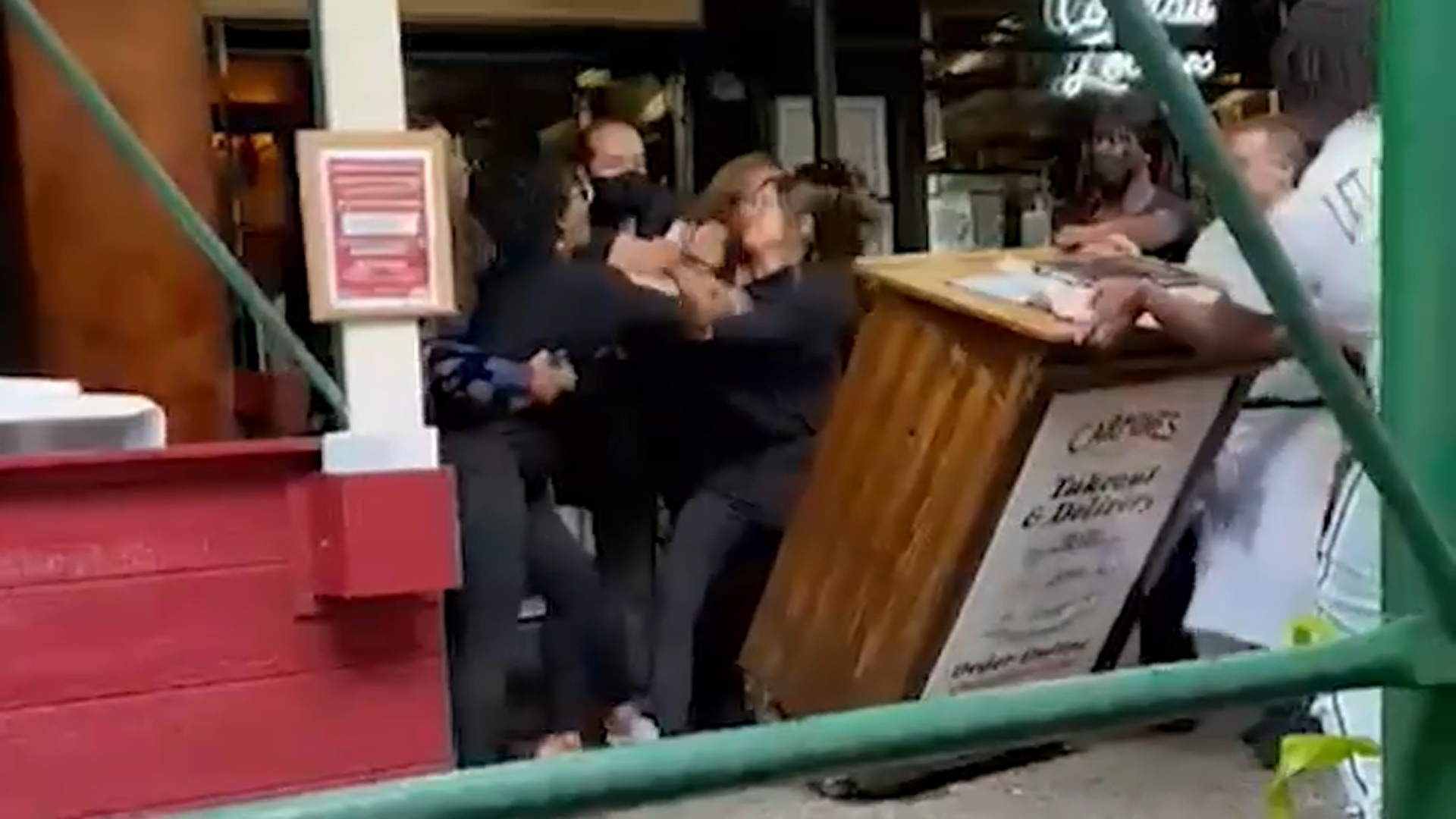 Justin Moore, the attorney for the group of women from Houston, Texas, said that his clients are in fact vaccinated and provided the necessary proof of that. But the fight was never about that, and started only after a woman started shouting racial slurs, Moore said.

"The epithet was the N-word and one of the women was called a monkey by this hostess," Moore said.

"After she dropped the N-bomb, the three women did a double take and followed her out the restaurant, and that's the melee you saw," said Hawk Newsome of Black Lives Matter New York.

Moore said that the notion the fight was started over vaccination status is "completely false and that narrative has been used to criminalize these women and try to help Carmine's and this hostess save face in the light of their bad acts."

The same hostess stand at Carmine's on the Upper West Side where a group from Texas attacked a 22-year-old hostess asking to see proof of COVID vaccination is now under additional protection. NBC New York's Jessica Cunnington reports.

Carmine's has altered its story of what happened as well, providing more details with new surveillance video. The restaurant now says that the three women did show their vaccine cards, as did a second part of their party, and all were escorted inside to sit at a table.

But a third group that was also part of the party did not show any proof of vaccination, and as a result were not allowed in, Carmine's said. The restaurant said the women came back outside in an effort to convince the managers to let their friends in.

At this point, the surveillance video shows the hostess — an Asian woman who appears agitated — who was later hit. A coworker can be seen on video ushering her away, and a short time later the vaccinated members of the party reenter the restaurant, passing the hostess briefly.

The women appear to get triggered by something that happened or was said, and turn suddenly to run back outside where they confront the hostess from behind, and the fight ensues.

"Let's believe the Black woman, you know why? Because I'm a Black woman and that happens," said Caroline Gonve, founder of the Black Women's March.

The video has no audio, so it won't help answer what the hostess may or may not have said to the group of women in that moment in the hallway. There were no other witnesses there other than the hostess and the women.

Carmine's said that the women never mentioned racial slurs in their complaints at the time, and said in a statement that the group of women is having their lawyer "falsely and grossly misrepresent their acts of wanton violence in a cynical attempt to try to excuse the inexcusable."

The restaurant maintains that the brawl was "entirely unprovoked ... because none of our hosts — all of whom are people of people — ever uttered such a slur."

But protesters at the restaurant on Monday still believed the hostess should be fired.

The Houston women face charges of misdemeanor assault and criminal mischief and are scheduled to appear in court Oct. 5.

New York City’s rule requiring proof of vaccination for indoor restaurant dining, gyms and entertainment venues has been in effect since Aug. 17 but only began being enforced on Sept. 13.