Bridgeport's mayor said Saturday he had nothing to do with what federal prosecutors describe as a corrupt process that led to the appointment of Armando Perez as the police chief of Connecticut's largest city.

Perez, who served on the force for nearly four decades, and David Dunn, the city's acting personnel director, both resigned after being charged Thursday with wire fraud, conspiracy to commit wire fraud and with making false statements to investigators.

They are accused of rigging the chief's exam in 2018 that led to Perez getting the job.

The 25-page federal complaint includes an allegation that Dunn told a member of the panel interviewing candidates that Bridgeport Mayor Joe Ganim wanted Perez “in the top three” — the list of finalists from which the mayor chose the chief.

Along with Bridgeport's personnel director, he's accused of rigging the process that got him the job. News 4 Chief Investigative Reporter Jonathan Dienst reports.

Ganim, speaking by phone to The Associated Press on Saturday, denied he influenced the selection of the candidates for chief in any way.

“I never had any contact with anybody in the process until I got three names and what I did was by charter,” Ganim said.

The complaint did not allege any involvement in the scheme by Ganim, who returned to office in 2015 after serving nearly seven years in prison for corruption. He was convicted of steering city contracts in exchange for private gifts during his first tenure as Bridgeport mayor, from 1991 until his resignation in 2003.

He was released from prison in 2010 and elected mayor again after apologizing and asking residents for a second chance. 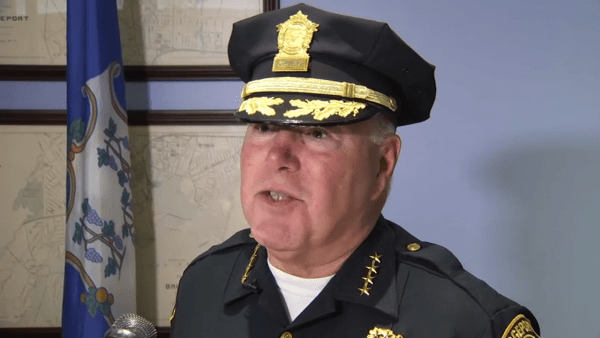 At Least 3 Killed in Shootings Across NYC This Weekend, NYPD Says

“Reading the complaint and seeing the statement of the panelist, it is concerning to me what such a statement and its implications could mean in regards to the mayor and the rest of his administration,” City Council President Aidee Nieves, also a Democrat, told Hearst Connecticut Media.

According to the criminal complaint, Dunn gave confidential materials, including answers to the oral portion of the police chief exam, to Perez and tailored the scoring criteria for that exam in Perez’s favor.

Perez, investigators said, also had two police officers secretly take the written portion of the exam for him.

Dunn, 72, also instructed officials to eliminate a scoring penalty imposed if the candidates did not have a bachelor’s degree, the complaint said. Perez was the only applicant without one, authorities said.

Messages seeking comment were left Saturday for the attorneys for both defendants. Perez and Dunn both declined to comment as they left court on Thursday.

“I'm sorry it happened,” Ganim said. “It's just not a good thing for the city at all. But there is no question of (my) involvement. No claims at all. The city completely has done everything, provided everything in information. If you get an opportunity to talk to them, the government wouldn't disagree with anything I'm telling you.”