The former boyfriend charged with murdering a New Jersey woman missing since September was in court Thursday -- and made some fiery remarks aimed at the prosecutors.

Ronald Teschner is accused of killing Jacqueline Terrulli, who hasn't been seen since a Sept. 12 fire destroyed the mansion she lived in with four other people. A fire, that according to prosecutors, was fueled by nail polish dumped in her bedroom.

Teschner, a convicted felon and Terrulli's self-described on again, off again boyfriend, was arrested 18 hours after the blaze in Paterson. He was found driving the missing woman's Jeep and allegedly had two shotguns illegally in his possession.

"He's full of s***!" was just one of the many outbursts Teschner directed at prosecutors Thursday in a Monmouth County courtroom. 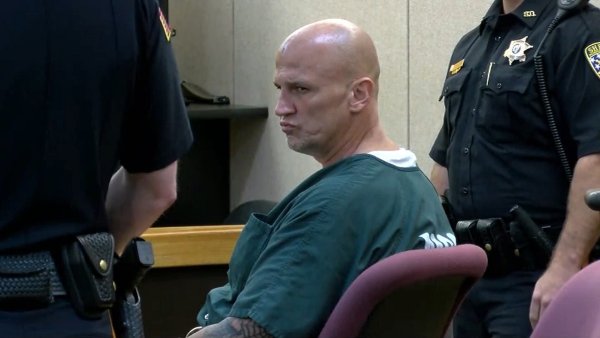 Teschner quipped back, "What are you going to do? Lock me up?"

Oxley struggled to control Techner, who looking at the prosecutor said "I didn't hurt her."

However, the prosecution says a jailhouse cell mate heard Teschner boasting of what he did, including allegedly wrapping Terrulli's body in a blue tarp and dumping it at a still unknown location.

Despite multiple searches including in Deal Lake, her body has yet to be found.

In yet another outburst, Teschner said: "He got information from a f****** crackhead dope fiend."

Terrulli's 91-year-old mother was in court Thursday to see the accused for the first time since her daughter had let him live in this house to get over a drug addiction. Terrulli was allegedly about to kick him out the day of the fire.

The man had multiple outbursts in court on Monday on unrelated charges, as the judge ordered him held while the search for woman missing since her Ocean Township home burned down. NBC New York’s Brian Thompson reports.

Teschner’s final outburst in court sounded like a threat to prosecutor Joe Cummings because "the snitch," as the defense called him, had been arrested recently for breaking into a sheriff officer’s home.

"Too bad it wasn't your house I was accused of breaking into," Teschner said.

However, with no body, and only the hearsay of Teschner’s cell mate, the judge put off a decision on keeping him in detention or releasing him until late Friday afternoon.

Lorraine had final words for Teschner outside court.

"I would say to him, 'Tell me where my daughter is. Please it’s been too long now I just want to find her,'" she said fighting back tears.