“We believe firmly in our sister’s innocence. We are very disappointed with the verdict," her family said in a statement -- and vowed to support her appeal

Members of Ghislaine Maxwell's family say they still believe she is innocent after a New York City jury found her guilty of luring teenage girls to be sexually abused by American millionaire Jeffrey Epstein.

In a statement issued late Wednesday, the Maxwell family said it would support the British socialite's efforts to appeal her conviction.

“We believe firmly in our sister’s innocence. We are very disappointed with the verdict,’’ the statement read. “We have already started the appeal tonight, and we believe that she will ultimately be vindicated.”

Jurors deliberated for five full days before finding Maxwell guilty of five of six counts in the sex trafficking case, capping a month-long trial featuring sordid accounts of the exploitation of girls as young as 14.

Each charge carries a maximum prison term of five to 40 years. The only charge the jury found Maxwell not guilty of was the second count against her, enticement of a minor to travel to engage in illegal sex acts.

Maxwell sat still and faced forward as the verdict was read, remaining stoic behind a black facemask. Afterward, she poured herself a cup of water and leaned over to confer with one of her lawyers, Jeffrey Pagliuca, who patted her on the back. Each member of the jury confirmed to judge that the verdict was unanimous. As she left the courtroom, Maxwell looked briefly at her siblings — who were present each day of the trial — in the front row, but seemed almost expressionless.

She did not hug her lawyers on the way out, a marked change from previous days during which Maxwell and her team were often physically affectionate.

“A unanimous jury has found Ghislaine Maxwell guilty of one of the worst crimes imaginable – facilitating and participating in the sexual abuse of children. Crimes that she committed with her long-time partner and co-conspirator, Jeffrey Epstein. The road to justice has been far too long. But, today, justice has been done," said Damian Williams, U.S. Attorney for the Southern District of New York.

"I want to commend the bravery of the girls – now grown women – who stepped out of the shadows and into the courtroom," Williams added. "Their courage and willingness to face their abuser made this case, and today’s result, possible ... This Office will always stand with victims, will always follow the facts wherever they lead, and will always fight to ensure that no one, no matter how powerful and well connected, is above the law.”

Maxwell was remanded to Metropolitan Detention Center, where she has been in custody since the days after her arrest. Before the trial was adjourned, the attorney for Maxwell, Bobbi Sternheim, asked the judge about getting a coronavirus vaccine booster for Maxwell. Judge Alison J. Nathan said that it was her understanding it would be available.

Maxwell could face up to 60 years in prison at her sentencing, the date of which has not yet been set. The most serious charge, sex trafficking of a minor, alone carries up to a 40-year sentence. However, it is not likely that she will face the maximum time, legal experts said.

Ghislaine Maxwell, former British socialite and close associate of Jeffrey Epstein, was found guilty on Wednesday on five charges related to the sex trafficking and abuse of teenage girls.

The central question that was posed to jurors throughout the trial was: Was Maxwell the puppet of Epstein, or his accomplice? The charges against her stemmed from the allegations of four women who say she and Epstein victimized them as teens from 1994 to 2004.

Prosecutors alleged there’s evidence Maxwell knew that the victims, including a 14-year-old, were below the age of consent and that she arranged travel for some between Epstein’s homes, including his estate in Palm Beach, Florida, his posh Manhattan townhouse and at other residences in Santa Fe, New Mexico, and London.

The prosecution, mounted by the U.S. Attorney's Office for the Southern District of New York, hinged on the accusations of four women who say they were teenagers when Maxwell and Epstein sexually exploited them in the 1990s and early 2000s.

Starting on Nov. 29, three of them testified under the pseudonyms Jane, Kate and Carolyn. One, Annie Farmer, decided to tell her story publicly. 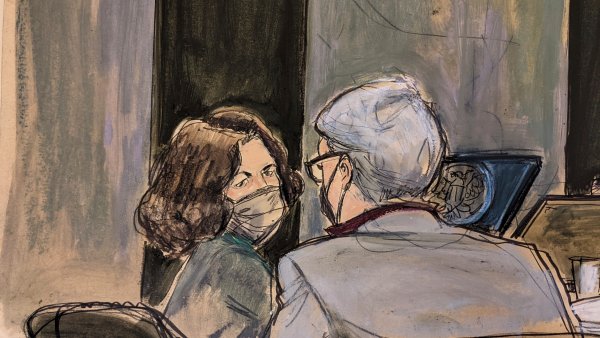 The trial was originally projected to last six weeks, but prosecutors rested much earlier than expected.

Epstein killed himself at a Manhattan federal lockup in August 2019, a month after his arrest on sex trafficking charges. Authorities charged Maxwell in July 2020, arresting her after tracking her to a $1 million New Hampshire estate where she had been holed up during the coronavirus pandemic.

Maxwell, who declined to testify during the trial, had pleaded not guilty and vehemently denied wrongdoing. The 60-year-old British socialite, jailed in Brooklyn since her arrest, called the claims against her “absolute rubbish.” Maxwell’s lawyers and family said she was merely Epstein’s pawn, now paying “a blood price” to satisfy public desire to see someone held accountable for his crimes.

The wealthy, Oxford-educated Maxwell is the daughter of British newspaper magnate Robert Maxwell, who died in 1991 after falling off his yacht — named the Lady Ghislaine — near the Canary Islands. Robert Maxwell, whose holdings at the time included the New York Daily News, was then facing allegations that he had illegally looted his businesses’ pension funds.

Ghislaine Maxwell holds U.S., British and French citizenships and was repeatedly denied bail in the run-up to her trial.

A superseding indictment in March also charged Maxwell with two counts of perjury, but the judge granted the defense's request to spin those off into a separate trial. Prosecutors have not said whether they intend to try her on those counts.