The McMorris family returned to Suffolk court Wednesday, hopeful of moving closer to justice for their son Andrew -- a 12-year-old boy who died after a man convicted of driving drunk plowed into him and his Boy Scout troop in 2018.

After a delayed sentencing due to allegations of jury misconduct, 61-year-old Thomas Murphy, Andrew's convicted killer, was sentenced to the maximum amount of time -- 8 1/3 to 25 years.

Murphy was supposed to be sentenced late August in Central Islip for the 2018 death, but the judge postponed the sentencing after four jurors came forward, signing affidavits of alleged misconduct during last year’s trial. The jurors said they discussed the case and even read news accounts during the trial – something the judge warned them not to do.

The McMorris family returned to Suffolk court Wednesday, hopeful of moving closer to justice for their son Andrew -- a 12-year-old boy who died after a man convicted of driving drunk plowed into him and his Boy Scout troop in 2018.

Murphy was convicted of driving drunk and slamming his SUV into a group of Boy Scouts out on a hike, injuring several and killing Andrew McMorris.

Before the sentencing, Andrew's parents, sister, family and friends spent nearly three hours recounting the sweet life and agonizing death of the boy they called "a beautiful soul."

"I've chosen not to speak until now, because I thought after Thomas Murphy was sentenced, I could somehow find the right words to accurately describable the pain and loss my family and community has gone through," said sister Arianna McMorris. "But I still find myself speechless, because there are no winners today."

"We are all broken ... Our number one cause is for this to never happen to another family," Andrew’s mother Alisa McMorris said. 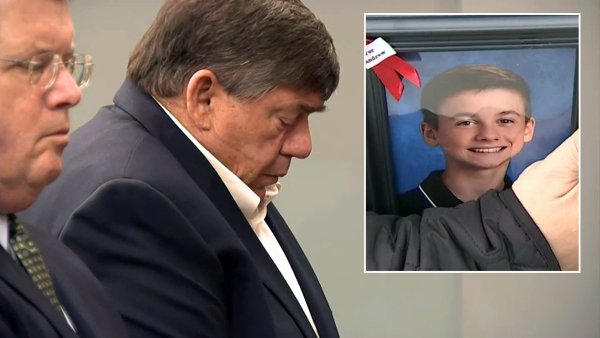 Following August's development, the McMorris family expressed outrage outside court, saying that the defense brought these allegations forward simply to delay sentencing and keep Murphy out of prison for as long as possible.

“This is completely outrageous,” Alisa McMorris said through tears at the time. “And to put a victim’s family through this is unconscionable.”

However, earlier this month, Murphy’s lawyer was so vehement in his arguments he threw his pen during an exchange with the judge. Later, the judge found Steven Politi in contempt of court.

"I don’t think I committed contempt.  I was trying to go ahead and represent my client," Politi said at the time.

The man who was found guilty of killing a young Boy Scout in Suffolk County while driving intoxicated will avoid prison time for now, after defense lawyers said four jurors said they discussed the case and read news reports of the trial while it was ongoing. NBC New York's Greg Cergold reports.

After the court fireworks that ended with Politi's contempt charge, 18 jurors and alternates began answering questions about their conduct during the trial.

One denied he read news accounts of the trial. Another reported hearing a half dozen off-handed comments by fellow jurors, including "that wasn’t right" or "that can’t be."

Nevertheless, juror No. 8 denied anything influenced her guilty verdict, saying that jurors tried very hard to maintain the integrity of the process.

At the time, the McMorris believed all of this was meant to delay Murphy’s prison term, sentiments the Suffolk County's district attorney also shared in August, calling the defense tactics a mean-spirited means of keeping their client out of prison for as long as possible, while insisting the guilty verdict will be upheld.

Murphy's lawyer still calls what happened an accident, insisting his client was not drunk the day of the crash. Murphy didn't speak at his sentencing, but his lawyer said Murphy would gladly trade places with Andrew.