A New York State Police trooper was denied bail after being accused of deliberately ramming an SUV he was pursing, causing the vehicle to flip and led to the death of an 11-year-old Brooklyn girl.

Christopher Baldner was remanded following Thursday's court appearance, meaning he will stay behind bars until his trial starts, where he faces second-degree murder charges for causing the death of Monica Goods in Dec. 2020.

Tristan Goods was driving his wife and two daughters to visit relatives before Christmas when the trooper stopped him on I-87 for speeding in the town of Ulster, about 95 miles north of New York City. Baldner sprayed pepper spray into the vehicle during the stop, prosecutors said, but it was not clear what caused him to do so. Goods said he sped away because he was concerned for his family's safety. 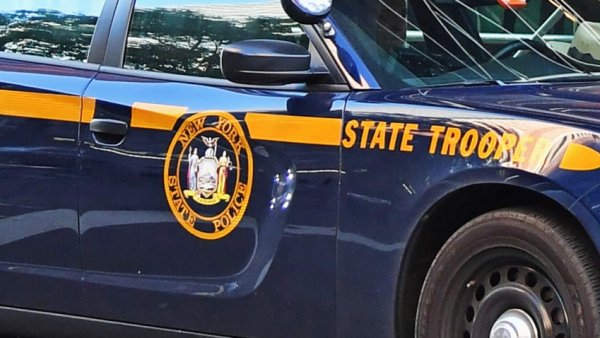 State police said the father then drove off, resulting in a chase. Baldner allegedly struck the Goods’ SUV from behind twice before it hit a guardrail and flipped. The SUV flipped over several times and came to rest upside down, prosecutors said.

Tristan Goods' daughter, Monica, was ejected from the SUV and pronounced dead at the scene. Her 12-year-old sister was seriously injured.

"He could have used other, safer methods if they were authorized by a supervisor to end the pursuit, and instead he chose to intentionally ram the Goods' vehicle two times within nine seconds, and that is what caused the death of Monica Goods," said prosecutor Jennifer Gashi.

Baldner's defense attorney portrayed a different image of the traffic stop for the judge.

"After the Goods' vehicle was stopped at 101 mph in a 65 mph zone, there were exchanges between the operator of that vehicle and Mr. Baldner," said John Ingrassia. "There were repeated and numerous requests by Trooper Baldner for the operator to identify himself."

The trooper is accused of deliberately running a driver off the road, killing the driver's 11-year-old daughter — who was in the car — in the process. NBC New York's Jessica Cunnington reports.

The troopers union that represents Baldner said it was disappointed with the judge's decision to keep him behind bars.

"You have a trooper that has lived in this area for almost two decades. He has a family, kids, he owns a house — he's not going anywhere," said Thomas Mungeer, president of the Police Benevolent Association of the New York State Troopers. "I believe the Bail Reduction Act of 2019 has worked for everybody, but in this case, it didn't work for my trooper."

There was a brief outburst in court as Baldner was led away, with someone yelling "murderer" at him.

Michelle Surrency, Monica's mother, thanks supporters of the family who gathered outside the court, and was pleased with the judge's decision.

"He got remanded today because that's where he deserves to be, my child does not have that option. My children no longer have a sister," Surrency said.

If convicted, Baldner could spend the rest of his life in prison.