Connecticut Moving Ahead With May 20 Reopening Despite Calls for Delay

Despite a call on Thursday by a group of Democratic state senators to delay plans to begin phasing out Connecticut's COVID-19 restrictions next week, Gov. Ned Lamont said his administration is still moving ahead carefully toward the planned May 20 partial reopening of certain Connecticut businesses.

The governor, a Democrat, noted that hospitalizations are in the third week of a downward progression and the state is on pace to “blow through” a projected 42,000 tests per week beginning next week, ramping up to more than 100,000 by June.

“I appreciate the ongoing concern that people have, but I think we’ve got the right balance going forward right now,” Lamont said during his daily media briefing. “I think you have a sense that we put public health and public safety first and foremost. Whatever we do, we’re doing very cautiously. ”

In one of two letters, lawmakers noted how some parts of the state are still seeing increasing numbers of COVID-19 cases. The latest data show cases climbed by 609 from Wednesday, to nearly 35,500. But that comes as the state is ramping up testing. Meanwhile, the number of deaths spiked by 94 since Wednesday, for a total of 3,219. More than half of those are nursing home residents.

“Reopening is essential — but to do it while the first wave of the pandemic is still raging will not lead to a second wave, it will simply add fuel to the first wave, delaying our eventual recovery,” the senators wrote to Lamont.

Senate Republican Leader Len Fasano said he supports the first reopening date — Wednesday, May 20 — noting the state has the medical capacity to deal with an uptick in cases of the coronavirus.

In the meantime, he said, the state is suffering in other ways because of current restrictions, noting an increase in domestic violence, drug abuse and mental health problems.

NYC Breaks 1973 Record for Doing Nothing 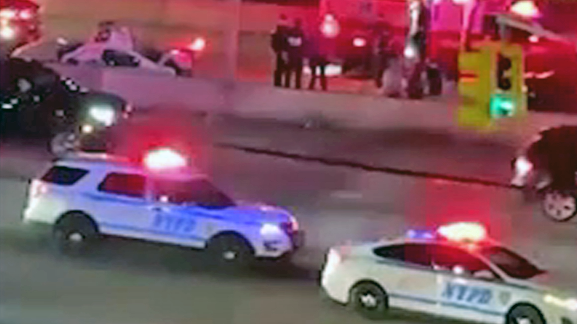 “Those are all huge health care concerns," he said. “Huge.”

For most people, the virus causes mild or moderate symptoms, such as fever and cough, that clear up in two to three weeks. For some, especially older adults and people with existing health problems, it can cause more severe illness or death.

In other coronavirus-related developments around Connecticut:

Representatives of nursing home and assisted living facilities in Connecticut said new data released Thursday evening show the coronavirus “still has a hold” on the state's nursing homes. In a joint statement, the presidents of LeadingAge Connecticut, the Connecticut Association of Health Care Facilities and the CT Assisted Living Association, said the latest numbers also reveal “the pernicious character of the highly contagious virus, now known to be transmitted by asymptomatic carriers" and is “no way a reflection of the quality” of the facilities and the care they provide.

A bipartisan group of eastern Connecticut state lawmakers on Thursday urged Lamont to to personally engage with Mashantucket Pequot and Mohegan tribal leaders to determine how the state can help them reopen Mohegan Sun and Foxwoods Resort Casino as soon as possible and support the roughly 10,000 workers who are currently out of work, as well as the hundreds of impacted local vendors. The lawmakers also called on Lamont to authorize the tribes to operate internet gambling and sports betting, a revenue source they argue is needed to help restart “two economic powerhouses” in the region.

“The continued closure of the casinos is untenable,” they wrote, noting how the situation warrants the governor's personal involvement. Both casinos have been shuttered since March 17. It remains unclear when they might reopen.

“I really do care about the people. I care about getting those people back to work safely,” Lamont said. “I do worry a lot about the nature of a big gathering place like a casino. It does bring in people from all over the region, all over the Northeast region ... It can be a place that's a source of high risk."

Paul Mounds, Lamont's chief of staff, said the governor and his administration have been in constant contact with the tribes, with more discussions planned Friday.

Meanwhile, Lamont said he's not inclined to authorize internet gambling and sports betting in an executive order, but said he is open to further discussions. Also, he said he plans to ask his economic advisor to see if there's a way to help target some federal assistance to the businesses impacted by the casino closures.

The state Department of Correction says it has begun allowing 30-minute video calls between juvenile offenders and family members. The “video visits” are being conducted over the Zoom Cloud Meetings application from the York Correctional Institution for women and the Manson Youth Institution. The department says the visits can only be made to people on the offenders approved visitation list. Three authorized adult visitors may participate. Visitors under 18 may only participate if accompanied by a parent or legal guardian. In person visitation has been suspended during the pandemic and previously inmates had been limited to telephone calls with their loved ones.

The guard’s C-130H aircraft flew above hospitals and other health care facilities throughout the state. Numerous people posted photos of the four-engine turboprop military transport aircraft on social media as it flew overhead.

Maj. Gen. Francis Evon, the adjutant general of the Connecticut National Guard, said it’s a way to show “appreciation to the thousands of heroes at the front line battling COVID-19.”

Connecticut is receiving $111 million in federal coronavirus relief aid to help school districts during the global pandemic. The Connecticut State Department of Education is developing an application process for school districts, who can use the money for things like computer and software purchases, mental heath services and summer learning.