A private contractor has been accused of falsifying an inspection report on the facade of an Upper West Side building four years before a piece of terracotta from the structure fell and killed a 2-year-old girl as she sat next to her grandmother on a bench, according to a Department of Investigation report released Tuesday.

The report also found the Department of Buildings failed to act after being warned about a "scary" crack in the facade at the Esplanade on West Avenue near 74th Street seven months before the terracotta fell on the head of Greta Greene as she sat with her grandmother outside the building May 17.

The girl and her grandmother were both taken to the hospital after the incident, and Greene died a few days later.

While investigating the death, DOI said it found that inspector Maqsood Faruqi had falsified the building's last inspection report in 2011. The DOI alleged that Farqui had never been to the building to do an inspection, and wasn't hired until after the date the inspection was allegedly done.

According to the DOI report, a private consultant who was inspecting a building facade adjacent to the Esplanade emailed the DOB that he saw at least one "scary" crack on the facade and warned that the agency should "get someone over pretty quick on this" in October of 2014 -- more than three years after Farqui's allegedly falsified report and seven months before the facade fell on the toddler. 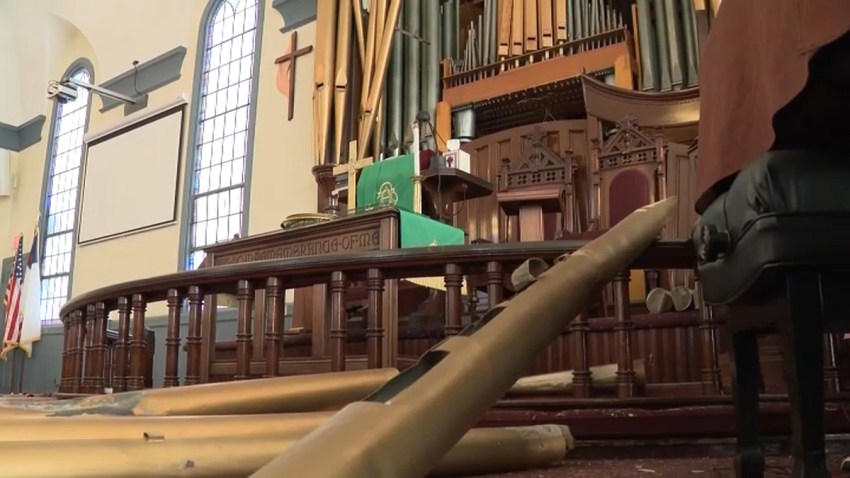 A member of DOB's facades unit acknowledged the warning, but the agency took no action; it neither sent an inspector nor did any remedial safety work, according to the report.

An administrative architect allegedly asked a supervisor via email if the building could be inspected, but investigators say it appeared as though the email was never even opened.

In a statement released by their attorney Michael Glass, Jayson and Stacy Greene said they were "surprised and dismayed to learn of the numerous failures to keep this building safe," and were "grateful" investigators were taking it seriously.

"Our hope is that these findings will lead to stricter regulations surrounding building inspections and repairs citywide, and that we can prevent what happened to Greta from ever happening again," the statement read. "We remain heartbroken over our loss, and it is painful for us to discover just how preventable it was."

While investigating Greene's death, DOI officials found more than 1,000 other buildings across the city that were overdue for investigation and nearly 1,500 more structures that had been deemed unsafe but were never repaired.

The DOI recommended that the Buildings Department make several changes to help correct the issues, including making a database that tracks the histories of buildings that are required to file facade inspection reports with an alert system for structures that aren't in compliance with city code.

NBC 4 New York has reached out to the Buildings Department for comment.

Mayor de Blasio thanked the agency for its cooperation throughout the investigation and commended DOI and the Manhattan district attorney's office for the arrest of Farqui.

"This investigation has uncovered ways the city can more rapidly remedy the most dangerous situations, improve practices and, hopefully, prevent similar tragedies," de Blasio said. "The city will ensure that property owners meet their obligation to keep their buildings safe.”

An attorney for Farqui did not immediately respond to a request for comment.