Daniel Prude Protesters Arrested in Brooklyn, as Family Angered Over No Charges for Officers

While the brother of Daniel Prude said video recorded by Rochester police body cameras offered irrefutable proof of a crime and was in disbelief over the lack of charges, Prude's son said the outcome wasn't surprising given other findings in police deaths involving Black people

Joe Prude watched in angry disbelief as New York state’s top prosecutor announced there would be no criminal charges against the police officers seen on video pinning his younger brother to the street until he was on the cusp of death.

Prude said Wednesday that videos recorded by Rochester Police officers’ body cameras after they caught up with Daniel Prude, naked on a frigid night last March, are irrefutable proof of a crime.

His anger was echoed by the dozens of protesters who took to the streets of Brooklyn Wednesday night, upset over the lack of charges against the officers. The protest in Williamsburg McCarren Park was one of at least three throughout the afternoon and evening in NYC, and drew a sizeable police response. Police said "several" people were arrested in the area of Driggs Avenue and South 4th Street, but did not have an exact number. 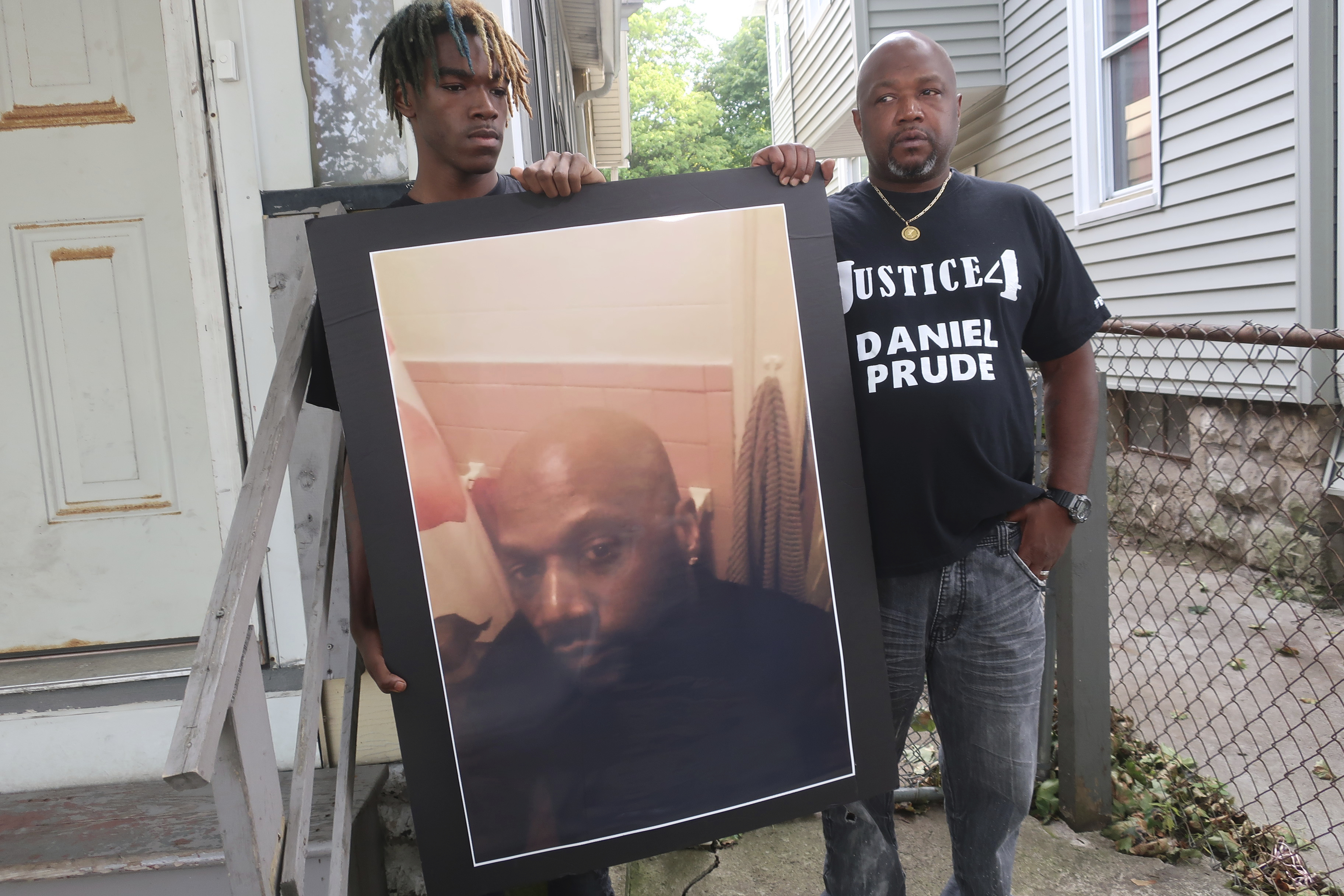 No Charges Against Officers Involved in Daniel Prude's Death Attorneys for the seven police officers applauded a grand jury’s decision Tuesday not to charge them, and insisted the videos are only evidence of the officers doing their jobs correctly.

“Murder, manslaughter, something,” is what Joe Prude said he wanted to hear from Attorney General Letitia James nearly a year after his brother died following the fatal encounter with police. Daniel Prude, who was visiting from Chicago, had irrationally bolted from his brother’s home, under the influence of PCP, and it was Joe Prude who called police asking for their help.

“How are you the attorney general and there’s still no charges brought up?” Prude said he recalled thinking as he watched James’ announcement Tuesday, livestreamed from Rochester’s Aenon Missionary Baptist Church, not far from where Daniel Prude died.

The police officers’ body camera footage shows Officer Mark Vaughn assuming a pushup stance and pressing Prude’s head to the pavement while others immobilize his legs and Officer Troy Taladay kneels on Prude’s back — what police union officials say is a standard restraining technique known as “segmenting.” Prude is lying face down, handcuffed, with a mesh “spit hood” on his head. After about two minutes, he vomits and stops breathing. He was taken to hospital and put on life support but died a week later.

During a telephone interview with The Associated Press, Joe Prude pointed to what he believes is a particularly damning moment in the video, one in which he said he could hear the fear in his brother’s voice. It’s when Daniel Prude remarks, “They’re trying to kill me.”

“And then they end up killing him,” Prude said.

Attorney General Letitia James announced her intention to form a grand jury following the death of Daniel Prude some five months after his death in Rochester, New York.

The officers’ attorneys said Daniel Prude’s use of PCP, which caused irrational behavior, was “the root cause” of his death. Officer Taladay’s attorney, Dan Mastrella, said Wednesday that he agrees the video footage “isn’t pretty,” but he said it shows officers did nothing wrong.

“What a terribly unfortunate result that Daniel Prude did not survive,” Mastrella said. “What the police officers could have done differently escapes me.”

“I know what it looks like and I understand why people are upset …. (but) what I saw on that tape that night was cops doing their jobs,” he said.

James issued a report recommending, among other things, that officers be trained to recognize the symptoms of “excited delirium syndrome,” which can make people vulnerable to cardiac arrest. The medical examiner and the attorney general’s expert both concluded that Prude was in a state of excited delirium because of his drug use.

“If there’s training available that lends itself to a different outcome, of course anybody would be in favor of it,” Mastrella said.

A bigger problem, said Nobles, is that police are being asked to do too much.

Nathaniel McFarland, one of Daniel Prude’s five children, said he was not surprised that the officers weren’t charged. He noted it was similar to other findings in police deaths involving Black people, his attorney Stephen Schwarz said.

“He was hopeful this would be different,” Schwarz said, especially given the video footage.

On Tuesday, Attorney General James said that while she was bound to respect the grand jury’s decision, she also condemned a system that she said had “frustrated efforts to hold law enforcement officers accountable for the unjustified killing of African Americans. … Eric Garner, Tamir Rice, Breonna Taylor, George Floyd. And now Daniel Prude.”

Schwarz said it was hard for McFarland and his siblings “not only to learn about their father’s death, but to watch it.”

“The fact that it was all captured on video makes it all the more difficult for them to accept this outcome,” he said.