With soul music blaring, free doughnuts in the parking lot, a steel drum and a balloon arch at the entrance, New Jersey's cannabis kickoff for people 21 and older had the feel of a fair more than a store opening

Michael Barrows wore his Grateful Dead T-shirt and Jerry Garcia face mask for opening day of recreational marijuana sales in New Jersey on Thursday, one of dozens of people who lined up before dawn to join the celebratory scene.

“It’s pretty amazing, exciting, and if I get pulled over on the way home and I’m ever asked if I have any drugs in the car, now I’m allowed to say ‘Only this,’” Barrows said, holding up the canister of marijuana flower he had just purchased. Possession of cannabis is now legal in New Jersey, although driving under the influence is still prohibited.

Barrows, 60, joined a steady stream of other novelty seekers, longtime marijuana users and medical patients at RISE in Bloomfield, near the state's biggest city, Newark, and not far from New York City. 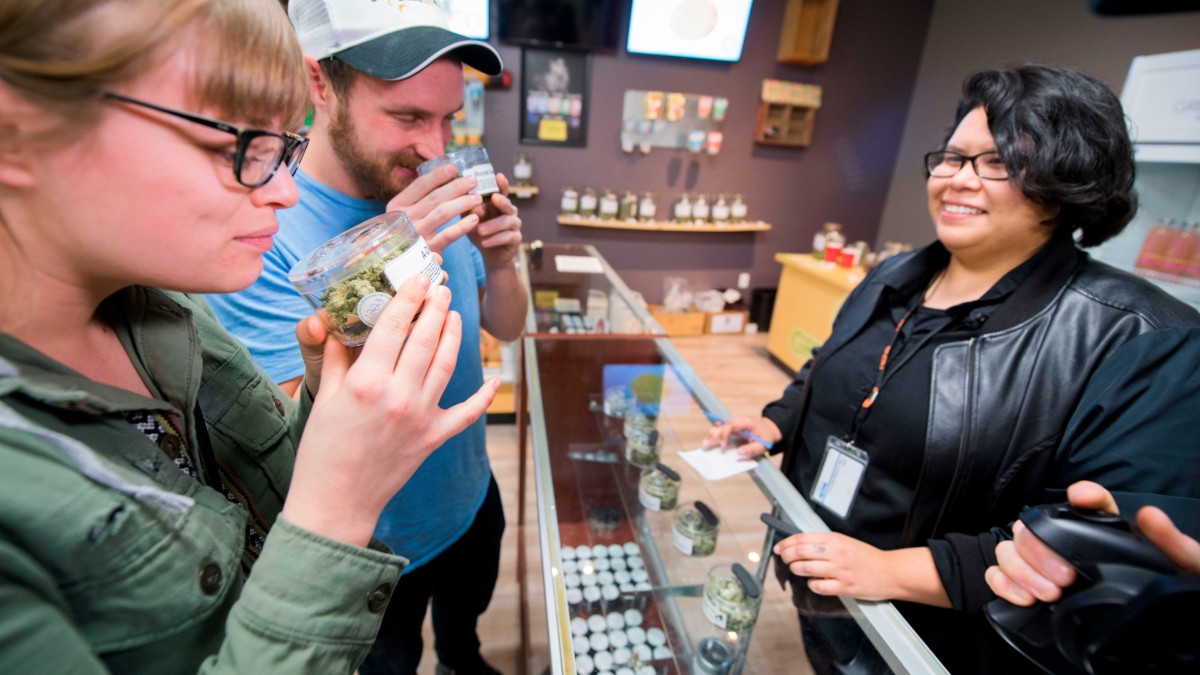 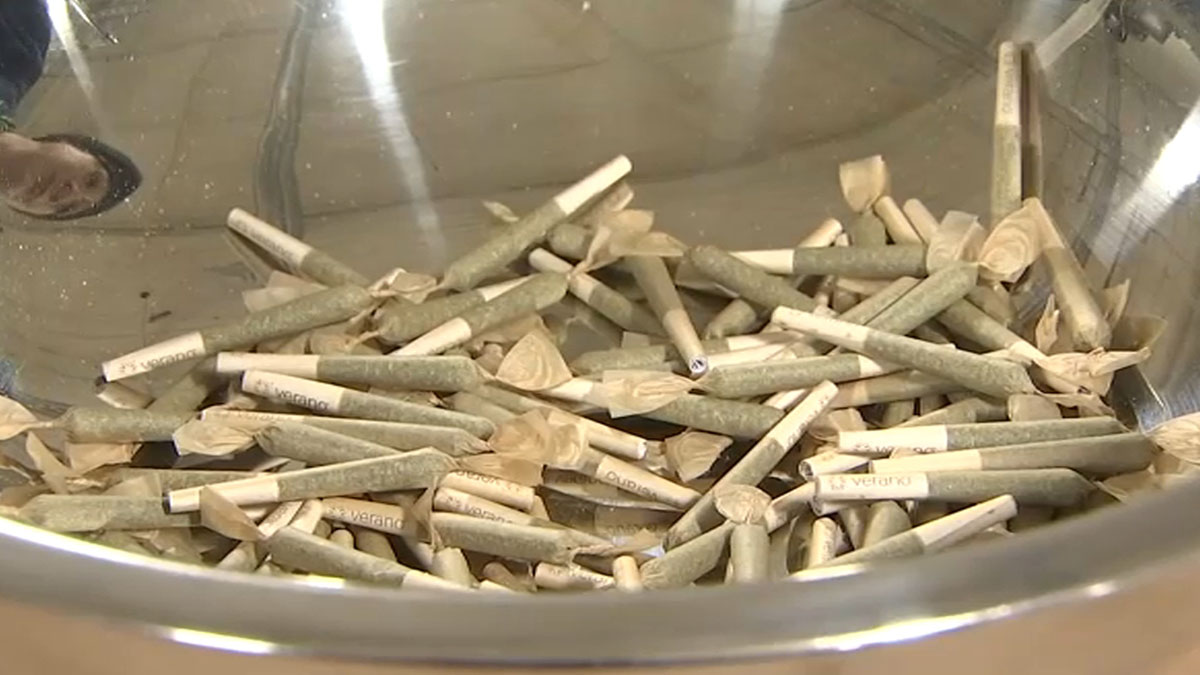 You Can Now Buy Weed Legally, for Fun, in NJ: Check Where to Go, Costs and More

With soul music blaring, free doughnuts in the parking lot, a steel drum and a balloon arch at the entrance, New Jersey's cannabis kickoff for people 21 and older had the feel of a fair more than a store opening.

Hagan Seeley, 23, said he had just found out a day earlier that recreational sales were starting and decided to see what the scene looked like. He was impressed with the venue, decorated with an old train station-style tote board and long wooden tables featuring products under glass globes.

“It feels right. It feels safe. It feels like everything you’d want it to be rather than anything you could get anywhere else,” Seeley said.

The start of the recreational market comes a week after Democratic Gov. Phil Murphy announced that state regulators had cleared the way for recreational sales at seven “alternative treatment centers” that had already offered medical cannabis. The seven centers operate 13 facilities across the state.

Murphy, who has long backed recreational marijuana legalization and signed the bill that set up the marketplace, appeared at ZenLeaf in Elizabeth for its first day of recreational sales. The governor said he wouldn't be trying any marijuana, saying earlier this week it's not his “thing,” and that he prefers Scotch. Murphy said he would be pushing for a “federal fix” for marijuana as well, though it was unclear whether he was referring to recreational legalization, national decriminalization or something else.

Hadi Battice, 47, is a Navy veteran and medical marijuana card holder for his post-traumatic stress disorder. He’s a regular at ZenLeaf and said he’s never seen the location as busy as it was Thursday.

New Jersey’s recreational cannabis law gives priority status to people of color for dispensary licenses, a fact that will help knock down “brick walls” people faced for years during the war on drugs, Battice said. “It’s about time that minorities, people of color, Black people, brown people actually have a chance to get into the business.”

Charles Pfeiffer stood in line for about 2.5 hours and said he believed he was the first recreational customer to make a purchase at the ZenLeaf location. He cheered loudly and pumped his hands in the air when he was let into the shop.

He bought cannabis flower and candy for about $140 and joked about how quickly he'd need to return to buy more.

“I'll be back tomorrow,” he said. “I'm kidding, probably within a week.”

ZenLeaf employee Destiny Pimentel said she came to realize the “benefits of responsible cannabis use” after her older brother died. “When I consume cannabis I am not as anxious and I can focus,” she said. She’s committed to showing people it’s possible to use cannabis and have a successful career, she added.

New Jersey is among 18 states, plus the District of Columbia, with legalized recreational marijuana markets. Thirty-seven states, including New Jersey, have legalized medical marijuana.

New Jersey is first among its closest neighbors to begin recreational sales. New York is moving forward with a recreational market but sales are not expected to start until the end of the year, state officials have said. Neighboring Pennsylvania has medical cannabis but not recreational, while legislation to permit recreational marijuana in Delaware was defeated in March.

Ben Kovler, of Green Thumb Industries, which operates the Bloomfield dispensary, was at the opening Thursday. He said he expects demand to grow since news of the start of sales had only been known by the public for a week.

“It’s a moment in time in American history where prohibition 2.0 is lifted,” he said before the opening.

To get regulatory approval, the facilities told regulators they would not interrupt access for medical marijuana patients.

Ziad Ghanem, of TerrAscend, said the centers would initially have a “narrower menu” for recreational users in order to accommodate patients.

The centers also are required to meet social equity standards, such as providing technical knowledge to new marijuana businesses, especially social equity applicants — those located in economically struggling parts of the state or people who have had cannabis-related offenses.

New Jersey's tax revenues are expected to climb, but it's not clear by how much. Murphy’s fiscal year 2023 budget is pending before the Legislature and estimates revenues of just $19 million in a nearly $49 billion budget.

Legislation governing the recreational market calls for the 6.625% sales tax to apply, with 70% of the proceeds going to areas disproportionately affected by marijuana-related arrests. Black residents were likelier — up to three times as much — to face marijuana charges than white residents. Towns can also levy a tax of up to 2%.

In a memo to law enforcement officers across the state, acting Attorney General Matt Platkin reminded police that unregulated marijuana continues to be an illegal substance.

State regulators say dispensaries are allowed to sell up to the equivalent of 1 ounce of cannabis, which means an ounce of dried flower, or 5 grams of concentrate or 1,000 milligrams of edibles, like gummies. Perishable items like cookies and brownies are not available.