The shooting began after an officer approached a van believed to be linked to a murder; the suspects shot the cop and took off, then killed three others after holing up inside a store

A police officer and three civilians were killed during a shootout in Jersey City which also left the two suspects dead, law enforcement officials said.

According to senior law enforcement officials, the Tuesday afternoon shootout began when a detective saw a U-Haul truck possibly linked to the murder of a livery driver over the weekend in Bayonne. As the officer approached, a suspect got out of the van to shoot the officer before taking off.

That officer, later identified as Det. Joseph Seals, died from his injuries. The preliminary investigation suggests the 39-year-old father of five was killed "while trying to interdict the bad guys" at a cemetery on Garfield Avenue, said Jersey City Police Chief Michael Kelly.

Seals had been a police officer for more than 15 years, and was with the Jersey City Police Department since 2006, officials said at a press conference Tuesday evening outside Jersey City Medical Center. He was a detective with the Cease Fire Unit, Kelly said.

After shooting the officer, the suspects — a man and a woman, according to law enforcement sources — fled and drove their U-Haul truck to the Jersey City Kosher Supermarket on Martin Luther King Drive, where the standoff started around 12:30 p.m., a senior law enforcement official said.

Law enforcement sources told NBC New York surveillance video shows the duo shoot a Hasidic man on the street and then run into the store, where they began firing at the victims inside. The suspects were armed with long guns and plenty of ammo, and had a bomb-making materials inside the truck, officials said.

While some were happy with how the Jersey City schools handled the whole situation during the deadly shootout, other students and parents were upset over the lack of communication from the school system. NBC New York's Erica Byrfield reports.

A fusillade of at least 100 bullets were fired during the exchange between the suspects and police.

In addition to the officers injured outside the store, three other civilians inside were killed as the suspects saw heavily armed police vehicles approaching. Two of the victims were customers at the store and the third was working as a cashier, according to a representative of the community.

Another civilian was injured but is expected to survive, officials said.

Citing the preliminary investigation, Kelly said authorities believe the civilians killed inside the store were killed by the "bad guys." The suspects have not yet been identified, but one was a 48-year-old man, law enforcement sources said.

Law enforcement officials initially believed the incident was not terror- or hate-related, despite it occurring in a Jewish neighborhood. However, Jersey City Mayor Steven Fulop tweeted later in the night that the "the active shooters targeted the location they attacked." He added that there are no further threats, but the community "may see additional police resources" in the coming days and weeks.

The shootout was still being treated as a criminal act, law enforcement officials said.

It was not immediately known why or how the U-Haul truck that Det. Seals approached was linked to the death of livery driver Michael Rumberger.

Heavily armed local and state officers in SWAT trucks swarmed the scene, ducking behind doorways and store entrances -- some even crawling along sidewalks, closely pressed to the ground -- as they zeroed in on the store. Seemingly dozens of gunshots continued to ring out throughout the afternoon, based on audio from the scene.

The streets in the immediate area were closed off entirely, totally empty of what would normally be heavy pedestrian and vehicular traffic.

One police officer has been shot in the head amid an ongoing active shooter situation at a bodega in Jersey City Tuesday, according to the preliminary investigation, a senior law enforcement official tells News 4.

According to Kelly, citing the preliminary investigation, it will take weeks for authorities to finish the probe due to the extensive crime scene, which includes at least three different locations.

The other two locations that most be combed through for evidence is the grocery store itself and the cemetery, Kelly said.

Federal ATF and FBI agents in Newark confirmed they responded to the scene to assist as needed, as was the NYPD's Special Ops team. About a dozen schools in the vicinity were locked down initially. By 2 p.m., the lockdown order extended to every public school in the entire city, the district's superintendent said. 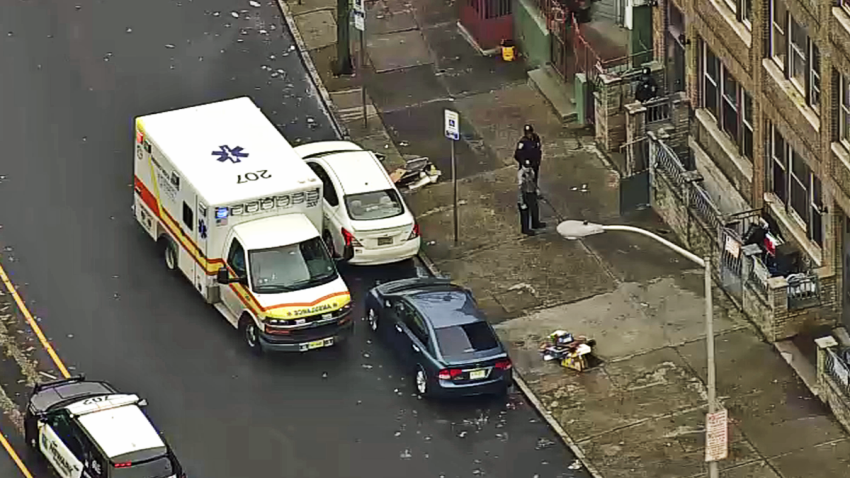 The schools, including an elementary school right across the street from the store where the suspects holed up, remained on lockdown until around 4:30 p.m.

Some parents were upset the schools sent out robocalls during the lockdown saying it had been lifted before 4:15 p.m., but students were still not released for more than a half hour later.

"The police department was immediately on the scene interjecting," Shea said. "Most active shooters end when the police arrive. In this case, one of our officers gave his life immediately trying to prevent what subsequently occurred. Two more officers were shot trying to prevent it and the Jersey City Police Department continued to respond and engage those people to minimize any possible of damage."

Superintendent of Jersey City Schools Frank Walker told NBC New York he was informed there was gunfire near one of the schools in his PS 29 district shortly after 12:30 p.m. Mass transit was also affected, with a number of bus and rail suspensions.

Andy Patel works at a liquor store about three blocks away from the site of the shooting site and said there had been consistent gunfire fire for about an hour. There was a brief pause -- and cops used the time to clear streets.

President Trump has been briefed on the situation, the White House said, and he later tweeted that "thoughts & prayers are w/ the victims & their families during the very difficult & tragic time."

New Jersey Attorney General Gurbir Grewal tweeted after the incident:
"Our hearts break for the family of the fallen @jcpolicedept officer and for the entire law enforcement family. Today's tragic events serve as a stark reminder of how our brave first responders stand ready to run to danger at a moment's notice to keep us safe."

The incident is being investigated by the Hudson County prosecutor's office, with FBI and ATF agents working alongside police as they try to find a possible motive for the attack.