Two Buffalo police officers were charged with second-degree assault after a widely shared video captured Martin Gugino falling to the ground, blood pouring from his head, after being pushed on June 4

The 75-year-old New York protester who fractured his skull when he hit his head on the pavement after being shoved by police in Buffalo last month has been discharged from the hospital, his attorney said Tuesday.

Martin Gugino's lawyer, Kelly Zarcone, said her client is now able to walk with a little help, adding that his condition is expected to improve with time. Gugino will resume his rehabilitation outside of the hospital and he thanked everyone who sent cards, letters and well wishes to Zarcone's office.

People's kind words made him feel "like it was Christmas Day," Zarcone said. 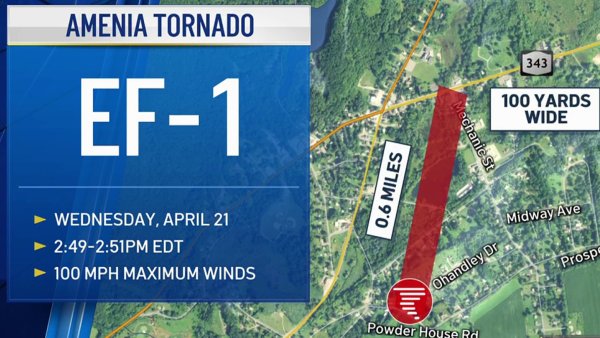 Gugino hasn't spoken to the press since the widely seen and criticized shove but he said Tuesday through Zarcone that he is pleased with the progress made to protect the safety to peaceful protesters.

"He respects the burden of authority placed upon law enforcement but looks forward to the continued implementation of systemic changes to eliminate police brutality," Zarcone said.

Two Buffalo police officers were charged with second-degree assault after video of Gugino falling to the ground after being pushed on June 4 went viral. The Buffalo area-retiree was seen bleeding from his head as officers walked away.

The officers, who could face prison sentences of up to seven years if convicted, have pleaded not guilty.

President Donald Trump, who has long sowed disinformation on Twitter, spread an unfounded conspiracy theory Tuesday about a 75-year-old man hospitalized after he was pushed by a police officer during a peaceful protest last week in Buffalo, New York.
Copyright NBC New York