The NYPD's hunt for another suspect connected to Friday's early morning string of subway attacks on a 4 train stretched into the weekend with officials releasing new station surveillance video as the alleged attackers already in custody face charges.

Three of the four teens arrested Friday, almost seven hours after the first attack, face charges of robbery, assault, and criminal possession of a weapon, according to the NYPD. The department said two of the suspects are known gang members, 19-year-old Taquarious Soto-Burgos from Brooklyn and 18-year-old Joseph Foster from the Bronx. The youngest, 16, was not identified.

The charges come as police continue to search for a remaining suspect connected to the attacks. At a press conference Friday afternoon to announce the first arrests, top NYPD officials indicated a fifth person may also be responsible for the violence.

The NYPD's working theory on Fridya was that the men would pair off in groups of three, four, or even five during the alleged attacks, based on witness reports, which suggested a fifth suspect may be involved.

Transit officers spotted the group of men matching surveillance images obtained early in the morning and distributed across the department. The men were seen riding a northbound 1 train around 11:20 a.m. Officers took the men into custody as they exited the train at 79th Street and Broadway, the officials said.

The commute turned violent Friday morning when groups of men attacked at least five people in the New York City subway in the space of just over an hour. Myles Miller reports.

NYPD officials said the first victim told detectives he was sitting aboard a southbound 4 train around 4:26 a.m. when he was approached by two unknown men, one of whom displayed a knife and slashed the victim in the face.

The victim exited the train at Union Square. The perpetrators allegedly remained on board the train as it exited the station and approached their next two victims -- one of whom was punched in the face, the other slashed with his nose cut.

Both victims exited the train at the Astor Place station. The suspects then allegedly approached the fourth victim at the City Hall station, demanded money and threw his cellphone on tracks. He was slashed in the left cheek.

A fifth victim approached police around 5 a.m. in the Bronx, reported being approached by three men and said he was stabbed in the right eye, and slashed in back and the left side of neck. He was taken to the hospital in stable condition.

Subway crime - particularly violent assaults underground - are up this year. Andrew Siff reports on how the NYPD is hoping to tamp down on the trend.

Police are still investigating but believe all of the attacks were all related. The MTA was quick to blast City Hall and blame Mayor Bill de Blasio for what they claimed was insufficient law enforcement on the subways.

“These were five very serious armed robbery and slashing incidents at stations on the same line. All seemingly could have been prevented by a uniformed presence on each of these platforms. The responsibility for these vicious attacks does not fall on an already strapped police department – it falls on City Hall and the individuals who are taking advantage of the mayor’s negligence on the issue. If he needed a wake-up call, this is it. Enough is enough. The mayor is risking New York’s recovery every time he lets these incidents go by without meaningful action," NYC Transit interim president Sarah Feinberg said in a statement Friday morning.

MTA Chairman Pat Foye and TWU Local 100 President Tony Utano held a joint press conference outside the Union Square station Friday afternoon to issue repeated calls for 600 to 800 additional uniformed officers and directed their ire at the mayor, who they blame for not curbing the recent surge in subway violence.

"City Hall cannot continue to bury its head in the sand, especially at such a critical time in the city's recovery," Foye said. Utano's comments were direct, claiming the mayor's failure to fix the violence left "blood on his hands."

Bill Neidhardt, press secretary for the mayor, pushed back against the MTA's statement on Twitter, calling Feinberg's words "an overtly political statement" and questioned the MTA's decision to include mention of five mayoral candidates who have voiced favor in supporting the transit agency's request for additional anti-crime resources.

"Their response to stabbings is to endorse a shortlist of mayoral candidates? Taking political swipes at the mayor without mention of a 500 officer surge on top of a 2,500-strong transit force. Politics before facts," Neidhardt tweeted.

His tweet provoked a response from MTA Chief Communications Officer Abbey Collins: "This is absolutely false. All the background is pointing out is something we’ve been saying for weeks - that the city needs to meet the issue head on, that it should be discussed and debated, & the mayor seems is the only person at this point who doesn’t see a serious problem." 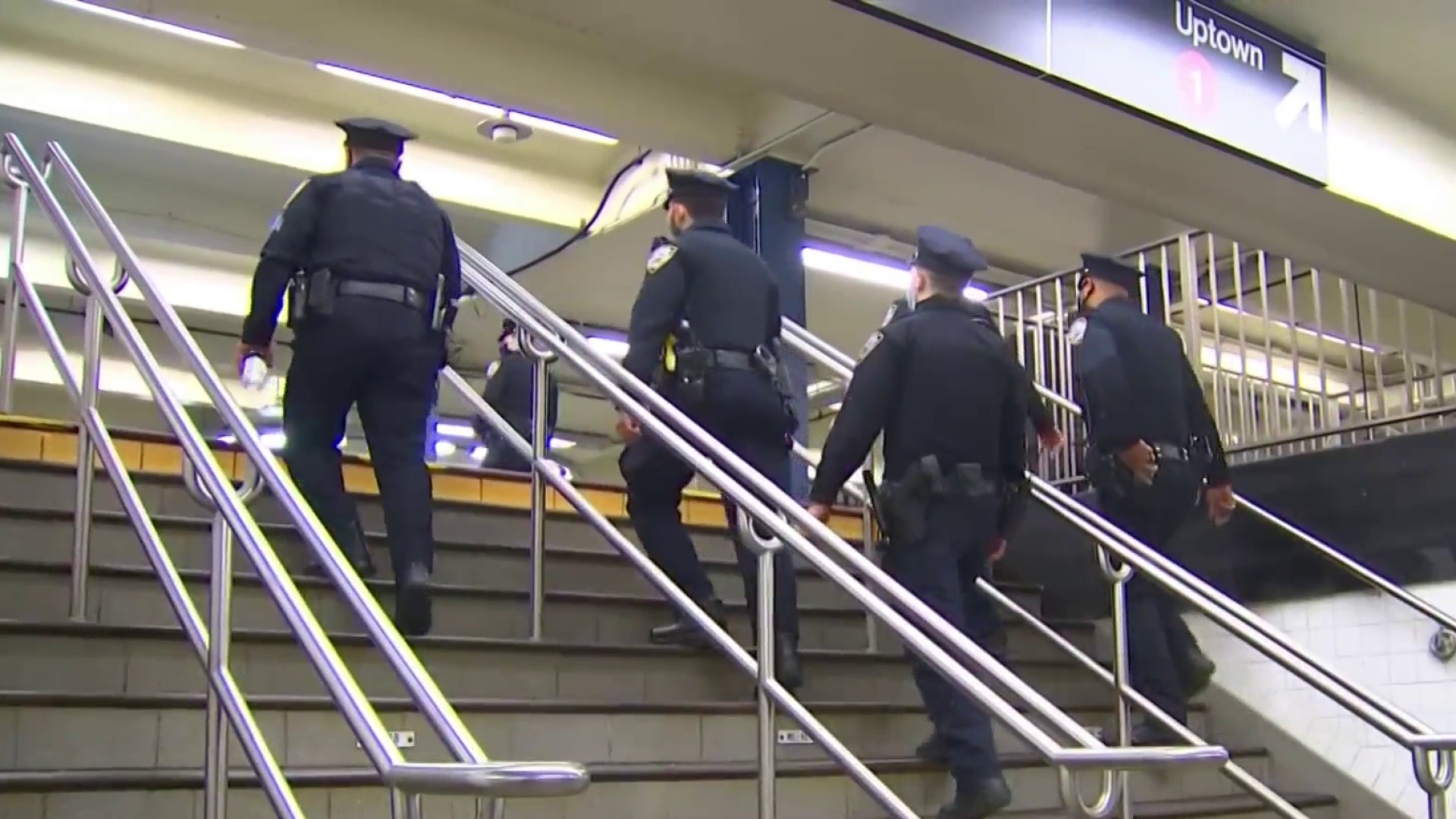 These incidents are the latest in a growing number of violent attacks on subway riders and workers, following another four assaults just Wednesday morning. Another attack weeks ago left a train conductor hospitalized in critical condition, with calls for the city to "do something" growing louder in recent weeks.

Police department statistics show while overall subway crime is down this year, felony assault is up 20 percent this year compared to last. Taking into account lower ridership because of the pandemic, the MTA and the union say the number of assaults has increased.

The MTA is asking for the police department to deploy 4,300 cops in the subway system. That’s the level of cops that were in the system when the NYPD took over the transit police in the 1990s.

In February, the NYPD increased the number of cops to 600 -- and Mayor Bill de Blasio mistakenly said last week that some have been removed, law enforcement sources told News 4.

"In the span of an hour this morning, several subway riders were the victims of unprovoked assaults, likely perpetrated by the same suspects. We won’t stand for these acts of violence in our subways. Detectives are pursuing all leads & these criminals will be brought to justice," the NYPD's Transit Bureau tweeted.