Will MTA Mask Rule End Soon? What We Learned (and Didn't) From Hochul's Rare Board Meeting Showing

The Democrat had said last week she intended to keep masks for the "short term," but didn't elaborate on what that might mean in terms of time; Dr. Anthony Fauci's latest comments suggest it could be soon

Gov. Kathy Hochul gave no indication Wednesday as to whether she plans to lift state mask requirements on public transit in the near-to-immediate future, even as her encompassing emergency order enabling many pandemic measures is set to expire.

The mask mandate, specifically, is tied to a March 2 advisory issued by the state health commissioner that declared face coverings to be necessary on public transit and in some other public settings deemed higher risk.

The commissioner, Dr. Mary T. Bassett, has the authority to issue those health regulations through an emergency regulation passed by the Public Health and Health Planning Council. The issuance from that department, specifically, is why many debatable local measures have withstood legal challenges, experts and officials say.

In this case, the health commissioner's authority on face masks extends until at least July 20, which means it doesn't expire soon but the state could end it at any time.

The state disaster emergency enabling pandemic-related executive orders from the governor's office, though, is set to expire soon -- on May 15. That declaration must be extended monthly for it to continue. Hochul has extended it five times so far.

It's unclear if she plans to extend it again. Hochul typically doesn't share her plans around COVID rule changes well in advance, accruing and analyzing data until right before deadline before making a final decision in consultation with health officials.

State guidance has long been contingent upon the guidance issued by the CDC, which is a bit in flux at the moment as the Department of Justice appeals a federal judge's decision to strike the rule.

Hochul wasn't explicitly asked about face masks on transit when she made an in-person appearance at an MTA Board meeting in Manhattan to thank transit workers who helped protect the city during the Brooklyn subway shooting earlier this month. (She also had some major transit news: free MTA bus rides to LaGuardia, anyone?.)

The only reference to face masks came from Hochul herself as she began her remarks by describing her commute to the MTA board office on Broadway in Manhattan. She simply noted the high share of people complying with the still-in-effect order.

Wednesday marked the first time ever that a sitting New York governor attended an in-person board meeting of the MTA, which is run jointly by the city and state. It's unclear how that shared management could affect the mandate if New York City leaders, for example, want to keep it in place for transit through the five boroughs. 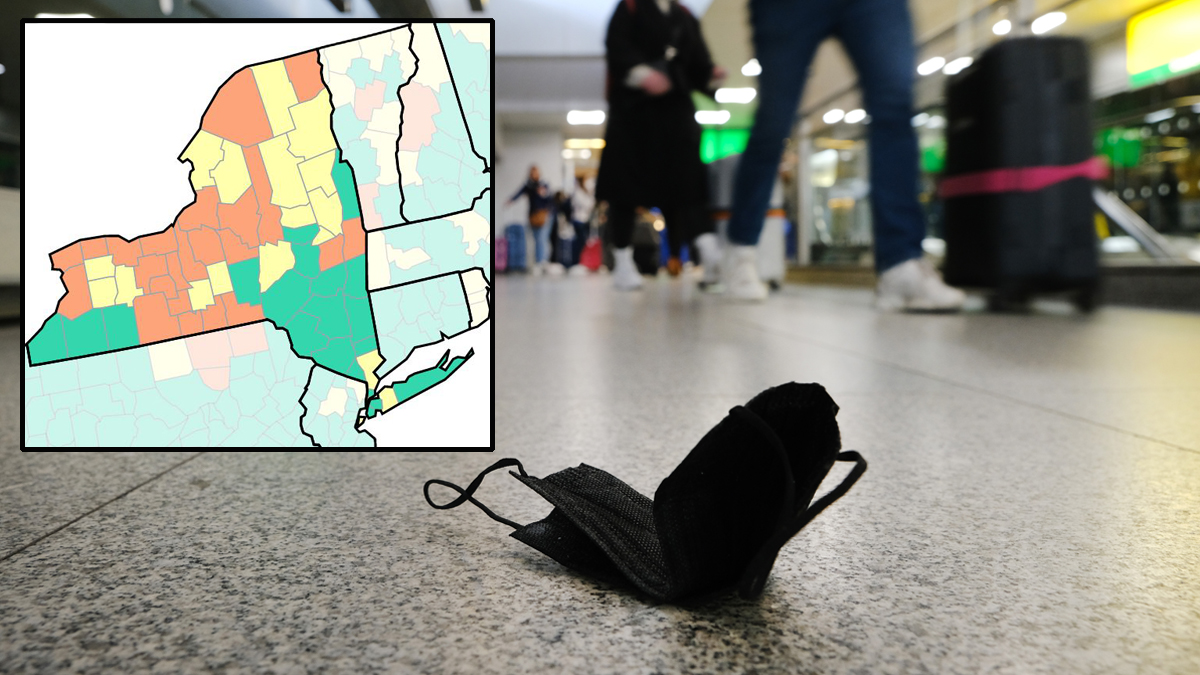 Number of High-Risk US COVID Counties Doubles in Week, and More Than 1/2 Are in NY: CDC CDC Estimates 3 in 4 Kids Have Had Coronavirus Infections 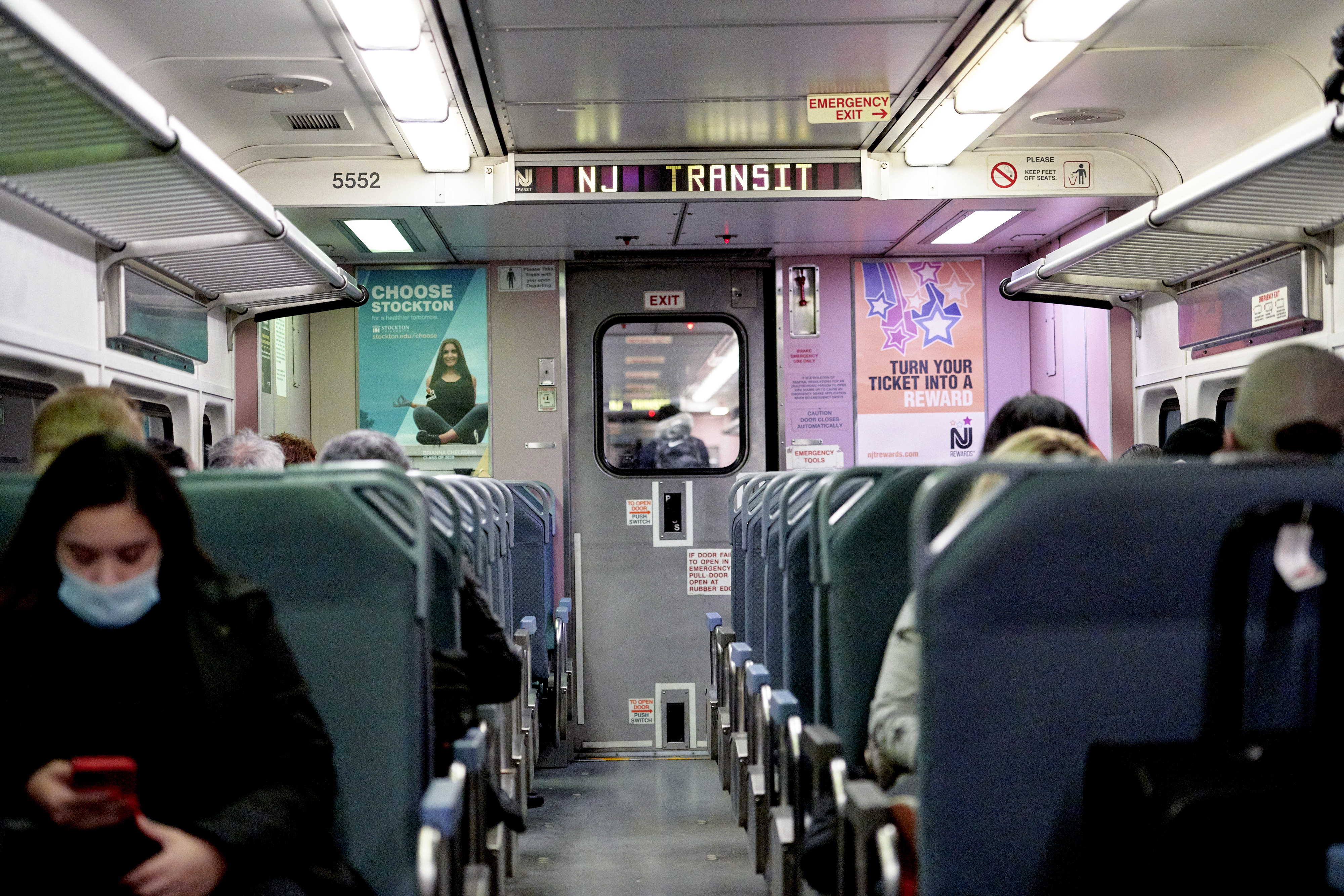 Local municipalities have always had the option to implement stricter COVID protocol than the state requires. It's not clear if Hochul and Mayor Eric Adams, who had said earlier this month he wasn't yet ready to lift the subway rule, are aligned on the plans.

The Democratic governor said last week she intended to keep masks for the "short term," but didn't elaborate on what that might mean. Hochul has consistently opted to announce final decisions on easing any COVID rules until just before any related order is set to expire in order to ensure she has the latest data, she says.

Facing questions about the mandate after a federal judge's decision voided the national rule last week, Hochul emphasized that it was a federal judge's procedural overturn, not a shift in perspective from the federal health agencies overseeing the pandemic, that ended the national mask mandate for travel. The CDC still encourages mask-wearing, especially in congested settings where vaccination status can't be determined.

The Justice Department said Wednesday that it would be appealing a ruling which lifted the travel face mask mandate, after the CDC determined masks continue to be necessary for the public good.

Hochul has said she hopes it won't be the rule of thumb in New York much longer. Recent comments from Dr. Anthony Fauci on the COVID pandemic support that idea, even as the Empire State battles a viral uptick that has it accounting for 23 of America's 40 high-risk COVID counties, according to CDC data updated Tuesday.

New York City numbers have been holding strong, though, with core viral metrics steadily among the lowest, if not the lowest, across the state's 10 regions. And Central New York, which saw significant community spread tied to omicron subvariants BA.2.12.1 and BA.2.12 this month, is seeing its COVID numbers level off, Hochul says.

State COVID hospitalizations, a far more critical benchmark than cases at this point in the pandemic, have stayed manageable. The rolling rate of new COVID admissions per 100,000 residents is up considerably these last few weeks but drastically below the unprecedented surge fueled by omicron's peak in January, data shows.

About half of new COVID admissions statewide involve people who weren't admitted for the virus in the first place, suggesting those cases are minor, Hochul has said.

And for those concerned about the latest numbers, she and her health department commissioner continue to remind New Yorkers the same measures continue to work.

"Our best weapon against this virus is the vaccine, so if you haven't, get your vaccination and make sure to get boosted for additional protection when you're eligible," Hochul said in a statement Tuesday. "If you have any symptoms or feel unwell, get tested. If you are positive for COVID-19, talk to your physician about treatment and limit your exposure to others. Let's all continue to do our part to move forward safely through this pandemic."

Find out all the latest on the mask mandates here, including how tri-state transit operators and agencies have adjusted their protocol since last week's ruling.

Here is where local public transit agencies stand when it comes to mask requirements following news of the federal judge striking down the CDC mask mandate.
Copyright NBC New York