"Thanksgiving was not a day or a weekend. It was the commencement of the holiday season, and the holiday season means increased social activity," Gov. Andrew Cuomo warned Tuesday. "The rate will likely continue to go up"

New York City's health commissioner issued a new public warning Tuesday advising adults 65 or older and people with preexisting conditions who are at an increased risk of severe COVID-related illnesses to limit nonessential activities outside the home effective immediately.

Household members and caregivers of high-risk people are also advised to avoid going out except for essential purposes like medical care, grocery shopping and pharmacy necessities. Those people should also wear masks inside their homes if they live with someone at risk. Vulnerable people shouldn't have guests, either, city officials pleaded Tuesday as they said hospitalizations had doubled in just the last three weeks and are now at their highest levels since early June.

"This escalation unfortunately follows a tragically familiar pattern," a somber NYC Commissioner of Health Dr. Dave Chokshi said. "Cases grow. Hospitalizations follow. And sadly, too many result in critical illness or even death."

The urgent messaging comes as COVID spreads anew in New York to the point where Gov. Andrew Cuomo said "the valve no longer controls the spread." That statement effectively concedes that throttling indoor dining, gyms and other indoor activities statewide at this point has limited impact, with 65 percent of all new COVID cases in New York traced to small household gatherings.

Instead, he is focused on keeping schools open and shoring up hospital capacity as the state braces for the dreaded post-Thanksgiving effect that officials warned of for months. Any holiday surge would compound what has already become a resurgence, with new daily cases increasing seven-fold over the last month or so. Cuomo reported more than 7,200 new cases in New York Tuesday, about 3,000 short of what the state was seeing on a daily basis at the peak of the crisis.

With COVID cases continuing to rise in New York CIty, Mayor BIll De Blasio has issued an advisory for all at-risk individuals in an attempt to prevent another hospital spike. News Four's Gus Rosendale has the latest on how New Yorkers are reacting to the precautions

Total statewide hospitalizations have more than tripled in the last six weeks as well -- and while those and fatalities are still overwhelmingly lower than they were at the height of the pandemic this past spring, both metrics have steadily climbed as cases have surged. Hospitalizations topped 3,700 as of Tuesday, Cuomo said, an alarming volume not seen in New York since late May.

His top priority is to ensure hospitals have the capacity to deal with the increased patient load -- a tall order given that he says "literally every region" in the state is dealing with a hospital issue already. Resource distribution is becoming difficult.

"We're going to have a problem in the hospitals, I'm telling you that right now," he said at the time. "It's going to be a serious situation."

Nurse at the Montefiore in New Rochelle have gone on a two day strike, arguing that the hospital is understaffed, unsafe, and ill-equippted to handle another COVID surge. News Four's Marc Santia has the latest on the strike and how Montefiore is responding to the walkout

Hospital and ICU bed capacity was a core requirement for New York's regions to take their first steps out of PAUSE back in May. Cuomo wanted at least 30 percent of each left open in the event of a viral resurgence. As of Tuesday's report, only 28 percent of hospital beds were available statewide. New York City and Long Island had the least open (23 percent and 24 percent, respectively) and both regions had fewer ICU beds available than Cuomo wants to see.

Cuomo has ordered hospitals to identify retired doctors and nurses to return to the frontlines, confirm a 90-day PPE stockpile, and increase bed capacity by 50 percent. Elective surgeries will be halted in regions when necessary, starting with Eric County on Friday. The governor has warned the state could revert to PAUSE if the hospital system becomes overwhelmed. And his concern is mounting.

"Thanksgiving was not just one day or weekend - it was the commencement of the holiday season, and the holiday season means increased social activity, which means an increased viral transmission," Cuomo said Tuesday, adding that he hopes the rate of infection will stabilize come January. "The rate will likely continue to go up through New Year's." 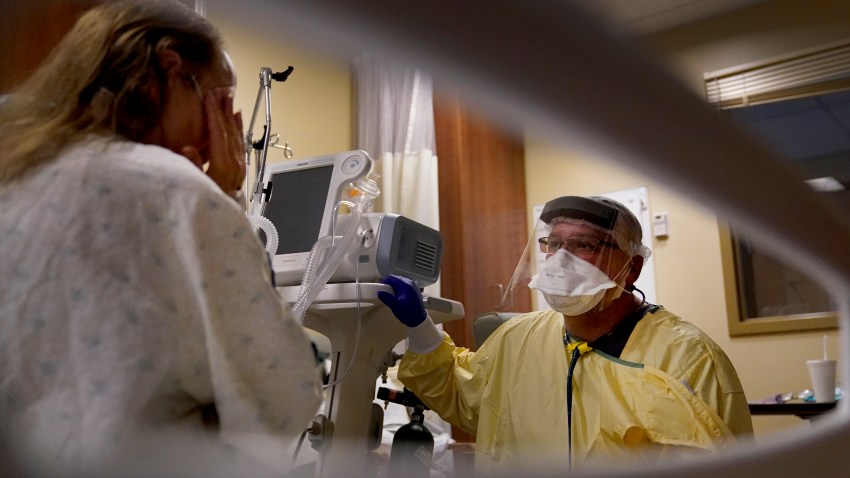 Many experts fear that post-Thanksgiving effect will dramatically exacerbate an already dire situation. Dr. Anthony Fauci, the director of the National Institute of Allergy and Infectious Diseases, said that travel and collective COVID fatigue will fuel a secondary surge on top of the current intense surge.

"As we go for the next couple of weeks into December...we might see a surge superimposed upon that surge that we're already in," Fauci said Monday.

In a one-on-one interview Tuesday afternoon with NBC New York's David Ushery, Fauci said it was hard to say if another stay-at-home order could be coming for the tri-state as a result of the rising cases.

"All of us in the health sector and people in the public health group feel that if we do the really standard kind of things that we recommend all the time ... that you can avoid having resort to a lockdown," Fauci said, adding that uniformly adhering to the health measures "definitely" has a positive impact on flattening the curves of surges or preventing them altogether.

Fauci also repeated the refrain to "close the bars, support the people who own the bars, and keep the schools open," saying that the spread is much less than expected among children, but people gathering inside for food and drinks is an ideal setting for the virus to spread. Part of Gov. Cuomo's winter plan calls for enhanced testing and prioritizing keeping schools open, among other measures.

The two are mutually dependent for the nation's largest public school system, which will reopen its doors in person next week for pre-K and elementary students after a two-week closure triggered by Mayor Bill de Blasio's controversial positivity rate threshold. As part of the phased in-person reopening approach, de Blasio will phase out hybrid learning for those young students. Schools that are able can return to a five-day-a-week schedule for elementary kids as soon as next week. Weekly COVID testing will be in effect for students and staff when they do.

Middle and high school students won't be back in a classroom until next year, though, as the city fine-tunes its testing resources and other approaches with the goal of keeping in-person learning open as long and safely as possible.

"If we are not successful in driving down these numbers soon, of course, there's a real possibility of much greater restrictions. So we have to do this work individually," de Blasio said. "We're fighting with everything we got against this second wave bearing down on us, but we have the tools to fight back."

Calculate Your Spot in the Coronavirus Vaccine Line

A federal stimulus plan would help school matters and beyond, de Blasio has said. Across the river, New Jersey Gov. Phil Murphy agrees.

He recently restricted indoor dining hours and banned bar seating, dealing yet another blow to struggling restaurants and their staff. On Monday, he imposed new limits on outdoor gatherings for the second time in two weeks, saying they'll be capped at 25 starting Dec. 7. Until last month, that capacity cap was 500.

Murphy also announced a soon-to-take-effect ban on indoor youth and school sports through the rest of the year as the state combats a steadily rising rate of COVID-19 infections with many more major holidays still to come.

New Jersey's Health Department is advising residents against all holiday parties with nonimmediate household members for the rest of the year, as it did ahead of Thanksgiving. Now even visits to Santa Claus should be from a distance, too.

"If malls offer in-person visits, they should be socially distant and reservations. Children shouldn't sit on Santa's lap," Murphy said.

There is help coming on the horizon, in the form of vaccines. Late Tuesday, an advisory group with the Centers for Disease Control recommended health care workers and residents of long term care facilities and nursing homes be the first to get the coronavirus vaccine, once it is authorized. Roughly 24 million Americans make up those groups.

Vaccines could start rolling out by the end of the year, Dr. Fauci told News 4, they won't be widely available until sometime in the spring or early summer of 2021.