NYC Health Commissioner Dr. Dave Chokshi, who himself battled COVID early in the vaccine rollout, was on hand along with Mayor Bill de Blasio and about 2,500 marchers representing 260 groups of essential workers

New York City held its first ticker-tape parade Wednesday in nearly two years, an emotional, confetti-bedazzled trip down Manhattan's iconic Canyon of Heroes to honor the essential workers who helped guide the one-time COVID-19 epicenter through the worst public health crisis in more than a century.

Sandra Lindsay, a Queens critical care nurse and the first person in the U.S. to get a COVID vaccine shot in December, served as the parade's grand marshal.

“What a difference a year makes," said Lindsay. “Fifteen months ago, we were in a much different place but thanks to the heroic efforts of so many – healthcare workers, first responders, frontline workers, the people who fed us, the people who put their lives on the line, we can’t thank them enough.”

There were 14 floats representing 260 different groups of essential workers, making it one of the biggest ticker-tape parades in the city's history. (Watch some of the highlights here, from the most emotional moments to your daily dose of cute.)

About 2,500 people marched, representing first responders, healthcare workers, grocery and bodega staff, educators, sanitation, utility and transit workers and others. Ten marching bands were also there to musically illuminate the festivities. City sources estimate the size of the crowd to have been around 100,000 people.

The parade kicked off at 11 a.m. at Battery Park and traveled down Broadway's Canyon of Heroes, the iconic stretch that has hosted parades honoring world leaders, celebrities and winning sports teams. The last parade before the pandemic honored the U.S. women's soccer team after their 2019 World Cup win.

The people who helped get New York City through the pandemic were honored at a parade. City officials say the event Wednesday celebrated a range of people, including workers in health care, transportation, education and infrastructure. NBC New York's Ida Siegal reports.

Earlier in the pandemic, New Yorkers across all five boroughs engaged in a community clap for healthcare workers on the front lines of the pandemic nightly at 7 p.m. That mass public recognition eventually lapsed, but the gratitude stayed.

One group, known as Social Distanciers, keeps the 7 p.m. salute alive with song and cheers to this day. They were given a place of honor near the front of the march, where they joined their own honorees to recognize how far the city has come.

While the parade celebrated frontline and essential workers, one group who marched has has been at the forefront of cheering on health care heroes every night — a tradition that continues, even as the city recovers. NBC New York's Gus Rosendale reports.

Mayor Bill de Blasio, who had vowed at the peak of the crisis in April 2020 to make a frontline hero parade the first ticker-tape festivity once New York emerged from the pandemic, says it's a fitting tribute.

“They deserve a march down the Canyon of Heroes because it’s something that is reserved for the greatest folks in history. Well, here are some of the folks who made history in New York City’s toughest hour,” he said. 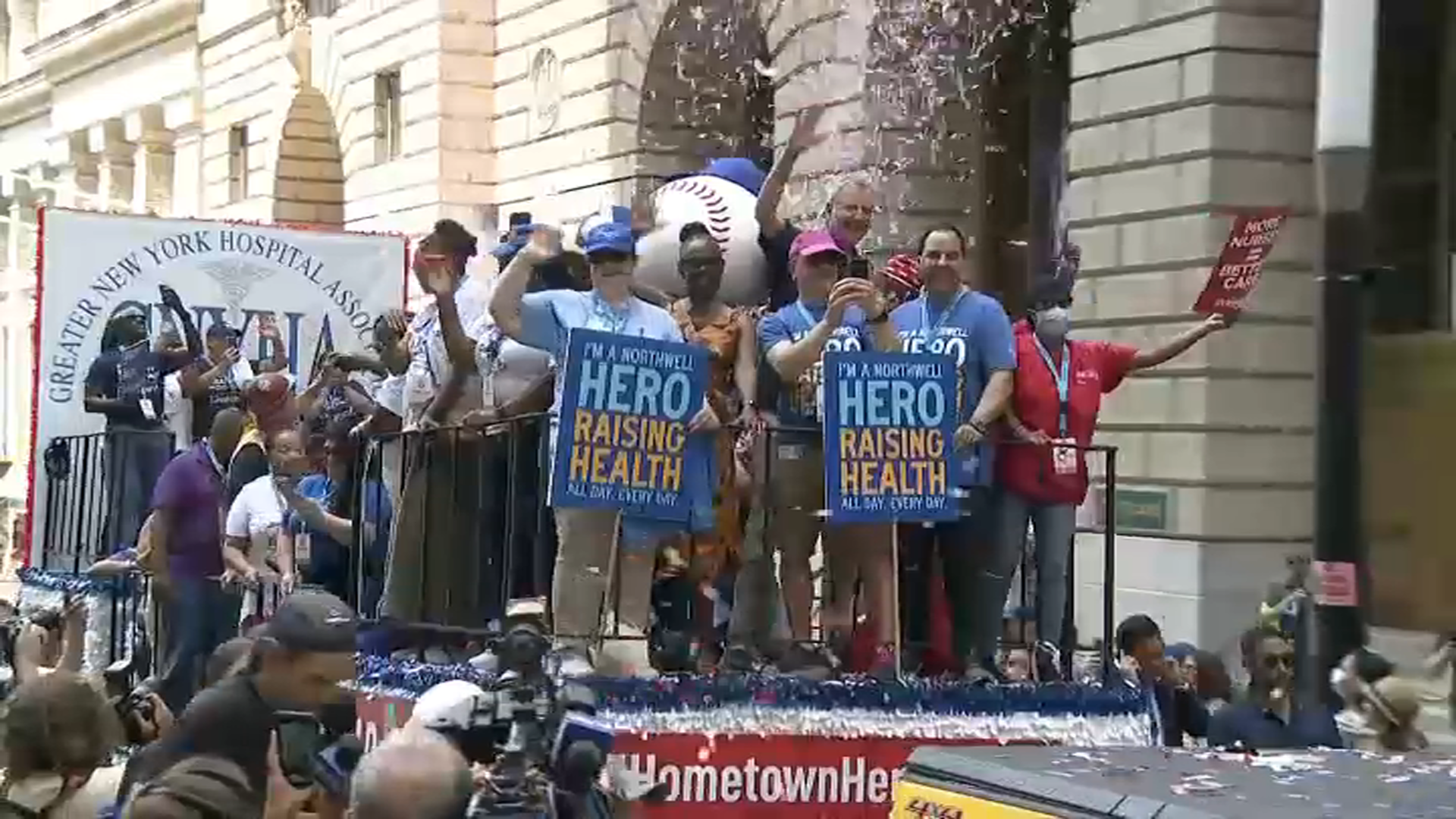 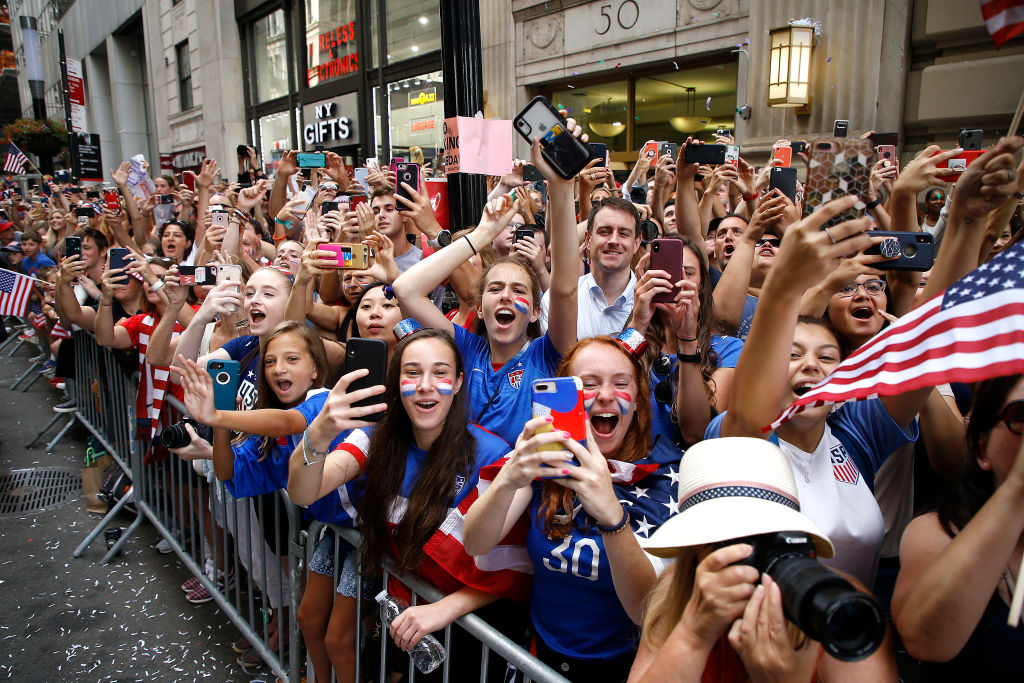 Justin Davis is one of those heroes. He started working as a nurse in a Manhattan hospital last spring, trying desperately to help patients stricken with the coronavirus while worried for his own health.

The 43-year-old Pittsburgh, Pennsylvania, resident was among those who stepped up to come to New York City when it was a pandemic epicenter, a choice that required leaving behind his wife and three young children for a situation filled with uncertainty and risk.

“I came because I wanted to do something to make my family proud," the military veteran said.

His family got a chance to express their pride on Wednesday, along with a whole bunch of New Yorkers.

Families of essential workers are in Manhattan celebrating their family members during the ticker-tape parade in their honor. NBC New York's Sarah Wallace reports.

Davis was on a float sponsored by AMN Healthcare, the staffing company he works for that sent him to New York City and then other places around the country in the last year to work in COVID-swamped hospitals.

“I think it's just going to be real cool," Davis said ahead of the party. “And hopefully it can just bring closure."

His wife, Jennifer, said it would be "huge."

“This is awesome," she added. "We just had to come up here and be here for him, to support him and celebrate him."

As the healthcare heroes who helped the city's sickest during the pandemic were honored, so were some of the lesser-known essential workers — bodega workers, street vendors, sanitation employees and more who kept the city fed and moving during dark times. NBC New York's Natalie Pasquarella, Andrew Siff and John Chandler report.

New York City Health Commissioner Dr. Dave Chokshi, who himself battled COVID-19 in the early stages of the vaccination rollout, was also on hand to celebrate.

"We're feeling a lot of gratitude for all of the sacrifices that people have made -- missed family meals, sleepless nights, weekends working -- all the things that helped to keep New York City safe over the last 18 months," Chokshi said. "We're also feeling some reflection, some sadness, of course, for the people who aren't able to join us and celebrate as we are today and we'll always keep those memories in our hearts at the same time."

"We're looking forward to writing the next chapter. Our work isn't done yet, and the New York City Department of Health is committed to making sure that as many people get vaccinated as possible so that our recovery can continue and we have a future that's better and stronger than the past," he added.

As much as it was a celebration, the parade was also a somber reminder of the pandemic's lingering toll. Some marchers had signs paying tribute to essential workers who died of COVID-19.

The crowds along the route were sparse, due in part to many businesses still operating remotely. And, noting the rising prevalence of COVID variants, Lindsay used her role as the parade's grand marshal to encourage people to get vaccinated.

Also participating in Wednesday's parade: dozens of doormen, airport workers, security officers and cleaners who were among the 85,000 32BJ union members designated as essential workers at the start of the pandemic.

Among them were concierge Ardist Brown, who helped feed tenants at the Upper West Side building where he works even after contracting COVID-19 himself, and cleaner Anna Luczaj, who cleaned medical facilities at NYU Medical Center.

More than 150 New York members of 32BJ, which is the country's largest property service union, lost their lives to COVID-19 -- and many others lost family members. Wednesday's parade honors all of them, and tens of thousands more.

The extreme heat cut into the celebration plans somewhat. Originally, the parade had been scheduled to be followed by a ceremony at City Hall.

Instead, the mayor and his wife applauded the participants at the end of the route. Water was made available throughout the parade and cooling stations for participants were positioned at the beginning and end.