Mayor Eric Adams says the citywide mask mandate for 2-to-4-year-olds in all early childcare settings will end on Monday, June 13, given improvements in core COVID rates across the five boroughs

New York City's health commissioner says there's "good news" to report as the city looks to emerge from its most recent COVID-19 wave, which saw all five boroughs vault into the CDC's top risk category for community viral spread for the latter half of May.

While the city health department still indicates a high alert level, a series of tweets from Dr. Ashwin Vasan indicate a downgraded alert appears likely to come with the newest data set. The CDC's latest community transmission level map shows more areas throughout the tri-state now being considered medium or even low risk.

"Cases have fallen since May 23, giving us confidence that we have passed the peak and we are heading into a safer environment," the city's top doctor wrote in his thread.

Vasan noted that case rates fell about 26% between May 23 and June 5. Hospitalizations and deaths, the more critical indicators from a public health perspective, have also fallen over the last week, based on average rates, though never saw the same levels of increase associated with earlier waves from omicron and delta.

That aspect will be one of many city health officials evaluate as they assess the latest wave. Experts believe it to have been fueled by a highly contagious omicron subvariant, BA.2.12.1, that was said to be up to 25% more transmissible than the previously most-transmissible omicron descendant that preceded it. Data has shown no evidence to date that this particular subvariant, which overtook New York City and the rest of the state at a much faster pace than it did America this spring, based on CDC data, is linked to more severe outcomes or is more resistant to vaccines. More study is needed.

"There will be a lot to learn from this wave, such as how the ratio of cases to hospitalizations and death did not follow the same patterns as the past, and how treatment and vaccine-induced immunity influenced that trend," Vasan wrote.

In the meantime, he offered a "great job #NYC" and thanked the public for renewed efforts like masking up, hand-washing and staying home when sick -- along with continued vaccinations and boosting efforts -- for helping to stem the latest tide.

Vasan also reminded New Yorkers of the all-too-familiar cautionary phrase -- "COVID-19 is still with us" as he said the health department continues to strongly recommend people wear face coverings in indoor public settings regardless of vaccination status.

Twitter reaction to the commissioner's thread was swift, with many asking whether the city would lift its contentious toddler mask mandate now that the threat has ebbed.

Mayor Eric Adams addressed that almost immediately, saying masks would be optional for 2-to-4-year-old children in all early childcare settings throughout New York City beginning on Monday, June 13. He did reiterate Vasan's mask recommendation for indoor spaces, however, and pledged to keep making face coverings available to all.

Other Twitter users questioned Vasan on data validity, given the lack of inclusion of at-home test data in city COVID case rates. More raised eyebrows over his apparent credit to New Yorkers' behavior for slowing the wave, citing other major cities in the United States that saw a similar curve without pushing renewed mitigation efforts at all.

There is some anecdotal evidence to support the last point. Many have reported drastic reductions in the numbers of New Yorkers wearing masks in the subway system. Face coverings remain required in all public transit settings but enforcement in recent weeks appears to be far less aggressive than it was at other peaks during the pandemic.

“I have always said that the science will guide us out of the pandemic, and because we have followed the data, which shows that cases are steadily falling, we‘ve beaten back the latest COVID-19 surge. New Yorkers stepped up when we needed them most and have put us on the path to lower risk," Adams said in a statement. "I’m with New York City parents and New Yorkers can trust this administration to continue to make the proper public health decisions to keep our kids safe."

As COVID cases rise again, the FDA has authorized a booster dose of the Pfizer vaccine to children ages 5-11. Erica Byfield reports.

In the CDC's most recent risk update, which covers the week ending June 9, the number of U.S. counties deemed to be at high risk for community COVID spread actually increased from the prior week, going from 241 up to 314.

It is better news locally, as the tri-state continues to see numbers go down. The latest numbers from the CDC show the majority of tri-state counties, including all five boroughs of NYC and most counties directly adjacent to the city, now at medium or low risk. There are still eight counties, including northwestern New Jersey and all of Long Island, considered to be high risk, however.

Places like Westchester and Putnam counties in New York were considered high risk in the previous update, but improved to low risk on the map updated Thursday. Connecticut's Fairfield County is now considered low-risk, according to the CDC.

Though the city relies heavily on the CDC's benchmarking system for its own guidance, it has yet to lower its alert level from high. The city health department website continues to show average rolling case and hospitalization rates above their respective thresholds of 200 new daily cases per 100,000 residents and 10 new hospitalizations per 100,000 residents. That assessment only reflects COVID data through June 6, though, and the alert level does appear likely to change in fairly short order.

Under that system, the current COVID alert means masks are recommended indoors for all, regardless of vaccination status, but no new mandate applies. 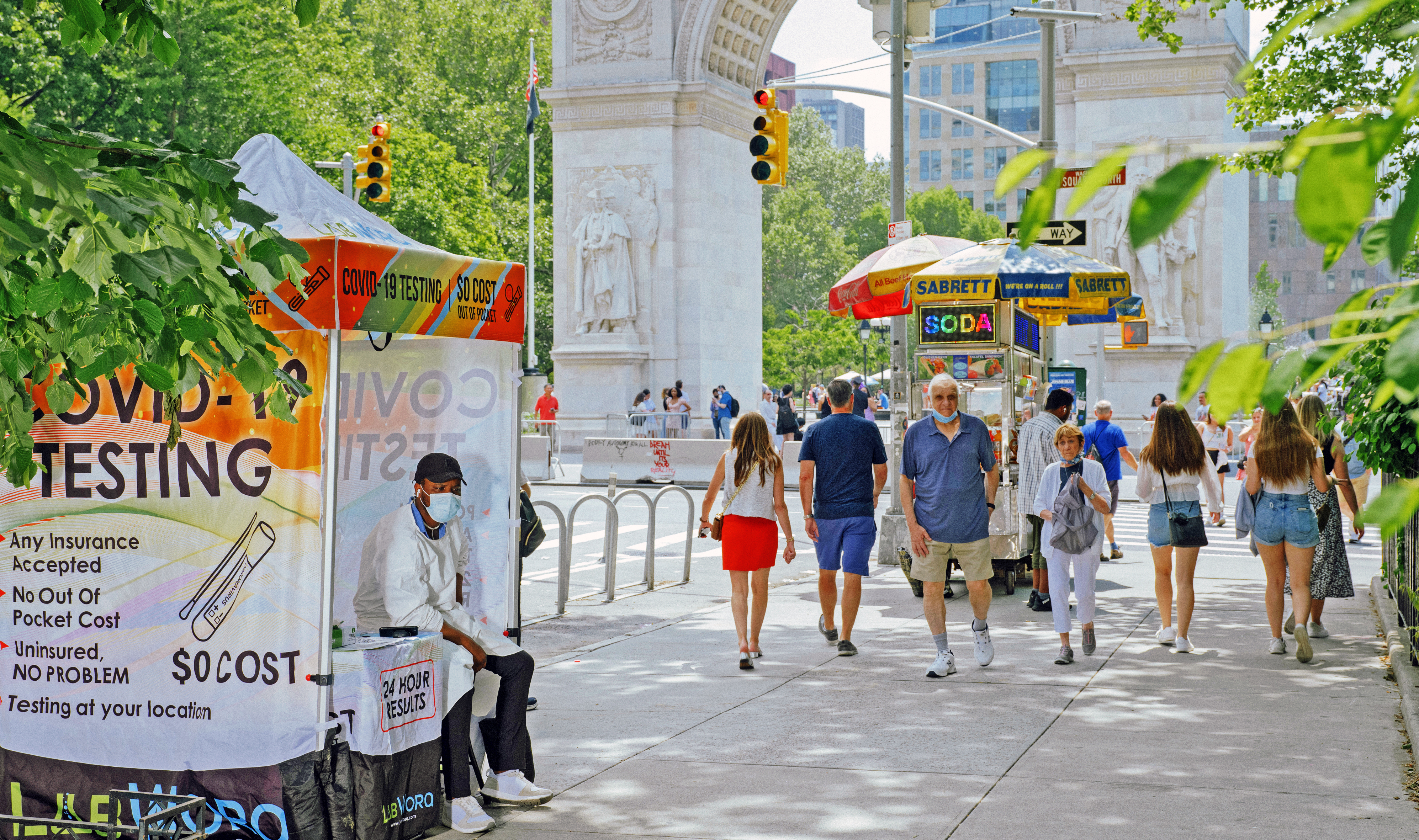 NYC Now Offers Personalized COVID Guidance. How to Get Yours Free Right Now 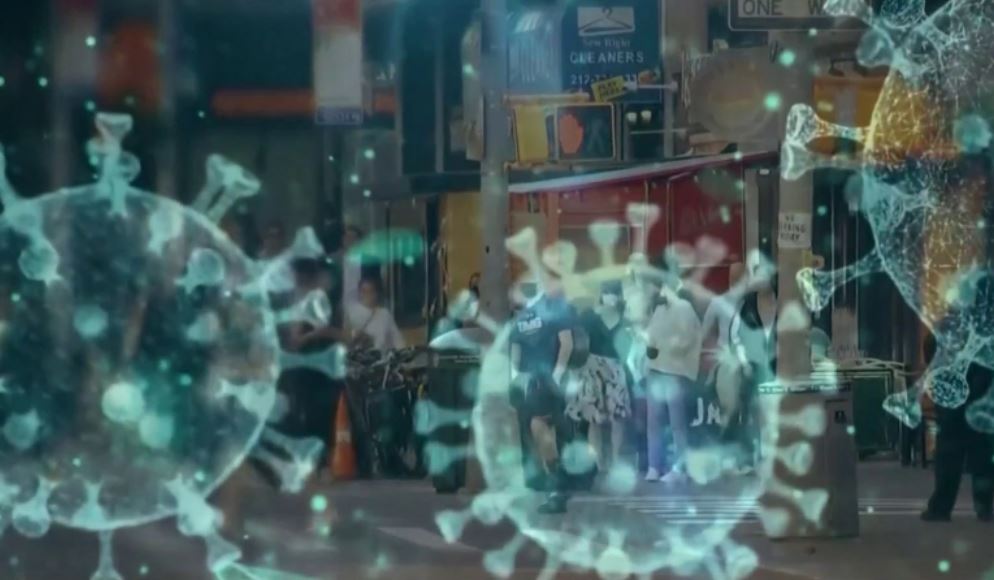 Connecticut, which also saw cases associated with the subvariant rise, have seen their COVID community risk ease substantially in recent weeks as well, according to the CDC. In its latest update, the CDC had just one of Connecticut's eight counties at high-risk status -- a reversal from the week before, when all but one county in the state was considered to be at high risk. New Jersey has seen a slower plateau, with 12 of the state's 21 counties still considered high risk and the other nine deemed medium risk.

Still, the Garden State, like other states still struggling more with the latest wave, shouldn't have to wait much longer to see improvement if the trends hold.

New Jersey health department data shows a transmission rate below 1.0 (0.86), which is not considered to be an active outbreak. Daily deaths are in the low single digits.