More than 9,000 New Yorkers are now hospitalized with COVID-19, Gov. Kathy Hochul said Monday, surpassing the levels of January 2021's peak surge and reaching levels not seen since May 2020 as omicron's infectiousness continues to envelop the Empire State at a rapid pace.

Statewide hospitalizations stand at 9,563, 290 admissions higher than the most recent peak on Jan. 18, 2021 and a 790-patient increase since Sunday. The total marks a 199% increase in the last month alone and a five-fold increase since Nov. 1. Daily deaths hit the triple digits (103) on Monday for the first time since vaccinations became widely available early last year.

New daily cases dropped a bit to around 51,700, though with less testing done and lags in reporting over the holiday weekend, Hochul called that number misleading and said she is certain the overnight counts will climb.

"Those numbers are going to be much higher tomorrow. They didn't go from, really, 90,000 to 51,000. That is simply a function of people not getting tested over the weekend," Hochul said as she shared "shocking" rolling rates. "This is not the wave we saw last year, where it kept just going up and up. It's just going straight up."

More than 335 New Yorkers per 100,000 are testing positive over the latest seven-day average, Hochul said. New York City has the most elevated numbers by far -- 457.75 new cases per 100,000 residents, followed by Long Island (398.82) and the Mid-Hudson region (304.18). Those three regions have the three highest adult full vaccination rates among New York's 10 regions, yet their density makes them more vulnerable to viral spread from a variant as formidable as omicron, officials say.

Hospitalization rates per 100,000 residents showed a bit more of that vaccination impact. The Finger Lakes, which are among the state's least fully vaccinated regions have the second-highest rolling hospitalization rate (42.1 per 100K), a hair higher than New York City (42.0). Long Island now has the highest (43.4 per 100K), but the influx of hospitalizations is affecting regions like the Finger Lakes in terms of available bed capacity than denser areas like New York City.

The number of hospitals that have had to pause elective surgeries because of bed capacity below 10% shrunk to 21 as of Monday, down from 25 last week and 32 in late November. That's good news, Hochul said -- but cautioned the situation can rapidly turn in the other direction "and at that point, we'll be deciding whether we need to take wider steps and we're ready to do it. We have the plans in place, we're just watching this for a couple more days to see what those steps might be."

Ultimately, there's no sugarcoating any component of the numbers right now, Hochul said from Rochester on Monday.

"We're not in a good place. I'm going to be really honest with you. This is the winter surge that we predicted," the governor said. "There's a lot of human interaction and what happens when humans gather? They spread the virus. And we fully anticipate on top of the surge that's ongoing, there's going to be another wave that's occurring as a result of these holidays."

If history is a reliable indication, Hochul says she doesn't expect a decline in core viral rates across New York until the first week of February at the earliest.

The Democrat reported a pandemic-obliterating single-day high of 85,476 new cases on Saturday. More than one in five New York COVID tests are coming back positive these days -- and that number climbs to almost one and three when looking at New York City. The exponential trend has shown no signs of slowing.

COVID-19 omicron variant symptoms can be as mild as a sore throat or the common cold, meaning thousands of positive cases may never be detected. And with at-home tests now widely available, the true daily totals may never be known. 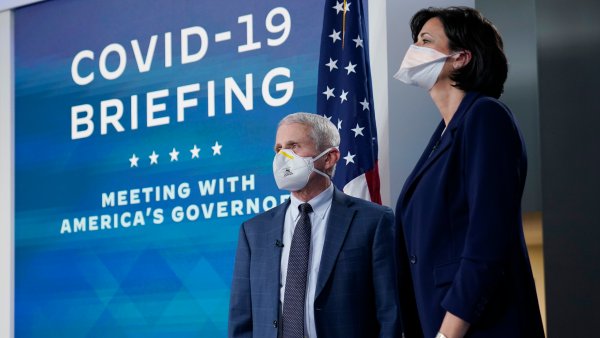 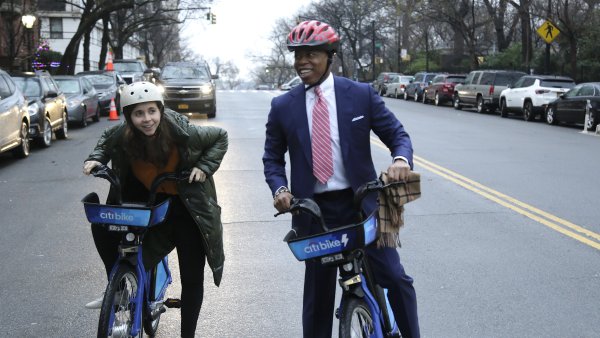 Still, officials repeatedly insist this "this isn't March 2020 or even January 2021," given the impact of vaccinations on severe COVID cases. Unvaccinated New Yorkers are being hospitalized at a rate of 30 per 100,000, while just 2.1 of every 100,000 vaccinated ones are experiencing symptoms that require hospitalizations.

About half those patients are in New York City, where 50 Federal Emergency Management Agency ambulance teams are due to start arriving early this month, Hochul said. Thirty federal ambulance teams have been dispatched elsewhere.

Under a revamped winter surge plan outlined by the governor just before the new year, Hochul extended her current "mask or vax" mandate for all businesses until Feb. 1 (it had been set to expire on Jan. 15) and warned another extension may be warranted. She also plans to double down on the test-to-stay policy for schools, funneling kits and other related resources to hundreds of districts to help them stay open safely. Six more state-run testing sites will also come online this week.

Concerns over testing and the spread of the highly transmissible omicron variant have many wondering what will come of schools as students return from winter break. NBC New York's Jessica Cunnington reports.

New York also has a stash of 5 million KN95 masks heading out to counties across the state, with hundreds of thousands earmarked for nursing homes. Shoring up nursing home safety is a cornerstone of the state's efforts to protect the most vulnerable, and in order to do so, Hochul said the state has asked the federal government for the ability to restrict visitors who are not vaccinated.

The omicron variant, the first local case of which was reported Dec. 2, accounted for 90% of genetically sequenced positive New York samples uploaded to GISAID, the world's largest repository of COVID-19 sequences, over the last two weeks. That number is thought to be artificially low, though, given weekend reporting lags.

CDC data has yet to be updated for the latest week. As of the latest update, the week ending Dec. 25, the agency says omicron could account for anywhere from 70% to 97% of current infections in the New York area. Nationally, the prevalence is estimated to be as high as 74%, the agency says.

The FDA on Monday authorized Pfizer booster doses for kids aged 12 to 15, which officials expect will extend protection to millions more Americans who are eligible.