'We have to get back to that normalization of vaccinations and forget all the Republican rhetoric, which is killing people ... I'm sick and tired of what I'm seeing going on in other states," Hochul told MSNBC Wednesday

Newly sworn-in Gov. Kathy Hochul sought to lay down the foundation for her administration's response to the pandemic on her first days in office, reimplementing a mask mandate in schools, outlining plans to combat the delta variant and offering promised gestures of transparency on multiple fronts.

Hochul included New York state's total COVID-19 death toll as reported to the CDC in her first daily COVID release issued Tuesday -- a count that is more than 10,000 deaths higher (55,395) than the state's (43,415) and includes the nursing home deaths Andrew Cuomo's office said it excluded to avoid double-counting them.

"We're now releasing more data than had been released before publicly. So people know the nursing home deaths and the hospital deaths are consistent with what's being displayed by the CDC," Hochul told MSNBC Wednesday. "There's just a lot of things that weren't happening, and I'm gonna make them happen."

In what was another blow to what's left of Cuomo’s legacy, Hochul said on NPR that "the public deserves a clear, honest picture of what’s happening. And that’s whether it’s good or bad, they need to know the truth."

“There are presumed and confirmed deaths. People should know both," Hochul said later on NPR. "As of yesterday, we’re using CDC numbers, which will be consistent. And so there’s no opportunity for us to mask those numbers, nor do I want to mask those numbers. The public deserves a clear, honest picture of what’s happening. And that’s whether it’s good or bad, they need to know the truth."

The higher number is not entirely new. Federal health officials and some academic institutions tracking COVID-19 deaths in the U.S. have been using the higher tally for many months because of known gaps in the data Cuomo had been choosing to publicize.

The count used by Cuomo in his news media briefings and on the state’s COVID-19 fatality tracker included only laboratory-confirmed COVID-19 deaths reported through a state system that collects data from hospitals, nursing homes and adult care facilities.

That meant the tally excluded people who died at home, in hospice, in prisons or at state-run homes for people with disabilities. It also excluded people who doctors believed died of COVID-19 but never got a positive test to confirm the diagnosis. Such tests were scarce in the initial months of the pandemic, when hundreds of New Yorkers were dying each day.

In a statement issued hours later, Cuomo spokesman Rich Azzopardi said that the state "reported daily and clearly labeled confirmed COVID deaths. At the same time, the CDC requested 'presumed' COVID deaths, which are not labeled confirmed. New York always reported these numbers and they were always publicly available." He didn’t address why the state had chosen not to add deaths outside hospitals and nursing homes.

The 62-year-old Democrat plans a bevy of additional announcements later this week, including a series of concise COVID-related policies for schools. She ordered in-person ethics training for all state employees as she vies to transform the culture in Albany is working to accelerate state rent relief stymied by the pandemic.

"I was shocked to find out that every New York state employee is not required to even have ethics training. Yesterday I declared that over," Hochul said Wednesday. "I don't engage in drama, I don't have time for that. It's all about getting things done."

The governor said in her first official public address that her top priority is safely getting children back to school. Hochul said she was directing state health officials to make masks mandatory for anyone entering public or private schools. Her administration will also work, she said, to implement a requirement that all school staff statewide either be vaccinated or undergo weekly COVID-19 testing.

“None of us want a rerun of last year’s horrors with COVID-19,” Hochul said as she stressed the need for caution amid the threat posed by the still-raging delta variant. “Therefore we will take proactive steps to prevent that from happening.”

Watch the entirety of her initial address in the player below.

"There's a lot of older people who feel very insecure and invulnerable because they would have had their first shots just about eight months ago ... so I'll be having a very aggressive program to get the boosters out," Hochul said during a taped NPR segment Wednesday. "But there's still a lot of people who never got their first dose, and that's going to be a barrier to getting people feeling secure about going to schools and to work. So I'm laser-focused on those two big initiatives.

Empowered by the FDA's full approval of the Pfizer vaccine earlier this week, Hochul has also said New Yorkers “can expect new vaccine requirements.” She has yet to give any indication of what those might involve, but pledged "more on that soon."

Hochul skirted around specifics when asked about the vaccine requirements as she made the morning TV show rounds Wednesday, telling CBS she's focused on helping relieve families' anxiety ahead of the start of school next month.

More on COVID and Schools 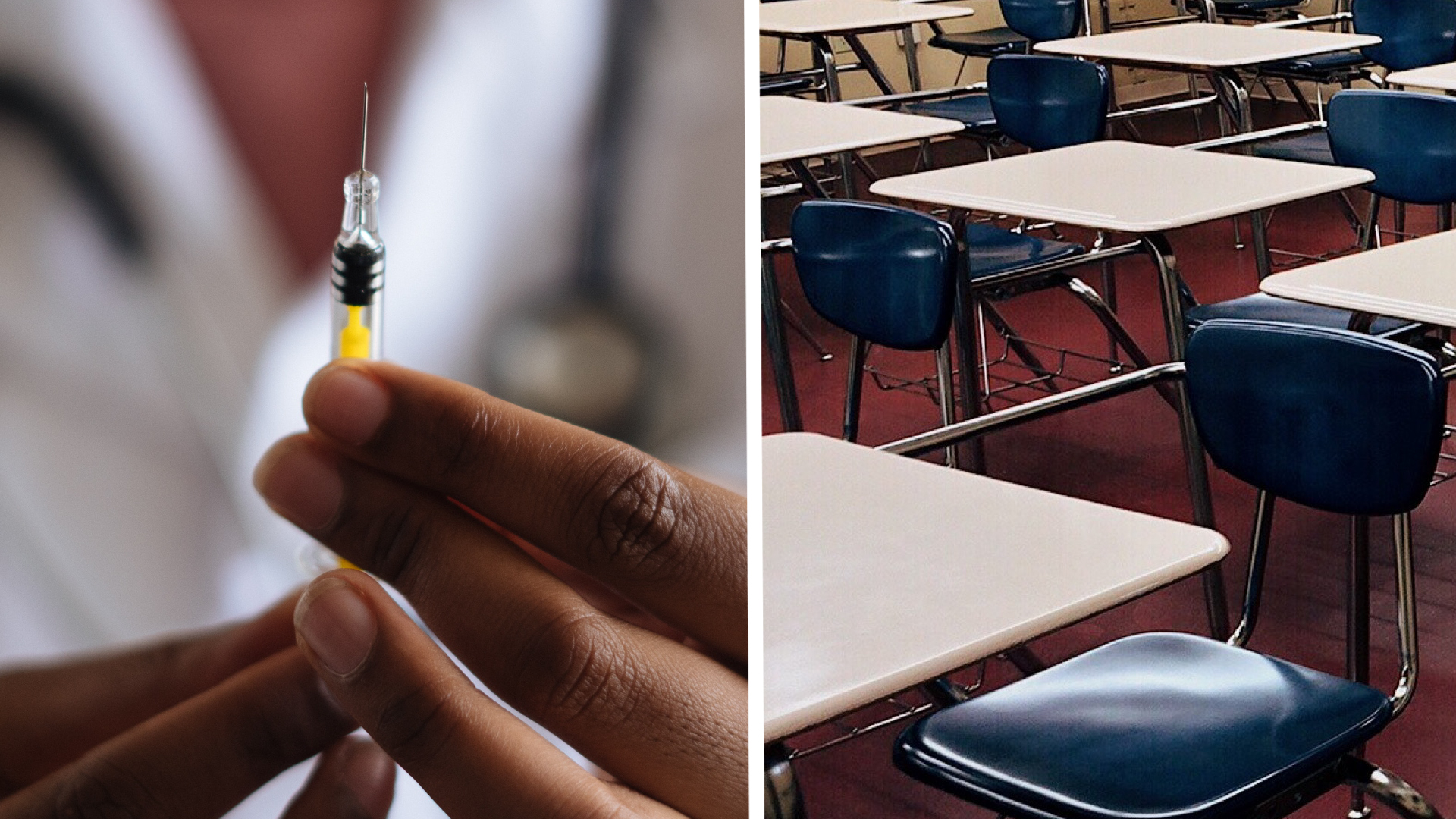 Vaccines and Masks: A Doctor Answers Your Back-to-School COVID-19 Questions

"I'm a mom. I can understand the stress levels are off the charts. So we have to, first of all, have mandatory masks, something that is not universally popular, but an important step toward getting safety in schools," Hochul said. "I don't have the executive power to mandate vaccinations in schools. But I'll be working closely to come to that conclusion by teaming up with our partners in the education community and our school superintendents and school boards. This has to happen because this has gone on too long. Our children need to be back in school."

"They need to be back in the normal learning environment because we've lost too much time, particularly for children in black and brown communities, those who come from impoverished they already start out with strikes against them," she added. "And we cannot let this continue. We need them back in school."

Meanwhile, Hochul will continue to fill openings in her administration. She vowed to "clean house" as far as the "toxic" workplace environment referenced in the state attorney general's sex harassment report on Cuomo and has already chosen two women to serve as secretary to the governor and counsel to the governor.

The in-person ethics training Hochul ordered for all state employees aims to make the process more encompassing and effective than the prior standard, where "everyone clicks through on their computer and says they've done it," she said.

"I want to make sure people have no excuses, that they understand what our policies are. I'm going to personally make sure that every young woman, women of all ages who work in this environment, as well as members of the LGBTQ community who often feel they've been preyed upon by others, I want everyone to know that my administration is going to be open, transparent, and an environment where people can just do their jobs without fear of harassment," Hochul said.

Gov. Kathy Hochul wasted no time laying out her priorities as she took over for disgraced former Gov. Andrew Cuomo. Andrew Siff reports.

"And anyone who crosses the line, they're going to have to deal with me. There's no tolerance for anyone who abuses their positions, and that's the message I'm sending," she added. "But I'm not just going to talk the talk. I'm going to make sure we walk the walk so at the end of my terms that people understand there's been a huge change in culture, and it's starting day one."

Earlier Wednesday, Hochul told "Morning Joe" that anyone in the previous administration who had been named in the attorney general's sex harassment report involving Cuomo had been removed from her administration.

In the coming days, Hochul is expected to officially announce her pick for lieutenant governor. She is expected to tap state Sen. Brian Benjamin of Harlem for the job, three sources familiar with the matter told News 4 Wednesday.

In an interview on CBS's “Face The Nation” earlier this month, Hochul said she had narrowed her search to focus on candidates from New York City.

She also said she had spoken with Mayor Bill de Blasio and knew ahead of time about the city's teacher vaccine mandate plans, pledging the two would have a far less acrimonious relationship than the one de Blasio shared with her predecessor.

"I'm running for re-election, without a doubt in my mind, I'm gonna have the continuity here," Hochul said on MSNBC Wednesday. "I want to make sure that people know that when I'm done with my administration, however many terms this goes, that they'll say, 'Yes, women can lead, they can achieve greatness. They can do good for the people of their state, leave a strong legacy of accomplishment, but get it done in a way that's so different than we've seen before.'"