Everyone age 16 and older in the tri-state has an eligibility date for their COVID-19 vaccine with New Jersey joining New York and Connecticut in announcing a date for universal eligibility.

One day before New York opens its last eligibility window, Gov. Phil Murphy on Monday announced all residents of the Garden State would be eligible to sign up for one of the federally approved COVID-19 vaccines currently in circulation. Starting April 19, everyone 16 and older can get their dose.

“With increasing supply of vaccine from the federal government, New Jersey has been ramping up the pace of doses administered and adding points of dispensing across the state, allowing us to extend eligibility to all adults sooner than expected,” said New Jersey Health Commissioner Judith Persichilli. “The Department encourages residents to get vaccinated as soon as they have the opportunity.”

The news comes the same day New Jersey expands eligibility to people age 55+ and anyone 16 and older with intellectual and developmental disabilities will be able to reserve their spot for a shot of the vaccine. The state also adds those in real estate, building and home service workers to the list, along with sanitation workers, financial industry employees, laundry service workers, utility workers and librarians.

New Jersey is set up to handle statewide eligibility. Between the many points of vaccine distribution, at least 98 percent of all state residents live within five miles of where they can get vaccinated, Murphy said. To date, more than 1.8 million people in the state have been fully vaccinated.

One in five New Yorkers have been fully vaccinated, Gov. Andrew Cuomo said Sunday. With people age 16-30 gaining access on Tuesday morning, the governor urged residents to remain patient because the demand still exceeds the supply coming from the federal government.

More people in New Jersey and New York are eligible for the COVID-19 vaccine this week as many businesses, with the exception of bars and restaurants, across the Empire State will no longer be restricted by curfew.

Not sure how the process works? Or when you might be able to get an appointment? Check out our handy tri-state vaccine site finder and FAQs here

Mask requirements and other protocols are strictly in place as New York begins to open up and loosen restrictions. Starting Monday, the 11 p.m. statewide curfew in place for casinos, movie theaters, bowling alleys, billiards halls and gyms will end. The 11 p.m. curfew for restaurants and bars as well as the 12 a.m. curfew for catered events will remain in place for now, but the governor said his health team is actively assessing the data and an updated announcement is expected in the coming days.

Still, the governor warned people against letting their guard down.

"Some people will say they're tired of COVID, the weather's warm and the death numbers are down, but the community that accepts that philosophy first will have a higher transmission rate. We all understand COVID fatigue, but the pandemic is not over," Governor Cuomo said. "There are still variants and you can still get sick, and yes people are vaccinated, but not enough of them. You're seeing communities where we did have problems and implemented significant public education to address them, but more importantly, the people knew in their community they had an issue. They saw people going to the hospital, and they responded. But people are now relaxing, and as people relax with COVID it's a problem. This is a formidable enemy. You put your hands down at your side, you think it's over, the enemy attacks. And that literally is community by community." 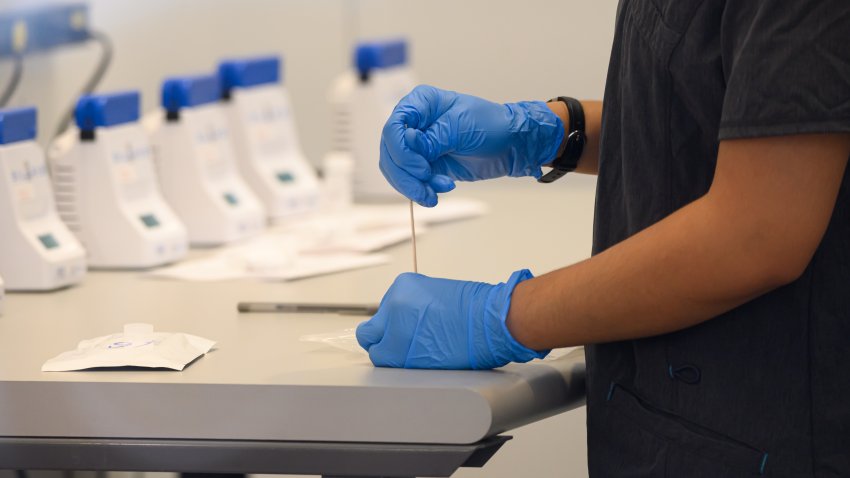 Going to a Game, Concert or Wedding? Here's Where to Find Rapid COVID Testing in NY New York's Excelsior Pass Is Now Online. What Is it and How Does it Work?

Over the weekend, Broadway theater doors reopened for the first time in more than a year as part of a statewide initiative to reinvigorate the art and culture scene with live performances.

"Broadway stars have just been classified as essential workers, and I say, 'Duh, come right in,'" Tony Award-winning actor Nathan Lane told a crowd of frontline workers spread out in the seats at St. James Theatre on Saturday.

New Yorkers are encouraged to get tested before attending events and to use Excelsior Pass to show venues that they've been vaccinated or tested before entering. Cuomo said these steps are key to a successful reopening and new guidance from the federal government last week echoed the importance of vaccinations.

While many venue operators are celebrating being able to open once again, some say it still isn't economically worth it with the limited capacities, opting to remain closed instead. NBC New York's Greg Cergol reports.

Fully vaccinated people can travel within the U.S. without getting tested for the coronavirus or going into quarantine afterward, the Centers for Disease Control and Prevention said Friday. Still, CDC Director Dr. Rochelle Walensky urged caution and said she would “advocate against general travel overall" given the rising number of infections.

“If you are vaccinated, it is lower risk,” she said.

Walensky has warned that COVID-19 variants are still a concern and loosening restrictions too quickly could lead to an increase in cases because not enough people are vaccinated. According to the CDC, more than 100 million people in the U.S. — or about 30 percent of the population — have received at least one dose of a COVID-19 vaccine. A person is considered fully vaccinated two weeks after receiving the last required dose.

It's been more than a year and a half since Yankee fans could go see the Bombers in person, and even though it was a much smaller crowd than usual, excitement was back in the air at Yankee Stadium — and at the restaurants nearby too. NBC New York's Bruce Beck and John Chandler have team coverage.

New York City Mayor Bill de Blasio expressed similar concerns over travel when the governor announced that domestic travelers coming to New York no longer have to quarantine. The mayor said Cuomo made the decision without consulting local governments and that the city would be most impacted. However, he said the new CDC guideline could be an incentive for people to get vaccinated.

"I think the more people understand that vaccination is the way to travel, the way to getting back to work, et cetera, the better off we'll be, because there's still a certain number of people who need to be motivated," de Blasio said, adding that he hopes the city's vaccination pace can outrace the variants.

Nearly 1.4 million people in NYC are fully vaccinated, or 21 percent of its adult population, according to the city's latest data. Overall, 36 percent have had at least one dose.

COVID-19 Vaccination in Your State and County

The Centers for Disease Control and Prevention reports daily numbers on the percent of people fully vaccinated based on a person's county of residence.

Source: The The Centers for Disease Control and Prevention. Note: The CDC did not release any information for Texas, Hawaii, New Mexico and some counties.
Amy O’Kruk/NBC

With the final category of New Yorkers cleared to start getting their doses on Tuesday, and vaccine supplies rapidly increasing, the city's health commissioner is eyeing the day supply overtakes demand. Commissioner Dave Chokshi said Monday current projections suggest sometime in May the city will have more vaccine than people signing up for shots.

As more people get inoculated, hospitalization and death numbers are decreasing. COVID-19 cases in New York City have also decreased but not at the same rate. New cases have been stable and at what senior health advisor Dr. Jay Varma called "a high plateau." As of Sunday, the city's 7-day average positivity rate sits at 6.26 percent.

Neither New York nor New Jersey is experiencing anything like what they saw last spring, when hospitals — and morgues — were overflowing. The improvement has also brought students back to in-person learning, though not all students have returned, de Blasio vowed they will all be back by September.

Uncertainty about school closure and concerns for their safety have led the majority of parents to opt-out of classroom learning but families have until Friday, April 9, to change their minds, the mayor announced Monday. The city is going to change its "two-case" rule that closes entire school building if two positive cases are detected. A substitute for that policy will be announced this week, de Blasio added Monday.

"This is clearly a situation where we can keep our kids and adults in the schools safe, and we can do it with a rule that will not cause as much disruption, because that's really what it came down to," the mayor said in an interview Monday evening. "We need a more stable schedule. Parents have been really concerned about this."

The new rule would keep more schools open and would minimally require more than two positive cases to force any future closures, the mayor said. The final details of the replacement rule have not been hammered out but will be later this week, he guaranteed.

UFT President Michael Mulgrew voiced disapproval in the mayor's decision to announce a change to the rule Monday morning without further details.

"A proclamation is not a plan. The city can't change the two-case rule without Albany's approval," Mulgrew said in a statement. "Any change to the two-case rule has to take the safety of children and their families into account, not the Mayor's need for a Monday morning announcement."

The mayor responded to the criticisms later Monday in an interview on NY1, saying that "the decision is clear — the two-case rule just doesn't make sense anymore."

"We want to move to a new standard that makes sense for this reality where we have now, you know, months upon months of evidence of the safety in the schools, even before vaccination was widely available and 65,000 school employees who have been vaccinated," he said. "We are convinced we'll have a better rule that'll keep schools open a lot more and be perfectly safe."

De Blasio hinted that the rule needs to change with the science, citing a scholarly journal by Dr. Varma that said about 80 percent of infections in schools were coming from the adults in the schools. "And when you get adults vaccinated on this high of level, it fundamentally changed the reality. On top of that, we already had persistently low levels of COVID in our schools now for months. So, this is a real good sign," he told WNYC last Friday.

The rising number of cases in New Jersey is leaving officials there concerned about the possibility of a spring surge ahead. NBC New York's Pat Battle reports.
Copyright NBC New York